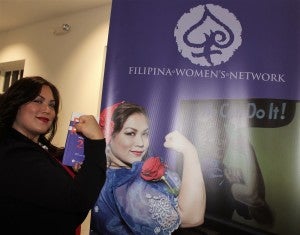 WASHINGTON, DC — “We can’t let Women’s History Month go by without calling attention to the stories of Filipina women whose culture, values, and faith make them effective leaders and managers,” said Marily Mondejar, Founder and CEO of Filipina Women’s Network (FWN). “That’s why we’ve been on a road show across the country to launch our second book on leadership.”

Mondejar is referring to DISRUPT 2.0 Filipina Women: Daring to Lead, a collection of stories by 35 authors. In this second edition, as Mondejar wrote in the Foreword, “These women took pleasure in the disruptions they initiated in their personal and professional lives that resulted in achievement.”

First lady Melania Trump may have been echoing what Mondejar has been saying when, at a women’s empowerment panel at the White House on March 29, Trump said: “Wherever women are empowered, towns and villages, schools and economies are empowered, and together we are all made stronger with them.” 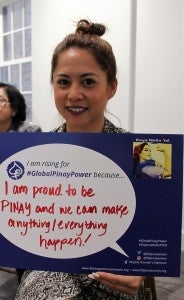 At a community forum that same day at the Philippine Embassy, a mile away from the White House, Mondejar introduced some of the authors who read excerpts from the book about their own empowerment experiences as women. They include Sonia Lugmao Aranza, President & CEO of Aranza Cross-Cultural Strategies & Global Leadership Development; Sonia Delen, Senior Vice President of Bank of America Leasing; Arlene Marie “Bambi” Lorica, CEO, Trans-Pacific Initiative; Francine Maigue, President and CEO of the Filipino American Chamber of Commerce of San Diego County; Col. Shirley Raguinding, Chief Diversity Officer of Air National Guard; and Maria Nieves Santos-Greaves, President, Surrey Hearing Care, Inc.

Aranza set the tone for the evening in her keynote remarks when she affirmed what Filipino women are all about: “Where ever we land, we bloom. No matter the circumstances that disrupt our lives, still we bloom. Whatever life throws at us through the many seasons of life, we bloom.” 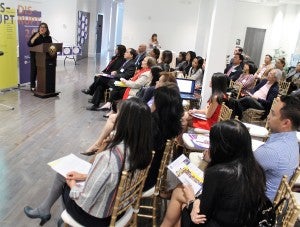 The mother of a high school senior and wife of a civil rights lawyer, Aranza recalled how she took risks and overcame fear when she decided to leave a secure position in Capitol Hill to become an entrepreneur. “Looking back at my journey, it would have been easier to stay where I was rather than to step into a future of uncertainty,” she said, reading from the chapter she wrote. In it, she points out that transformational leaders defy the “Pwede na mentality,” or “the notion of simply getting by.”

“Puwede na would have prevented all of this,” referring to the “privilege of helping to develop leaders in Top Fortune 500 companies and organizations.”

What she learned from her journey, she writes, is “no matter where you are in your personal or professional life … dare to disrupt comfortable habits of thinking and take a dive into discovering who you really are, what you really love, what matters most, and what you want to do with this impermanent life.”

‘Listen to your Lola’

In her keynote speech, DC Superior Court Judge Marybeth Raffinan congratulated the “amazing and strong Filipino women in our community” for their leadership. “Daring to lead,” she said, involves failure, resilience and grit. The 46-year-old Judge recounted how she lost her first bid to run for a high school student post, how she didn’t get into the nation’s top law schools, and how she failed to get the Judicial Nominations Commission’s nod the first time she applied. But her big break came in 2010, when President Obama nominated her. After a quick Senate confirmation, Raffinan became the first Filipino American to sit as Judge in the DC Superior Court. 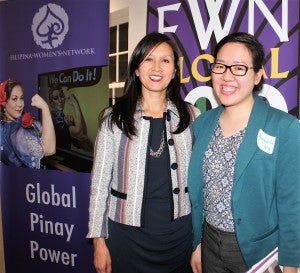 Her advice to aspiring women comes from her mother: “Nothing is right with the world if your relationship with your partner is not solid.” Their strong support, she said, is essential to one’s success. To young daughters, she counsels: “Take your time, choose well and listen to your Lola (grandmother).” Apparently, her nine-year-old daughter is in a hurry to follow in her mom’s footsteps.

Raffinan, who is often mistaken for another Asian woman, says “We sometimes have to be bigger, better and stronger than the rest, and if it means we have to overprepare and work that much harder, self-awareness and grit will get us there.”

Raguindin co-emceed the evening program with Lorica. Invoking the national women’s month theme, “We Make Change Work for Women,” Raguindin mentioned that she is being considered for promotion to General, prompting a resounding applause among the audience. Her personal philosophy, she said, was based on a quote from 11-year-old Nkosi Johnson from South Africa: “Do what you can in the time that you have, in the place that you are.” Raguindin’s story is included in the first FWN book. 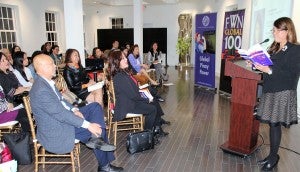 Sonia Aranza reading her story from the book. INQUIRER/Jon Melegrito

In his welcome remarks, Philippine Embassy Minister Jose Victor Chan-Gonzaga made special mention of four Filipino women, all of whom chaired the UN Commission on the Status of Women: Educator and Senator Helena Benitez, Diplomat and Senator Leticia Ramos-Shahani, Educator and Diplomat Rosario Manalo, and Patricia Licuanan, currently chairperson of the Philippine Commission on Higher Education. 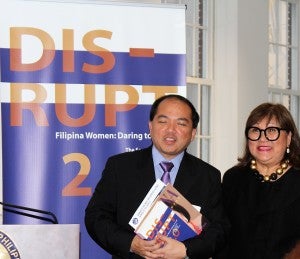 “Tonight, we honor the courage, strength and generosity of Filipino women leaders all over the world,” Gonzaga said. “Filipino women have never shied away from confronting and sometimes, leading change.”

Gender equality and women empowerment, Gonzaga noted, are not just about breaking glass ceilings, but also about fighting injustices such as gender inequality.

“Men, especially those in power and decision-making positions, bear considerable responsibility in attaining gender equality,” he pointed out. “Men and women together are partners in building our communities, growing our livelihood, and creating a shared future.”

Responses from those who attended were highly supportive of FWN’s efforts to highlight Filipino women leaders and their achievements. Michelle Pabico, 30, of Washington, D.C. says she saw herself in their stories, notably the barriers they had to overcome.

“After graduating with an accounting and business degree at 19, I started working in a bank,” she recalls. “But after a couple of years, I was viewed as too young and inexperienced to be promoted manager. But I was confident about my credentials and my potential to move up.” Shortly after her 23rd birthday, she stepped up as bank manager. 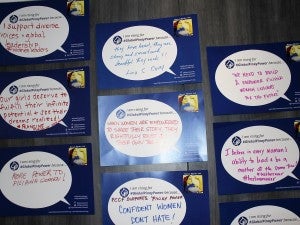 To Angela Jia-Yin Ng, a George Washington University graduate student and a leader of the Philippine Cultural Society, what resonated most with her was Cristeta Comerford’s advice: “’Play the part that you want before you have it.’”

As a young professional, she says, “I find it helpful to be reminded that if you aspire to reach a certain role and pursue something you’re passionate about, you should take the initiative to do what you would do if you had the position.”

She also agrees with Comerford about “bringing others along” and helping them develop to become leaders themselves. “Success is the sweetest when you have empowered others and given them an empowering experience,” Ng adds. 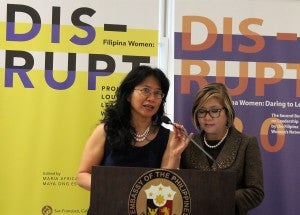 Recently elected President of the Filipino Young Professionals (FYP) of Washington, D.C., Christal Ann Shimanski is glad there’s a network of Filipina Women “who want to build each other up and help their fellow Filipina women succeed.” Being FYP President, she admits, “is an amazing opportunity to utilize and further develop my leadership skills.”

As guests arrived at the second floor of the newly renovated Philippine Chancery Annex Building, they were asked to fill out a poster and write out their responses to “I am rising for #PinayGlobalPower because…” Among the messages posted include: “Pinays Kick Ass!” “They are strong and smart,” “They Rock,” and “We can make anything/everything happen.” The posters were plastered all over the front wall.

“The event tonight reinforced the fact that my heritage is an asset in the workplace,” states Isabella Basco, a Georgetown University graduate student. “Filipinos are making great strides in enforcing gender equality. While we still have ways to go, I have no doubt that Filipinas will continue to advance their careers in all sectors and industries to create a stronger world together.”

Basco, who plans to enter the Miss America Competition, says she’s inspired to see other strong Asian women in powerful positions.  “While being a woman of color in America is not easy, my background and culture have shaped me to be the ambitious, driven person I am.”