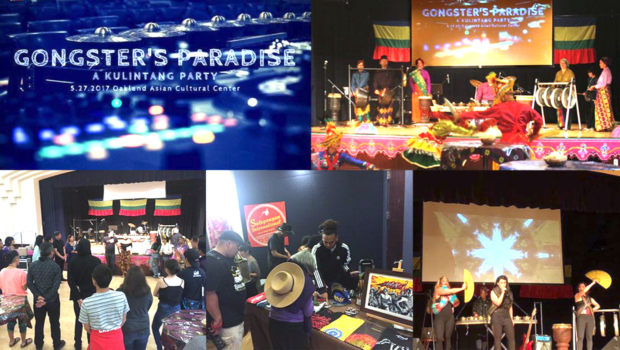 SAN FRANCISCO — This year’s Gongster’s Paradise, a kulintang party celebrating the growing community of kulintang music in North America, will be held at Oakland Asian Cultural Center on May 4, announced Mindanao Lilang Lilang and House of Gongs. Doors will open at 4 p.m.

Gongster’s Paradise: A Stronger Kulintang Force is a 5-hour celebration of kulintang music featuring kulintang artists of different genres presenting the music in many different forms.

Alongside non-stop kulintangan, Gongster’s Paradise will feature visual artists, vendors, and dancers to showcase movements related to kulintang music rooted from all over Mindanao.

A feast will be served throughout the evening to be prepared and served by Chef Eric Pascual, rising star and owner of Eats By E and will be joined by collaborator and sponsor, Ramar Foods.

As part of the as part of the celebrations of Asian American Heritage Month, this kulintang festival will be held at Oakland Asian Cultural Center where the father of Filipino-American Kulintang music, Danongan “Danny” Kalanduyan was once an artist in residence. Soon after Kalanduyan became one with the ancestors, an army

of kulintang players, kulintang teachers and kulintang communities were born, embodying the music into their own repertoire.

The hope of kulintang music remained in the diaspora as the interest in the music grew into a larger community that it is now.

The goal of the event is to celebrate the growing community of showing its capacity from traditional roots to how far artists have been able to take it in a contemporary form. Outreach for the event will be done through social media, PCN (Pilipino College Networks) and community collaborations.

Proceeds of the event will go to Mindanao Lilang Lilang a non-profit organization to help them fund their projects to grow awareness of Kulintang music and pass it on to the next generation.