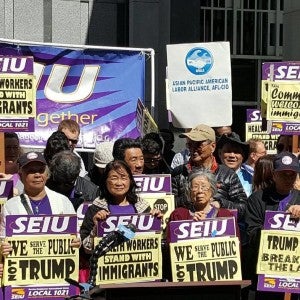 SAN FRANCISCO – Workers represented by the Service Employees International Union have filed an amicus (friend of the court) brief in support of the lawsuit filed by the City and County of San Francisco against President Donald Trump’s executive order to withhold federal funding to cities, counties and states that have declared themselves sanctuaries for immigrants.

The amicus brief tells the stories of front-line workers and the harm that Trump’s Executive Order is doing to the services they provide and the local residents who count on them.

On January 31, the City and County of San Francisco filed a federal lawsuit to block Trump’s Executive Order, saying it violates the U.S. Constitution. Today’s amicus brief, filed in federal court, detailed the impact the Trump order has had on the work provided by public employees in San Francisco and the people they serve.

At the news conference outside the Phillip Burton Federal Building and U.S. Courthouse March 22 the workers said they wanted to protect the essential services all San Francisco residents count on – including health care, home care, public health, transportation, social services and emergency response.

“I’m proud to stand together with other public workers and to stand up for the services people in San Francisco count on. With our legal action, we are calling for a halt to the illegal and destructive Trump Executive Order that hurts our community,” said Sasha Cuttler, RN, a nurse at San Francisco General Hospital and member of SEIU Local 1021.

In the amicus brief, Cuttler shares his first-hand experience and background in infectious disease, cautioning that the fear instilled by Trump’s order may deter people from seeking care. “Public health has no borders and making people afraid to accept care is a recipe for epidemic disease. That’s an inevitable consequence,” Cutler explained

“Trump’s Executive Order retaliates against residents of San Francisco and other jurisdictions nationwide in violation of the U.S. Constitution,” said Roxanne Sanchez, President of SEIU 1021.  “Our amicus brief is a statement to the court and to the public, that we refuse to allow crucial services to be held hostage for the fulfillment of Trump’s divisive and hateful agenda.”