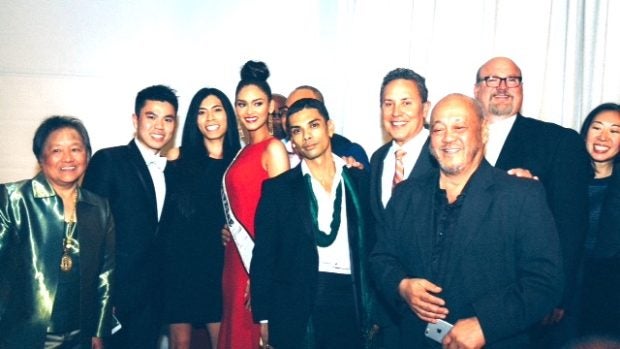 NEW YORK — In July last year the University of the Philippines Medical Alumni Society in America (UPMASA) set up the Dr. Marcelino Custodio Memorial HIV Fund for drug resistance testing kits to be used for HIV patients at the Philippine General Hospital (PGH).

The kits will enable testing for drug resistance to be done on patients at baseline and after failure to respond to conventional therapy. Custodio’s friends, aware of his passion for this advocacy, initiated the project after he died on November 2, 2017.

About a thousand admirers of the physician, HIV-AIDS activist and Renaissance man, filled the Church of St. Francis Xavier in Manhattan on Nov. 11 two years ago to celebrate his life.

Dr. Anita (“Nanette”) Jongco, chair of the fund, said, “What he could not do in his lifetime would hopefully be accomplished through this project that UPMASA has approved with an annual budget of $25,000.” 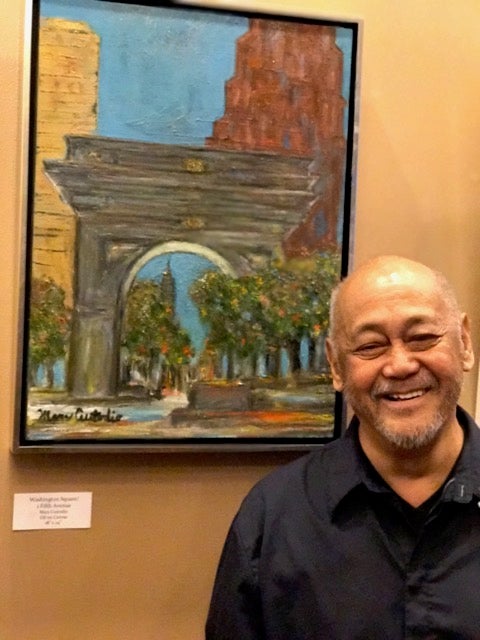 A talented painter, Dr. Custodio was a member of the Society of Philippine American Artists. CONTRIBUTED

She added, “If we are able to get donations exceeding $25,000 by July 2019, we will carry over the amount to next year, and should we continue to reach our goal yearly we could increase the number of patients to be served or the tests to be done based on the recommendation of Dr. Salvana.”

Dr. Edsel Maurice Salvana, director of the Institute of Molecular Biology and Biotechnology at the National Institutes of Science and a faculty member of the Infectious Disease Division of the Department of Medicine of the Philippine General Hospital, is in charge of implementing the project. Salvana’s latest recommendation is to simultaneously fund viral load count and resistance testing, at baseline, after three months and after one year of therapy.

Jongco noted, “Right now viral load count is covered by insurance only after one year and resistance testing is not covered.” She further clarified, “We would allow flexibility in the use of funds with the main goal of improving treatment results.”

This project comes at an opportune time because of the urgent need for aggressive efforts to help stave off the fast-developing AIDS crisis in the Philippines. 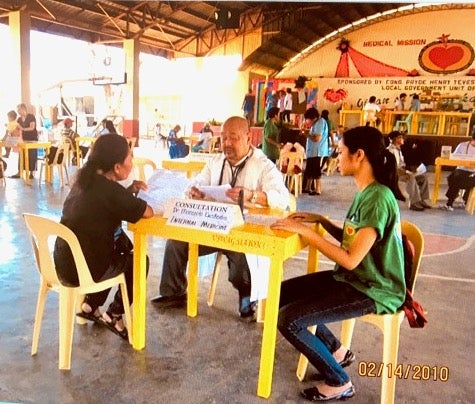 Dr. Custodio at one of UPMASA’s medical missions in the Philippines. CONTRIBUTED

“The Philippines has the fastest-growing HIV epidemic in the world,” Salvana stated in his May 16, 2018 article entitled “World unprepared for a new HIV epidemic” in SciDev.Net, a leading source of news, views and analyses on science and technology for global development. According to the World Health Organization and World AIDS Programme, the new HIV cases have decreased from 2.1 million in 2015 to 1.8 in 2016. In the same article, Salvana cautions, “the virus is by no means defeated and continues to evolve.” He also sounded the alarm that the world could be facing a fast-evolving drug-resistant HIV strain that would likely start in the poorest countries.

At another memorial service for Custodio on Nov. 29, 2017 at the Philippine Consulate in New York, Therese Rodriguez, CEO of Apicha Community Health Center (ACHC), related how she met the doctor. “When I was first introduced to Mars, he said, ‘You and your colleagues do good work at Apicha. I want to help.’” ACHC was formerly the Asian and Pacific Islander Coalition on HIV-AIDS.

Thus began Custodio’s community service as an AIDS activist and volunteer on the Apicha Board of Directors, which lasted from 2005 to 2016. He served as chair of the board for six years, supporting the organization through the worst of times, the economic recession of 2008, to the best of times, when Apicha became a fully qualified community health center that provides quality health care to the poor in medically underserved areas, as well as maintains its longtime commitment to people living with HIV/AIDS, Asian and Pacific Islanders, and the LGBT community.

Rodriguez stated, “Mars was a clinician, knew the dynamics of diseases with no cure, and wanted to be part of the movement. He was eager to understand as much as he could about HIV and use his knowledge, connections and advocacy to change policy both in the U.S. and in the Philippines.” 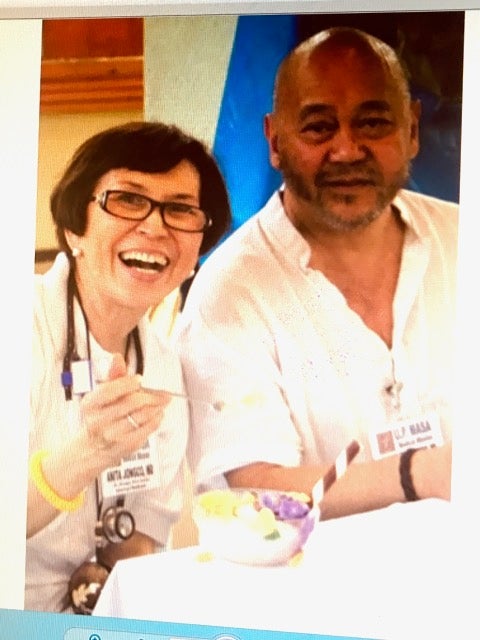 Reuters reported on Aug. 1, 2017 that the Philippine Health Department and the United Nations have recorded a 140 percent increase in the number of new infections in the Philippines with 10,500 Filipinos living with HIV at the end of 2016, compared to 4,300 in 2010.

In the same report, epidemiologist Genesis Samonte of the department’s public health surveillance body noted that, “Any male who has sex with another male for any reason, is at risk.”  She clarified that she was not referring only to those that are openly gay. “Two out of three new HIV infections were among 15- to 24-year-old men, who had insufficient awareness of HIV, its symptoms and treatment.”

Dr. Rossana Ditangco, the head of the AIDS Research Group of the health department’s Research Institute for Tropical Medicine (RITM), has called the HIV epidemic in the Philippines a “national emergency,” according to Carlos Conde, Researcher at the Asia Division of Human Rights Watch, in his Aug. 1, 2017 article in the HRW website. Ditangco also stated that the spiraling health crisis signals that with the government’s current strategy, “we can’t control the rapid rise of HIV infections.”

For a country whose population is over 100 million, the number is still low but the dramatic spike in HIV cases is causing both international and Philippine health authorities and non-governmental organizations to express grave concern. It has been reported that about 32 people are getting diagnosed daily, and if this epidemic is not contained, there could be as many as 250,000 Filipinos infected with HIV by 2030.

Some of the reasons cited by AIDS activists for the rapid growth in HIV-AIDS cases in the Philippines are lack of knowledge about the disease, including how the virus is transmitted and methods of prevention, lack of awareness about the importance of testing, the continuing stigma and discrimination about disease, and the taboo on sexuality.  Many have expressed frustration that a number of Filipinos still engage in unsafe sexual behavior, such as shunning the use of condom, which has been scientifically proven as an effective preventive measure against the spread of the disease.

Conde, in his Aug. 1, 2017 article, outlined some of the HRW recommendations to address the spread of the epidemic, such as: “removing official obstacles to condom access and usage as well as ensure that schools include safer sex and HIV prevention education in the curriculum; reactivating harm reduction programs targeting drug use, particularly in Cebu City; and stepping up efforts to eliminate stigma, which are key factors in discouraging or preventing key affected populations being tested or treated.”

In a welcome legislative victory for HIV-AIDS advocates, President Rodrigo Duterte signed early this year the HIV AIDS Policy Act of 2018, which was authored and co-sponsored by Senator Risa Hontiveros. Previously, Duterte had received widespread criticism for making a statement against the use of condoms.

Hontiveros said that the bill, which amends the 1998 law, “is an important victory in our fight to reverse the tide of the HIV-AIDS epidemic in the country. We now have a stronger and modern policy tool to appropriately respond to this problem.” Moreover, “The bill incorporated a concerted response that makes use of the most recent developments in prevention and treatment in medical and health science.” The lawmaker also pointed out that the legislation was drafted with the input of communities that are in the forefront of the fight against AIDS.

Addressing the crucial demographics that are now being hit hard by the disease, Hontiveros stated, “The youth will benefit greatly from the bill’s passage into law. HIV education in academic institutions and workplaces will be implemented as part of the law. Voluntary HIV testing and delivery of non-discriminatory HIV-AIDS medical services shall be the policy of the state.”

Rodriguez welcomed the revision of the Philippine law, which represents a more pro-active approach to testing, treatment and protection for people living with HIV. The Apicha CEO, who has been doing HIV-AIDS work for more than two decades, also advocates for PrEP, the pre-exposure prophylaxis for sexually active individuals who are not infected with the virus, which was introduced in 2012. She stated, “In addition to the use of condoms and other safe sex practices, PrEP is a powerful tool in preventing HIV infection.”

The late Dr. Custodio was cognizant of the many social, cultural and economic barriers that contributed to the rise of HIV cases in his homeland, leading him to become a committed HIV-AIDS activist during his lifetime. Having served as Chief of Oncology at Christ Hospital and Irvington General Hospital in New Jersey for many years, he had great empathy for patients suffering from illnesses with no known treatment. His widow Cora Custodio said, “He was also touched about how the HIV epidemic had affected Filipino overseas workers, the poor and the young in the Philippines.”

She related that on one of their homecoming trips, her husband visited the Research Institute for Tropical Medicine in Alabang, Metro Manila, partially funded by the Japanese government. He met with the staff at RITM’s HIV-AIDS program and would later pay visits to the patients to lift their spirits. He also got involved in Project Red Ribbon, a support group for people living with HIV-AIDS.

Taking early retirement in 2002 from his oncology practice did not slow Dr. Custodio down. To escape the harsh New York winters, he and his wife would spend three months in the Philippines every year. Custodio recalled, “He kept his medical license current so he could spend the first month of our vacation to provide free consultations at the dining table at our home. Over the years, he also joined UPMASA in about a dozen medical missions as a volunteer to underserved areas in the Philippines, paying for his own board and lodging, as well as bringing free medicines for his patients.” 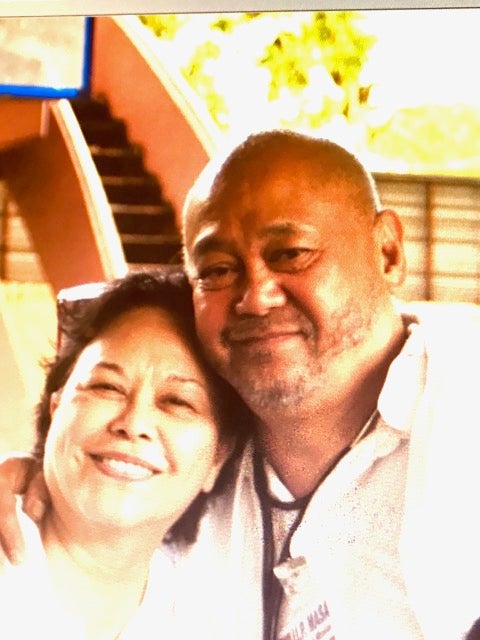 With his wife of over five decades, Cora Yabut Custodio. CONTRIBUTED

A true Renaissance man, Dr. Custodio extended his community service in New York through his passion for the arts. He served as chair of the board of directors of the Ma-Yi Theatre Company, an organization aimed at producing new plays by Asian American writers, and became one of its most avid supporters. A talented self-taught painter, he joined the Society of Philippine American Artists. In the wake of the devastating super typhoon Haiyan/Yolanda, which hit the country in late 2013, the group organized an exhibit to raise funds for the victims of this massive disaster.

This dedicated activist was foremost a devoted family man. He was married for fifty years to Cora Custodio, nee Yabut, whom he met while they were both students at the University of the Philippines. He is also survived by his three children, Christian (Andrea), Victoria (Randy), and Paolo (Yvanna) and his grandchildren Carson, Robbie, Olivia, and Jonas.

In her tribute at the Nov. 11 memorial, Dr. Jongco, the Custodio family’s close friend of over five decades, said, “Today, I say goodbye to a giant of a man with the heart of a doctor, the soul of an artist and the warmth of so many suns.”