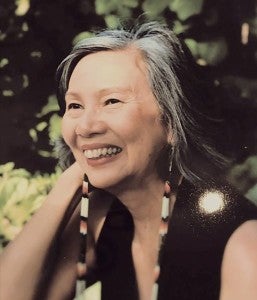 She is a professor, an eminent scholar, author, activist, a babaylan-inspired woman and a lot more. But she also calls herself a “settler” and a “colonized person,” and she has embarked on a long and arduous journey to unlearn 500 years of colonial influence, which had shaped her consciousness and identity.

This is the process of “decolonization,” a word that did not circulate very much in the Filipino community in the United States in the early ‘90s.

“When I was decolonizing, I became aware of the insidious and unconscious messages I was internalizing–our ‘inferiority,’ our brownness, our need to be ‘improved and corrected’; our need to be whitened. For a while, I even bought whitening products for my face,” she says.

The journey of Dr. Elenita Fe (Leny) Luna Mendoza-Strobel, professor at the American Multicultural Studies Department of Sonoma State University and Project Director of the Center for Babaylan Studies, is far from over.

Growing up in Pampanga where Clark US Airbase was, Strobel was exposed to “whiteness” among the Filipinos and in her family. They listened to American songs, watched American movies, and everything “white” and “good” was American.

She explains that Bacolor, Pampanga, was the capital of the Spanish colonial government. Its lush environment attracted not only Spanish officials, but also members of the Spanish nobility and the monarchs of Southeast Asia, making it their favorite vacation spot. Kapampangans cooked various foods for these guests, and that made them become well known as cooks.

Strobel’s maternal grandfather was the son of Joaquin Luna, the brother of Antonio and Juan, making her the great-great grandniece of the famous Luna brothers. However, she knows little about her paternal side. 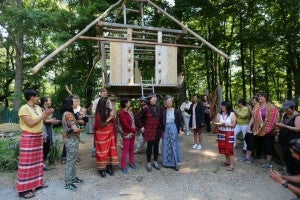 At the 2015 CFBS Symposium on Filipino Indigenous Spirituality and Christianity, in Ohio. Here with CFBS Core Group and the Ifugao Hut being built by Ifugao Mombani Mamerto Tindongan. Project seeded by CFBS. MAILEEN HAMTO

“Lucila Salonga (Apu Sinang), my paternal grandmother is my ‘magical grandmother.’ Widowed early, she raised seven children all by herself. She put the lighted end of the cigarette in her mouth. What is more magical than that?” she laughs.

To remember Apu Sinang, Strobel planted a honeysuckle vine that reminds her of the sampaguita, which she and her Apu stringed together into garlands. The honeysuckle creeps onto the deck of the second floor of her home. The vine is now 30 years old.

In 1983 she married a white engineer from Montana and immigrated to the United States. Like all immigrants, Strobel was not spared the feeling of alienation in a new country. She sought therapists, hoping this could help her.

“The therapist did not know anything about me and my background. I had to tell her about the Spanish and American colonization. It was a one way process and it did not work for me.”

Strobel decided to start graduate school to replace her expensive therapy sessions. She took two PhD courses at University of California in Berkeley while doing her master’s program in Interdisciplinary Studies at Sonoma State University before proceeding to her doctoral studies. There she met Dr. Virgilio Enriquez, the father of Sikolohiyang Pilipino, and a Filipino visiting professor at UC Berkeley.

Attending sessions with Dr. Enriquez as he explained the Filipino core values like “loob,” pakikipagkapwa, pakikiramdam,” Strobel realized that it was the narrative she was looking for. It helped her in developing her ideas about the cultural identity of Filipino Americans who came to the United States after 1965.

But her interest in decolonization and cross-cultural studies were discouraged even by some Filipino scholars. Thus, Strobel realized that the psyche of Filipinos even in the academe was already replete “white love” and oblivious to the “epistemic and psychic violence of colonization.”

In 1996 her dissertation at the University of San Francisco international and multicultural education course entitled “The Process of Decolonization for Post-1965 Filipino Americans” became the Most Outstanding Doctoral Student Dissertation. In 2001 Giraffe published it under the title: Coming Full Circle: The Process of Decolonization Among Post-1965 Filipino Americans. The book is still in print and Strobel is still receiving emails from readers who are appreciative of her work.

Decolonization helped Strobel to reconnect with her Kapampangan roots. A large part of it was reclaiming the babaylan spirit. She explains that babaylan is a Visayan term which means healer, mediator between spiritual realms, counselor and therapist. The babaylan is one of the four pillars of the indigenous community, with datu, panday/smith, bayani/warrior. 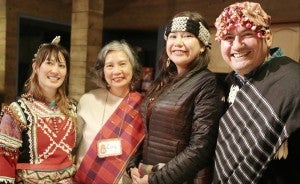 In the Philippines, indigenous communities still practice shamanism and continue the role of the babaylan. This person is called mumbaki, bailan, catalonan, dawak, etc.

“We never say we are babaylan because a babaylan needs to be a part of a community that affirms and confirms that role for you. In diaspora, we have lost a lot of our indigenous practices,” Strobel explains.

In 2009 along with other Filipinas, Strobel founded the Center for Babaylan Studies (CFBS), which focuses on Filipino Indigenous Knowledge Systems and Practices (IKSP) including Sikolohiyang Pilipino and is meant to be a place of learning, knowing and embracing the sacred outside of the confines of the ivory tower.

The center holds workshops, retreats, concerts and forums exploring Filipino indigenous cultures and practices and their relevance to Filipinos in the diaspora. CFBS has also began to connect with other indigenous groups in North America.

“Reconnecting with our Indigenous Soul means that we come to understand that our fear of uncertainty and anxiety comes from our separation from Creation (Land, Animals, Trees, all non-human creation) and our own displacement from our places of origin. Our sense of disconnection and separation is the evidence of how disconnected we are from our sense of Kapwa. This sense of Kapwa is called InterBeing, Intersubjectivity in English. So many of us are devout Catholics or Christians, but our relationship with God should not only be transcendent but also immanent; that means that we recognize the sacredness of all of creation. All is Sacred,” Dr. Leny Strobel says.