Expedited removal may be expanded under Trump

Expedited removal may be expanded under Trump 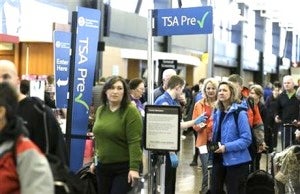 Filipino travelers are familiar with “Airport to Airport” or “A to A,” expedited removals, referring to cases where a passenger at the port of entry in the United States is found inadmissible and is returned the same day of arrival (or the next available flight) to the country of origin. ASSOCIATED PRESS

Several advocates are distributing “Know Your Rights” literature to those who may possibly be affected by the enhanced enforcement of immigration law brought by Trump’s Executive Orders. One of the rights that one should know is the right to a hearing before an immigration judge. This is a constitutional due process right that may be asserted during apprehension and prior to removal.

There is one particular instance where there is no right to hearing, and that is during an expedited removal. Given the changes brought about by Trump’s Executive Order, will an extension of this process affect those who are present in the United States in unlawful status?

For 20 years now, the expedited removal has been a process used by the Department of Homeland Security to fast track the removal of certain individuals at the ports of entry, who are in violation of immigration law relating to fraud or are unable to show proper legal documents to prove lawful status.

It is commonly referred to by Filipino travelers as “Airport to Airport” or “A to A,” referring to a case where a passenger at the port of entry in the United States is found inadmissible and is returned the same day of arrival (or the next available flight) to the country of origin. In these cases, the arriving alien is not entitled to a hearing, and a determination of a federal agent is sufficient to send the traveler back to his home country.

In 2004, the DHS expanded the application of expedited removal to noncitizens who are encountered within 100 miles of the border, and who entered the United States without inspection less than 14 days before they are encountered by immigration authorities.

Due process right to a hearing

Applying expedited removal to the fullest extent of the law means putting millions of unauthorized immigrants who have been in the United States for less than 2 years at risk of an expedited removal without a hearing even if apprehended beyond 100 miles from the border.

The DHS rules are still being developed and they will soon be published in the Federal Register. Yet, overzealous immigration officers may put anyone in expedited removal if apprehended and if unable to prove legal status and 2 years of physical presence.

The right to a hearing of those who have been residing in the United States extends even those who are without legal status. The Supreme Court had settled this issue many years ago. Should there be a deprivation of the right to a hearing because of the proposed expanded expedited removal, the Executive Order entitled “Border Security and Immigration Enforcement Improvements,” will be challenged in the judicial courts as being unconstitutional just like the executive order on the travel ban.