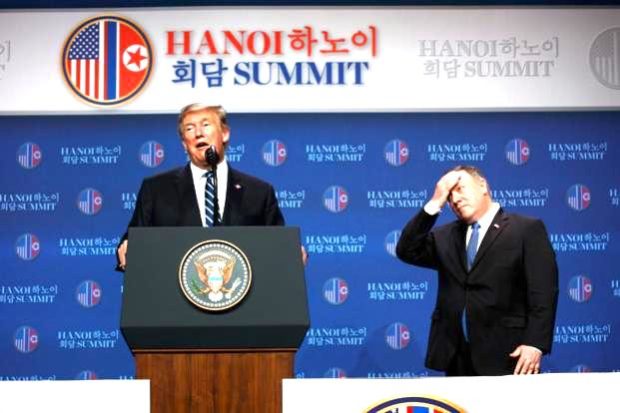 Rodrigo Duterte has nothing to worry about. After the Kim-Trump 2 Summit in Vietnam, President Trump has exposed himself.

Trump doesn’t deserve to be POTUS. The presumed “Leader of the Free World” or LOTFW, is actually acting a lot more like a WCL. “World-class loser.”

Or as his former personal attorney and fixer Michael Cohen said under oath, “He is a racist. He is a con man. And he is a cheat.”

As for the “world class” bit, Trump earns that because he took his unprepared self to a “summit” across the globe to North Korea, giving up the only thing he has—his status as said leader of the free world. Mind you, after this week, it’s a diminishing status, but he is still the president.

And as Americans, it would be unpatriotic for us to not root for the guy. But Wednesday in America, Thursday in Asia, was not good for the Donald.

He’s flying back to Washington without a deal. And flying against time, he’ll gain back some. But he can’t re-live the day. The damage is done.

Leaving North Korea empty-handed will go down as one of the president’s biggest missteps—although there are too many to count, along with all the thousands of lies in just the first two years. For this trip, the big American went to Vietnam with that “leader of the free world” status, and essentially gave Kim Jong Un credibility, which eluded him in the past because the “good guy” nations had isolated him as a brutal dictator of the highest degree. Kim’s only way to respectability has been burgeoning nuclear capability.

But Trump doesn’t understand. He sees Kim and only sees markets to sell to. A place for a hotel, some Trump brands, a place to make money. This is why a businessman is a lousy politician/world leader. The subtlety of nuclear diplomacy? Trump only sees dollar signs.

And like a rookie pol, our apprentice president has taken the nuclear bait. Not once. But twice. The first time provided a photo op with a look to the future. The second time this week can be called just one thing—a complete an utter failure.

We already had a sense that it was not going to go well. Trump and Sec. of State Mike Pompeo hardly seemed on the same page. In fact, reports said the preparation for the summit was lacking if one were to anticipate a big victory—North Korea’s agreement to a verifiable denuclearization.

Prior to the trip, Trump seemed to put a lot of weight on his “love” for Kim, and the letters Kim wrote to him. Does the MAGA president sound like an international patsy yet?

From Trump’s grand pronouncement of love, I suggested the only worthy photo-op of Kim/Trump2  would be the two, side by side, Gaga/Cooper style singing, “Shallow.” Karaoke night, right?

Trump would have left with something then. A narcissistic selfie. But instead, as most of the U.S. was asleep, the president announced there would be no deal. North Korea wanted all sanctions lifted, and the U.S. wanted more denuclearization.

The dream of a Nobel Peace Prize kind of agreement was not happening, not like an episode of “The Apprentice.”

But the winner? Undoubtedly Kim. He doesn’t want to de-nuclearize. He only wants the courtship and the look of being with the “Leader of The Free World.”  Kim got that. And keeps his nukes and his dictatorial control.

At the hastily called press conference to announce the collapse of the talks, Trump tried to spin it. You have to walk away from a deal sometimes, right?  But he would rather walk away from the press on this occasion. He answered just one question on Cohen’s testimony in DC, and of course, clung to Cohen’s statement that he couldn’t show collusion.

But Cohen did implicate Trump in at least four crimes that even Fox News said were potential felonies. They include lying about knowledge of a Wikileaks dump of Hillary Clinton’s emails. That would show the president lied under oath in his written answers to Special counsel Robert Mueller. Cohen also said Trump knew of that infamous Trump Tower meeting with the Trump campaign and the Russians, another item Trump had previously denied under oath. And then there’s the matter of the $35,000 check written to Cohen that Trump signed while in office. The hush payment landed Cohen in jail. It may be a campaign violation for Trump.

All bad. Impeachable? Possibly. But Kim watches the news. He knows he’s dealing with a compromised Trump.

Trump didn’t call on many U.S. media at the conference, but did let my friend David Nakamura of the Washington Post ask a question, though Trump probably thought Nakamura was just another “Asian media” guy.

Nakamura asked Trump about the oft-forgotten Otto Warmbier, the American student who was jailed and brutalized in a North Korea prison for more than a year before he was released to the U.S. near death. He later died and his family has sued. But there’s been no strong reaction from Trump. Just like Kashoggi’s death. Just like Putin’s election tampering. So did dd Kim say anything about Warmbier? Did he know about the case?

And then Trump showed his inelegance.

That’s the LOTFW. A shameful defender of Kim, the dictator and human rights violator. Do we really take him at his word?

Duterte. That’s your cue. You can continue to get away with murder. And martial law? Trump has giving a green light to all autocrats and dictators. Kim played Trump. So have the Saudis. And Putin.

But all good Americans know this can’t stand. There’s a window to 2020.

Filipino Americans who love Trump need to review the events of this week. It’s not too late to jump ship. There’s no defense for Trump. He has exposed himself as an embarrassment to all freedom loving people who believe in democracy.

Emil Guillermo is a journalist and commentator. He writes a column for the Inquirer.net’s North American Bureau. Twitter @emilamok

Find him on Apple Podcasts.