RC Caylan, Iligan City-born and now a rising star from Grand Rapids, Michigan was hand-picked for the NYFW by no less than the Council of Aspiring American Fashion Designers Association (CAAFD) after hurdling a rigorous selection process.

A charitable organization founded by key pioneers in the fashion industry, CAAFD backs designers who aspire to make it in the United States. As in previous years, the association unveils a group of distinctive emerging brands from around the globe with their best designs for the showcase series.

According to Caylan, four designers were chosen from as many as 200 applicants from around the world for the Fall/Winter runway presentation that happened last February 12th at the Industria Studio in Manhattan.

“I feel deeply honored to be chosen,” Caylan told INQUIRER.net. “Not everyone is given this wonderful opportunity.” As RC himself said, where he is now is a “fruition of my whirlwind journey”.

Caylan, who immigrated to the USA in 2012, graduated from Fashion Merchandising (major in Fashion Design) and went for his final internship with Puey Quinones, a fellow Filipino designer based in Los Angeles, where he met some of the nicest people in the fashion world.

“The first runway show I did was “Red Ruby” in 2015 in the San Francisco Bay Area Fashion Network ran by Fil-Am designer Joseph Domingo. Then, I opened my own atelier a year later in Grand Rapids.”

For his NYFW debut, he showcased 15 looks that he aptly named “Legend, I Am Every Woman,” inspired by his icon, the late Whitney Houston. 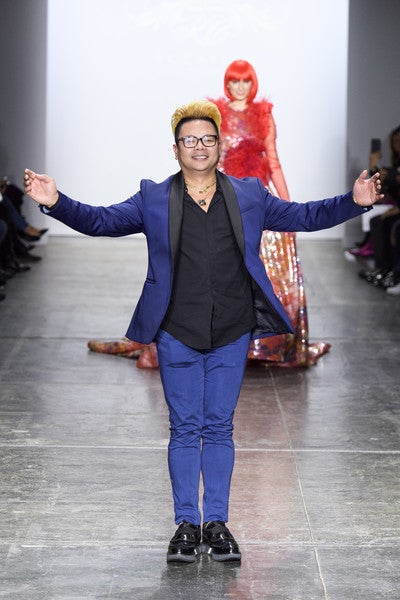 “When I heard in the news that a biopic of Whitney was going to be made, I thought she’d be a great inspiration for my new collection since she was one of my favorite artists of all time. I grew up listening to her music, singing them even. So the entire collection was inspired from her look when she started in show business, from the late ‘70s to the early ‘90s.” And the result was magical.

The Fil-Am designer was inspired by the female physique and glamour, and worked to put more emphasis on women’s fashion and form. His work has been recognized by the British edition of Vogue magazine in its designer profile segment. His designs have also been worn by various Hollywood celebrities. 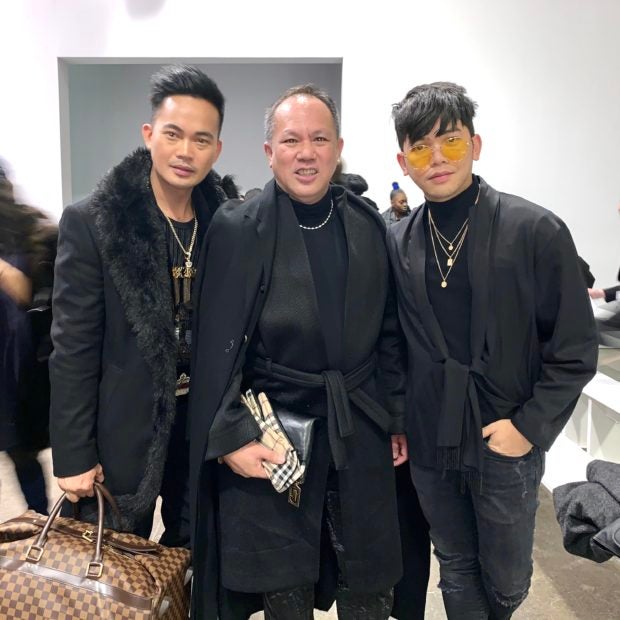 Ramp model turned fashion house director Limuel Hayag Vilela, CEO at Spotlight Couronne Internationale in Canada, was applauding Caylan from his seat and said he couldn’t be prouder of his friend who made an effort to present his designs to really highlight women.

“What a great reflection that in a world of fashion trends, RC’s collection has a story and purpose. Every woman is beautiful, is empowered, and is an inspiration in our community.”

Patron of arts and fashion influencer Bong Prada Lim, who flew in from Manila to watch Caylan’s NYFW preview, was impressed. “This is arguably RC’s strongest collection to date,” he said. “RC featured the cocktail and evening wear he became known for–elegant and sophisticated choices for the red carpet.

“Sparkling colors play with bright richly hued tones that hint his inspiration from pop diva Whitney Houston. But the glitzy and sequins [actually] remind me more of Joan Collins of the ‘80s TV show Dynasty. Whatever inspiration RC has, I am pretty sure he has arrived at the red carpet. He is a global FIlipino we can all be proud of.” 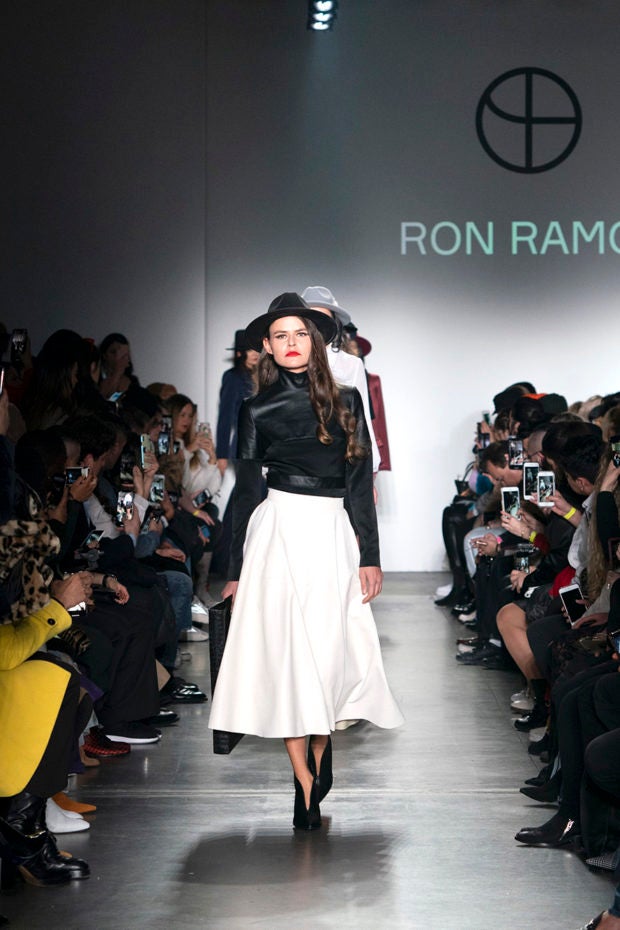 Ramos got invited to feature his dresses after “they found me on social media.” He moved back to NYC after working in Europe for some time.

With his participation at the NYFW through OFS and previous designs for celebrities like Nikki Minaj, Beyonce and Lady Gaga, he hopes these would distinguish him from his previous work and finally create a brand of his own.

Born in the Philippines but raised in New York, Ramos began dreaming of becoming a designer when he entered middle school. “[I became interested in pursuing fashion design] after seeing my mom make costumes for the local theater. I was always with her sewing and that’s been embedded in me ever since I was young,” he told INQUIRER.net.

Like Caylan, Ramos’ inspiration for his debut collection is about empowering and strengthening women.

“I’m all for feminism. I want to do everything I could to bridge the difference between the sexes and I definitely want equality not just for men and women but for everybody.”

Ramos showed 10 looks that “connected his aesthetic of luxury and tailoring by playing with the idea of softness and hardness.”

His collection, which he conceptualized from scratch, “used an opposition of heavy and light textiles from leather to georgette to crepe to back satin, resulting in a sultry-luxe workwear that transitions from day to night”.

“I do my own patterns, I do my own sewing, I’m not just a designer. I don’t just draw, sketch or conceptualize. Everything I’ve done, I’ve done from the concept to the design to the construction and execution of the final fitting.”

For this NYFW19 collection, Ramos’ pieces “are interchangeable, additive, and layered amongst the collection itself or from within your existing closet. The ideologies of this collection genuinely convey the designer’s principle of dressing; embodying effortless luxury and strength”. 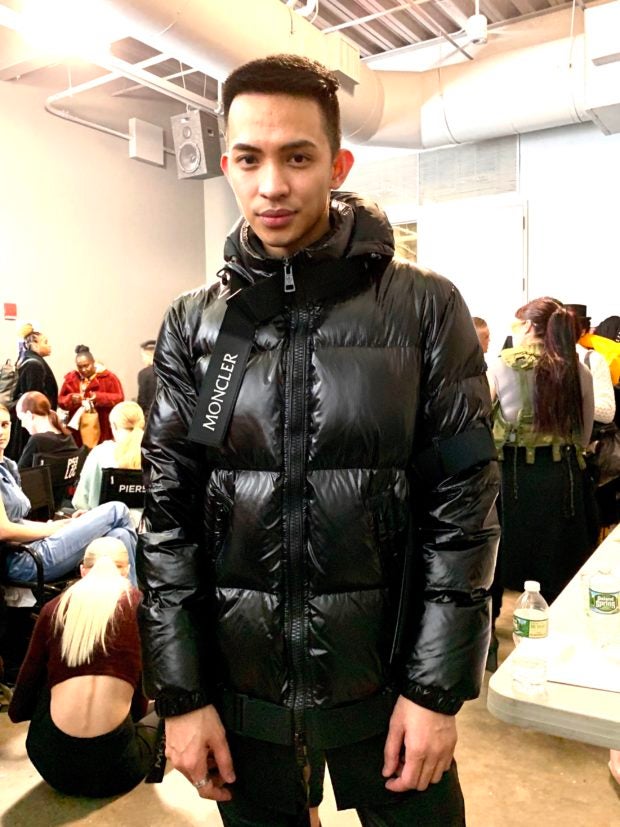 When asked if he looks up to big-name established designers, Ron says that “I don’t really look up to influencers. I do get influenced by daily people. The people I meet walking in NYC, my hometown, friends, new friends that I meet–it’s definitely influencing  to meet new people, not just to meet celebrities but regular people with a story.”

For 2019, Ron has some fashion predictions. “I see a lot of tailoring, a lot of sharp lines, really really nice crisp shirts, lots of workwear this season. I think there are a lot of trends that are being brought back from the different decades; the 50s, the 80s and it really depends on your take in fashion. We’re creating something new which I think is exciting in fashion. But everybody is giving it a modern twist.”

Filipino Americans have noticeably made their mark in this year’s Academy Awards with no less than three Filipino nominees in the cinematography and animated short film categories. Fashion designers RC Caylan and Ron Ramos can’t be far behind.

MORE STORIES
Satirical play by Fil-Am on beauty, aging, cosmetic surgery, social media, selfies
Filipina nurses say why they back Sanders and ‘Medicare for All’
Dem leaders spreading Berniephobia virus
Don't miss out on the latest news and information.