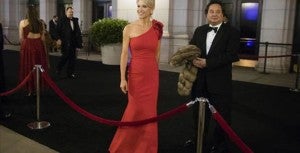 George Conway, husband of Trump adviser Kellyanne Conway is being appointed to defend the White House against lawsuits. ASSOCIATED PRESS

Conway is a partner at the New York law firm of Wachtell, Lipton, Rosen & Katz. The law firm’s website says Conway has extensive experience in litigation involving securities, mergers and acquisitions, contracts and antitrust cases. He graduated from Harvard and then Yale Law School. He joined the law firm in 1988, soon after his graduation from law school.

He has been involved in numerous complex, high-profile cases with that law firm, where he has been a partner since 1994. In the 1990s, Conway wrote the Supreme Court brief that cleared the way for Paula Jones’ civil suit against President Bill Clinton. Clinton’s denial of an affair with White House intern Monica Lewinsky during a deposition in the Jones case led to his impeachment trial.

The White House and the Justice Department would not confirm the pick Saturday. George Conway declined to comment.

Kellyanne Conway is a longtime Republican pollster who helped turn around Trump’s presidential campaign at a critical time last summer. She joined the campaign as a senior adviser and quickly earned the candidate’s trust. She’s also close with daughter Ivanka Trump and her husband, Jared Kushner, another influential voice in Trump’s inner circle.

Kellyanne Conway stepped in to manage Trump’s bid against Democrat Hillary Clinton when the campaign began flailing in the face of a series of controversies. Many credit her with boosting him toward his Election Day victory after she urged him to more closely follow the teleprompter in his speeches and helped him deliver clearer talking points that minimized controversy in the final days of the campaign.