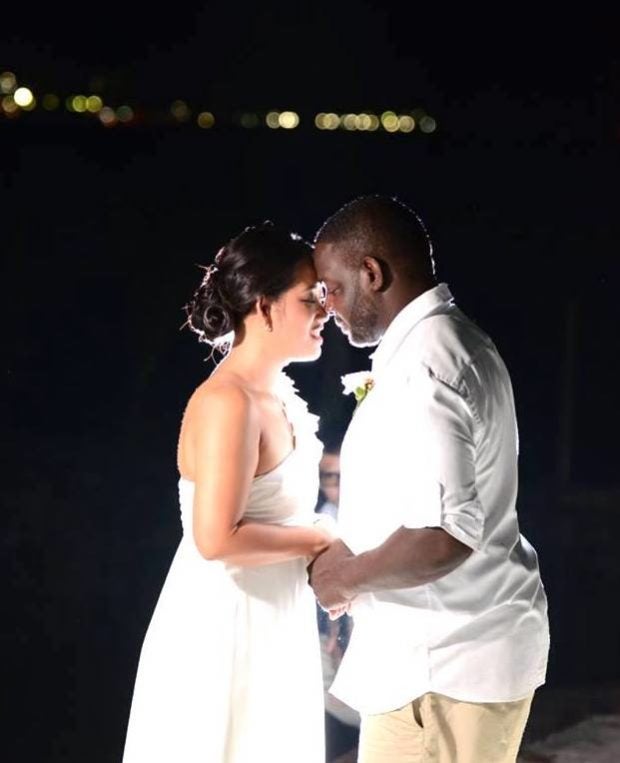 Ervie Rivera and Robert Flowers on their wedding day on December 18, 2015, in Davao, Philippines. CONTRIBUTED

For single men and women, especially overseas Filipino workers, the month of February seems to be the time to look for love. In this regard, dating apps are popular among people who do not have time to socialize because of their jobs, or want to search for would-be friends beyond their immediate circle.

In February 2014, a friend prodded Ervie Rivera, an OFW in Singapore, to try a dating app called Charm. Anyway, Valentine’s Day would be more fun with a date.  Meanwhile in Camden, New Jersey, Robert Flowers, also logged on, searching for people to “talk to in general.”

Among thousands of people searching, Ervie and Robert found each other, and the rest is a love that blooms each day.

From online to long-distance love affair

Robert recalls that when he started talking to Ervie, he did not want to talk to anyone else. So, they decided to move to other online platforms to communicate better.

“When I first saw her I was thinking, wow, she has Angelina Jolie’s lips. It is very uncommon for an Asian. We did video chat instead of sending photos,” Robert says.

Robert also admitted that he never expected Ervie to be interested in him because of his race, and background coming from Camden, New Jersey, which was the poorest city in the U.S. in 2012 and still remains poor.

At first, Ervie was skeptical about romance because of the stereotypical gangster image of African Americans portrayed in the media. She knew that Filipinos were more accustomed to “white Americans” and not the African Americans.

Robert’s friends and family also doubted that the relationship would work.

“They thought I was a fool for having a relationship online. Both my friends and family thought it won’t work given no physical presence or sexual contact. You know the American culture about being in a relationship-sex,” Robert says.

Ervie admits that she fell in love with Robert because he is funny. But what caught her attention was his surname, Flowers. She would have “flowers” every day, she smiled at the thought.

From an online love affair, the two decided to meet in person.

‘How deep is your love’

While Ervie was on vacation in Davao, Philippines, Robert visited to meet her family and formally ask permission to marry her.

“When I first saw her in person, I can’t explain it as to how I knew she was the one. I just felt that I got to be with her for the rest of my life. I just trusted her instantly for some reason,” Robert enthuses.

On Robert’s second visit, it was to marry Ervie. They were married on Dec. 18, 2015 in Davao with Ervie’s family and friends in attendance.  Robert’s family was not able to travel to the Philippines.

Ervie’s family and friends and Robert’s associates still had concerns.

“They thought it was cool! But some associates wondered why should I come out to find a wife out of my race. Some like the idea that I am not going with black women but also think that I was just taking advantage of her wanting to come to America. It was really different kind of reactions,” he explains. The wedding was just another phase of their long-distance relationship. It took more than a year before Ervie and Robert could be back in each other arms.

On Feb. 24, 2017, Ervie finally arrived in New Jersey. If long-distance absence makes the heart grow fonder, living together makes hearts grow closer, the couple found out. Coming from different backgrounds and ethnicities, Ervie and Robert experienced many “firsts” in their life together.

“Robert tried durian despite the smell. He was so amused about the way we do things. For example, using our lips to point out something or calling people with it,” Ervie laughs.

“Getting used to new things, communication blocks, our language clashed — like Americans speak broken English. ‘A while’ is a long time here, but for her it’s just a minute or so. Cultural differences, mostly,” Robert explains.

Often cultural differences can result in discrimination by other people.

Ervie recalls being told that she had a very thick accent, that the person she was talking to couldn’t understand her. She works as a general manager at a Chipotle Mexican Grill. Some people are also surprised that she is the manager.

“Usually they think that just because you’re Asian all you can do is cleaning,” Ervie says.

Robert also shares an instance when Ervie was trying to assist a man with his kids but instead of being grateful the man yelled at her.

“My wife is very nonchalant and optimistic it was hard for her to think that discrimination really existed here. She witnessed it herself. It was hard not to get mad at other people. Now that she’s been here for a while she knows about discrimination, especially against African Americans.”

Although their relationship has not always been a bed of roses or “flowers,” despite the challenges, Ervie and Robert agree that putting God at the center of their marriage keeps them together.

To make marriage work regardless of the race or nationality of the partner, Ervie advises:

“There would be challenges ahead. You didn’t grow up with the same environment so continue to learn and love each other. Remember not to sweat the small stuff, pick your battles wisely. Because not every battle is meant to be won.”

To men who are contemplating interracial marriage, Robert says:

“Be more understanding. When you are married to a person of a different race you have different cultures that you need to adapt to, and communication is probably not the greatest, so patience is very important.”