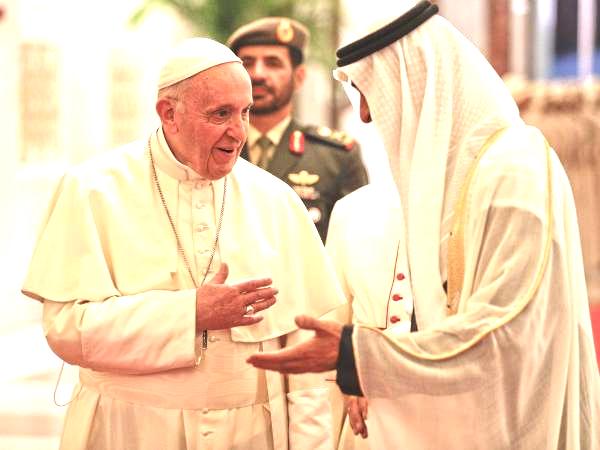 The Vicar of Christ is a phenomenon, a bona fide international ecumenist bringing about interfaith meetings and engaging in interracial dialogues wherever he goes.

In the 1200s when the world was thinking of armed struggle as the only way, when Christian Crusaders’ focused goal was to recover the Holy Land through waging wars, Saint Francis was thinking of and pursuing peace.

In 1219, the poverello of Assisi traveled from Italy to the Holy Land, and from there he went straight to Damietta, Egypt, boldly crossing battle lines to talk peace and love with a ferocious sultan, Malek al-Kamil.

The Saint’s prayer: “Lord, make me a channel of Your peace. Where there is hatred let me bring love, where there is injury, Your pardon…”

Plurality of religions and interfaith dialogue

Sterling! The Supreme Pontiff, the namesake of Saint Francis of Assisi, signed a joint statement with Ahmed el-Tayeb, Grand Imam of al-Azhar, during an interreligious meeting in Abu Dhabi on February 4, 2019. The joint statement on “Human Fraternity for World Peace and Living Together” urges all men and women of goodwill to do and accomplish things beautiful.

Jesus once prayed to His Heavenly Father: “That they may all be one” (John 17:21). Ut unum sint then became a papal encyclical for pastoral guidance that aimed for universal brotherhood, written by Pope John Paul II in 1995.

‘Outside the Church there is no salvation’

This brainwave of exclusivity began in the 3rd century with Saint Cyprian of Carthage, who theologized: Quia salus extra ecclesiam non est. The saint thought that only Christianity was God’s religion and that the Church was necessary for salvation.

Many centuries later, Vatican Council II still teaches that “the fullness of the means of salvation can be obtained” through the “Catholic Church alone.”

But the Catechism of the Catholic Church (CCC, 841) also speaks about the Church’s relationship with the Muslims: “The plan of salvation also includes those who acknowledge the Creator, in the first place amongst whom are the Muslims.”

There’s no confusion here. In fact, Vatican Council II gave us Nostra Aetate, pastoral guidance in the Church’s ad extra efforts on how to accomplish interfaith dialogue. This document to dialogue with non-Christian religions passed by a vote of 2,221 to 88 of the assembled bishops and was promulgated on October 28, 1965 by Pope Paul VI. One dissenter was Archbishop Marcel Joseph Lefebvre, an ultra-traditionalist, who wanted to establish his “one, pure, and holy” Catholic Church.

Tired of division, war and hatred

Pope Francis declares that the “interfaith dialogue is not something optional.” To dialogue, to sit down and talk, is far better than to tussle and wrestle. To agree to disagree is more important that to disagree. It boils down to a friendly reminder that what unites Muslims and Christians is far greater than what divides them.

In our time, there are still Churchmen who insist on the saying that extra Ecclesia nulla salus. I guess, I say this with reverence and love; it is now God’s problem to save others who are non-Christians.

Our concern today, of each and every men and women of goodwill, a concern that has become more urgent than ever, is to “work together to advance a culture of mutual respect in the awareness of the One Divine Grace who makes all human beings brothers and sisters.”