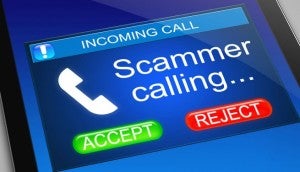 LOS ANGELES — Consumers in the United States lost a whopping $744 million to scams in 2016, according to the latest Federal Trade Commission (FTC) report.

That number could go up this year, especially considering what’s happening in the news with the executive orders on immigration and proposed legislation to repeal and replace the Affordable Care Act (ACA).

“Fraud tends to follow the headlines. What’s in the headlines is something that is likely to be transformed into some kind of a fraud,” Monica Vaca, acting associate director of the FTC’s Bureau of Consumer Protection, told reporters during a recent press call.

Vaca is urging consumers to stay updated with the news “for a clue on where we might see fraudsters hitting next.”

From last year, out of the 1.3 million fraud reports the FTC received, debt collection topped the complaint list. It was followed by imposter scams and identity theft. 77 percent of the individuals who reported their fraud experiences said they were contacted by phone, while 8 percent were by email and 3 percent were by mail.

The scammers would usually con their victims into sending money via wire transfer, as evidenced by 58 percent of the cases. On average, consumers lost $450.

“If someone is telling you to wire money, it should be a big red flag,” Vaca said.

In Los Angeles County, the Department of Consumer and Business Affairs (DCBA) is also warning communities to be wary of individuals who pretend to be “immigration consultants,” who often defraud consumers by charging fees for illegal or misleading services.

Some examples include that they claim to have inside connections with immigration agencies or encourage consumers to lie on their applications, according to the department.

Rigoberto Reyes, chief of investigations at the DCBA, told the Asian Journal that if immigrants — whether a legal permanent resident or undocumented — are seeking advice from an individual, they should verify if he or she is actually a licensed attorney.

If not an attorney, he or she must be registered and bonded with the California Secretary of State to offer any immigration-related services and must have visible signs in the office that show his or her name and bond number and a list of services and fees for each one. Failure to display these signs should be an indicator to customers not to do business with this individual.

“Even if they are registered and bonded, that only means they can provide only non-legal advice type of services. They can complete forms, translate documents and submit the package to the United States Citizenship and Immigration Services (USCIS), but they may not tell the customer whether they qualify [for citizenship], how they will qualify and what to do to qualify — that only an attorney or Board of Immigration Appeals-certified non-profit organization can do,” Reyes said.

He added that the immigration consultant must give customers a written contract in English/their native language (i.e. Tagalog) and a receipt that states how much was paid, the date and the consultant’s signature. The consultant shouldn’t keep original copies of documents like a birth certificate or a marriage license because if his or her office closes down, it would be difficult to get those back.

“Anytime someone guarantees you an outcome for your case, you know that they are either lying or they’re exaggerating,” he said. “It’s not just thousands of dollars you’re at risk of losing. The big problem is that if someone opens a petition for a benefit they don’t qualify for, it’s going to be denied and it’s going to end up most likely with a deportation order. Once you’re in that process, you can’t back out of that.”

If individuals believe they may have been victims of a scam, the FTC and LA County DCBA are encouraging them to report to appropriate agencies as these testimonies will assist in building cases.

Reyes said that these reports would help the department compile a thorough list of “bad actors” that are targeting various groups, like Filipinos.

“We would welcome calls from the Filipino community and would like Filipinos to know we are available. The sooner they call, the better,” he said.

These resources can provide an educational benefit for others so that they know what to watch out for, as well as what to do if they suspect they are being duped.

“Chances are that we may already have an investigation on a certain business and victims are extremely helpful to make sure they don’t defraud more people,” Reyes explained, adding that the department is currently investigating a business that had a lot of Filipino clients.

Vaca also noted that penalties for these scammers can be severe, ranging from prison time to requirements to pay back the money lost.

“When the Federal Trade Commission enforces the law, we always seek first an order to get money back for the people who have been victimized and we always seek an injunction, which means a court order requiring the person or the company to stop engaging in deceptive practices,” she said. The protection agency also seeks court orders that impose a ban on a particular type of conducting business.

Despite the fear that is being perpetuated in various immigrant communities, Reyes said that undocumented immigrants especially should not be scared to reach out to the DCBA for assistance, whether where to look for a certified attorney or how to recoup their lost money.

“Immigration status is something we certainly do not take into account. We will never share that information with any immigration agency,” he said. “We want them to be calm and really research and investigate their situations and get the right help before they make a decision that could make matters worse. Be prepared but don’t overreact.”

The Los Angeles Department of Consumer and Business Affairs can be reached at (800) 593-8222. The Federal Trade Commission can receive complaints at https://www.ftccomplaintassistant.gov. (By Christina M. Oriel / AJPress)