The day after Donald Trump won the US presidency in a stunning upset, Pres. Rodrigo Duterte declared the end of his personal war with the United States. “I don’t want to fight now that Trump’s there. I would like to congratulate President Trump. Mabuhay, Mr. Trump!”

Citing an example of their similarity, Duterte observed, “We both curse at the slightest of reason. We are alike,” he said.

Duterte personally conveyed his congratulations to Trump in a telephone call on December 2, when they engaged in what a Duterte aide described as a “very engaging, animated” seven-minute phone conversation where both of them extended travel invitations to the other. “He has invited me to visit New York and Washington DC. He said if I am around he wants to be notified of my presence,” Duterte said.

In a press conference held the morning after his phone call, Duterte said that Trump was “quite sensitive to our war on drugs, and he wishes me well in my campaign and said that we are doing, as he so put it, the right way,” Duterte said. Trump’s transition team only confirmed that Duterte “offered his congratulatory wishes to President-elect Trump” but did not mention any comment by Trump on Duterte’s war on drugs.

Duterte said that he was not surprised that the two men had exhibited “rapport” towards each other. He previously told the press that he thought the two of them would get along well. “We don’t have any quarrels. I can always be a friend to anybody especially to a president, a chief executive of another country. He has not meddled in the human rights,” he said. 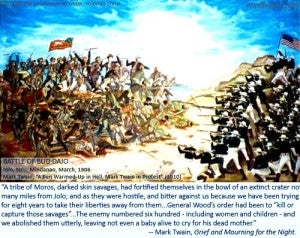 The last comment was a pointed jab at Pres. Barack Obama whom Duterte famously attacked as a “son of a whore” for criticizing his human rights record which has claimed the lives of an average of 44 Filipinos a day. Obama has said that although he very much wants to partner with the Philippines, he wants a partnership that is “consistent with international norms and rule of law.”

“We’re not going to back off on our position that if we’re working with a country, whether it’s on anti-terrorism, whether it’s on going after drug traffickers, as despicable as these networks may be, as much as damage as they do, it is important from our perspective to make sure that we do it the right way,” he added.

Obama had warned that employing unlawful means in solving a problem would only spawn even more problems. ”Because the consequences when you do it the wrong way, innocent people get hurt. And you have a whole bunch of unintended consequences that don’t solve the problem,” he said.

Duterte expressed his animosity towards Obama at a press conference held just before he left for the ASEAN conference in Laos last September. “Who is he?” he asked. “When as a matter of fact at the turn of the century, before the Americans left the Philippines, in the pacification campaign of the Moros in this island, there were around 6 million Moro population, how many died? If you can answer this question and give an apology, I will answer him…Who is he to confront me, as a matter of fact, America has one too many to answer for their misdeeds in this country.”

It was at that Manila press conference when Duterte first displayed photos of the atrocities committed by American soldiers in the Battle of Bud Dajo in 1906.

Duterte provided the answer to his question a week earlier in a speech in Davao Oriental on August 26 when he said: “There was this historical injustice committed against the Moro people. The Americans may want to know that during their campaign in Mindanao, they slaughtered 600,000 Moro people.” 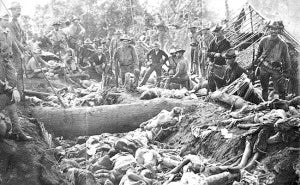 In his address to the leaders of the 18-nation ASEAN group, Duterte dispensed with his prepared speech and continued his fiery tirade against the US military killings in Mindanao showing the delegates the same gruesome photos he presented in Manila just a few days before.

“This is my ancestor they killed,” he revealed. “Why now we are talking about human rights?’ he asked.

Duterte had previously disclosed that he has Moro blood through his grandmother. His oldest son, Paulo, the vice mayor of Davao City, converted to Islam when he married a Muslim Tausug woman.

During the Philippine presidential campaign, Duterte described himself as the “Moro people’s president”. At his rallies in the Moro provinces of Mindanao, Duterte pledged to “correct the historical injustice committed against the Moro people” as his Moro supporters would chant “Allahu Akbar” (“God is great”).

Given his professed closeness to Filipino Moros, it would have been expected that Duterte would find more kinship with Barack Hussein Obama whose own father was a Muslim from Kenya and who, as president, has called for Americans to be respectful of Muslims who number 1.6 billion of the world’s population and not to lump them all as “terrorists” which, he said, would only play into the hands of ISIS.

In contrast, Trump gained political prominence by questioning Obama’s American citizenship after falsely claiming that Obama was a Muslim who was born in Kenya. After propagating this lie for five years, Trump finally retracted his claim in September but without issuing an apology to Obama.

A year ago, on December 8, 2015, Trump called for a ban on Muslims traveling to the United States. In an anti-immigration speech in Portland, Maine on August 5, 2016, Trump included the Philippines as among the “terrorist nations” whose citizens should not be allowed entry into the United States because they would not be vetted by the government beforehand.

“We are letting people come in from terrorist nations that shouldn’t be allowed because you can’t vet them. You have no idea who they are. This could be the great Trojan horse of all time,” Trump said at the rally.

A further ironic twist in Duterte’s “bromance” with Trump is that the massacre of Filipino Moros, which Duterte denounced in Laos was the subject of a speech by Donald Trump in North Charleston, South Carolina on February 19, 2016 but from the other side of the incident. In his speech, Trump narrated the story of how U.S. Army Gen. John “Blackjack” Pershing executed Muslim rebels in the Philippines as an example of how the U.S. should deal with Muslim terrorists today.

“I read a story, it’s a terrible story, but I’ll tell you,” Trump began. “Early in the century, last century, General Pershing — did you ever hear — rough guy, rough guy. And they had a terrorism problem. And there’s a whole thing with swine and animals and pigs — and you know the story. They don’t like that. They were having a tremendous problem with terrorism. Pershing caught 50 terrorists. He took 50 bullets, and he dipped them in pig’s blood. And he had his men load his rifles and he lined up the 50 people, and they shot 49 of those people. And the 50th person, he said, ‘You go back to your people and you tell them what happened.’ And for 25 years, there wasn’t a problem.”

Trump was wrong. It was not Gen. Pershing who ordered the attack that led to the slaughter of Muslims at Bud Dajo but Gen. Leonard Wood who himself would later seek the presidential nomination in the 1920 Republican primaries. 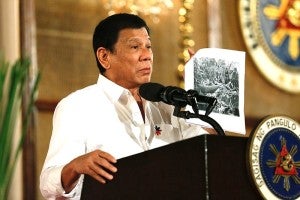 In 1906, Gen. Wood was the governor of Moro province when he imposed a cedula tax on the Moros, which created great resentment against American rule. The Moros who refused to pay the cedula tax fled to the volcanic crater of Bud Dajo where water was plentiful and the people could farm rice and potatoes.

On March 2, 1906, Gen. Wood dispatched an assault force of 600 American soldiers to climb to the top of the crater where, on March 5, 1906, they fired their weapons into the crater where the Tausug Moros were holed up. Out of the estimated 800 to 1,000 Moros at Bud Dajo, only six survived. Eyewitness reports that corpses were piled five deep, and many of the bodies were shot multiple times. The photos of that slaughter still haunt Duterte.

Trump and Duterte may have different views about what American soldiers did in Mindanao in 1906 but they are apparently willing to ignore those differences because they share one other “huge” similarity: they are both alpha males.

As columnist Jonty Cruz observed: “For better or worse, both men act and live like they can do whatever the hell they want. They don’t worry about the consequences that come their way. They think little of those who are against them and use their power (whatever shape or form that may be) to pressure others and get their way. It doesn’t matter if people hate them for it or not. They don’t give a damn, quite frankly, because for Trump and Duterte, it’s their way or the highway.”