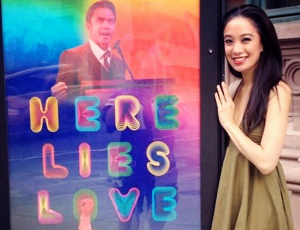 SEATTLE — Filipino-American actors will have lead roles in “Here Lies Love,” a musical about the life of Imelda Marcos, at Seattle Repertory Theatre starting April 7.

Set in a disco where audiences stand and move around with the actors, the show opened off-Broadway in 2013 and won the Village Voice Obie award for music (David Byrne and Norman “Fatboy Slim” Cook) and lyrics (Byrne).

Jaygee Macapugay reprises her role as Imelda. The New York Times praised her performance in the 2014-2015 run as “devastating … adds an extra dash of molten steel that makes this Imelda a red-hot chiller.”

She says, “The music is so much fun. The songs are a truncated anthology of Imelda’s life up until the People Power Revolution. It seemed as if her life had its own soundtrack. David was fascinated by Imelda installing a disco ball in one of her New York City residences. He was fascinated with the idea of how extremely powerful people live in their own bubble.”

Reprising their roles from the first two runs are Conrad Ricamora (“How to Get Away With Murder”) as Benigno “Ninoy” Aquino, and Melody Butiu (“Rizzoli and Isles”) as Estrella Cumpas, Imelda’s nanny.

Manila-based recording artist Mark Bautista reprises his role as Ferdinand Marcos, which he first played in the 2014 staging at the Royal National Theatre in London.

Ramos won a Tony award last year for his work on the play “Eclipsed,” starring Lupita Nyong’o. (“Eclipsed” is playing in San Francisco until March 19.)

Jaygee Macapugay and Melody Butiu both recently had their Broadway debuts: Macapugay in Andrew Lloyd Webber’s “School of Rock” and Butiu in “Dr. Zhivago.”

Both also have personal family histories tied to the Marcos dictatorship. Their respective parents left the Philippines because of Martial Law; Butiu’s parents even had to leave her elder brother behind in the first few years of their stay in the United States. She notes that while it’s important to consider physicality and speech patterns in any role, “It’s equally important to marry those ideas with the dictates of the show’s text, music and choreography.”

When crafting characters for the stage, “I start with my own opinions on the character, however, the final ‘product’ is always a collaboration with the creative team. That collaboration is one of the many reasons I love theater.”

Both actresses researched to prepare for their roles, from reading books and news articles to interviewing people who had spent time with the Marcoses.

Macapugay considers Ramona Diaz’s 2003 documentary Imelda as a great resource. “Seeing and hearing Imelda discuss in her own words her personal account of her rise to power and her overall life philosophy was fascinating and extremely helpful in creating the character.”

Butiu is re-reading The Untold Story of Imelda Marcos by Carmen Navarro-Pedrosa. “It has the most detailed account of my character, Estrella Cumpas.”

“My friend and co-star Conrad Ricamora shared a quote by Ninoy Aquino that really resonates with me regarding the biggest message of the show: ‘We should not depend on one man; we should depend on all of us. All of us are expendable in the cause for freedom and therefore I say stand up now and be a leader, and when all of us are leaders, we will expedite the cause of freedom.'”

Butiu has been involved with this musical since it was still in its concept-album phase in 2005. Her work in the 2013 staging prompted The New York Times to praise her “rich voice” and to contend that she should’ve been nominated for a Tony.

“It’s awesome to know that Filipinos in the audience can see their perspectives being shared, but also that others can see the universality in our experiences. Filipino stories are human stories.”

Both are enjoying their return to Seattle.

Though born in New York, Butiu was raised in Washington state and lived in a Seattle suburb for a while. “This is my first show in Seattle after not living here for many years. I can’t wait to spend time at the Museum of Pop Culture, also known as MoPOP, the Chihuly Garden and Glass, as well as finding some great hiking trails.”

Born and raised in Chicago, Macapugay has performed in Seattle before. “I’m looking forward to eating all the fresh seafood at Pike Place Market, including raw oysters, which are my favorite. In my first week here, I’ve already eaten sushi three times! I’m looking forward to eating at Pike Place Chowder, Elliott’s Oyster House, and Blueacre Seafood.”

The original cast included Jose Llana as Ferdinand Marcos. Llana is currently playing the King of Siam in the US touring production of “The King and I” (Pittsburgh, Boston and Fort Meyers in April 2017.)

READ about Gia Macuja-Atchison’s work on this musical here.