DC Fil-Ams join 'A Day Without a Woman' strike

DC Fil-Ams join ‘A Day Without a Woman’ strike 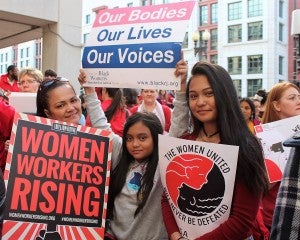 Patricia Fudolig (left) and her two daughters, Isabel and Paula join hundreds of protesters rally at the doorsteps of the Department of Labor. INQUIRER/Jon Melegrito

WASHINGTON, DC — Sixteen-year-old Paula Fudolig, a sophomore at Magruder High School in Gaithersburg, Maryland, missed the massive Women’s March on Washington in January, so when she learned of another organized protest here in the nation’s capital, she was determined not to miss it.

“I really wanted to be there but I was out of town on a family trip,” she says. “I’m thrilled that I got a chance to participate in my first-ever demonstration. I totally support women’s rights, but I also want to learn more about other issues that brought all these people together.”

Last Wednesday, she skipped school. She convinced her younger sister Isabel, 10, and their mom, Patricia, to also take a day off and join hundreds of other women. They all converged at the doorsteps of the Department of Labor on Third and C Streets, then marched on Constitution Avenue for a rally at a park near Capitol Hill. 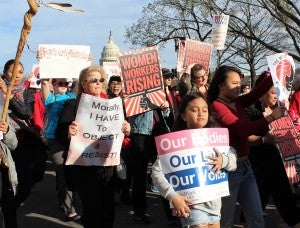 Ten-year-old Paula Fudolig proudly marches with her sister and mother (right) along Constitution Avenue to a park near Capitol Hill for a “Women Workers Rising” rally. INQUIRER/Jon Melegrito

Billed as “A Day Without A Woman,” the strike coincided with International Women’s Day. Organizers said their goal is to bring attention to “the enormous value that women of all backgrounds add to our socio-economic system — while receiving lower wages and experiencing greater inequalities.”

Wearing red to “show love and sacrifice,” protesters carried signs calling for equal pay, fair living wage, paid leave, labor rights at work and an end to sexual harassment and workplace violence and discrimination. Like the march in January, organizers say the protest is in reaction to President Donald Trump’s position on women’s issues.

“I am a mother who gave birth to four children,” Patricia Fudolig, 45, says. “Like other mothers, we have an important role in our community – to raise our daughters so they learn their true worth as women. I want them to grow up to be independent-minded, to think for themselves and stand up for their rights.”

Patricia joined her first protest action 25 years ago in Manila while studying for a B.S.B.A. Accounting degree at the Lyceum of the Philippines. “We walked out of classes to protest planned increases in tuition fees,” she recalls. “That’s when I realized what collective action can do. I have since instilled this value in my children, that when we fight together, we will win.” 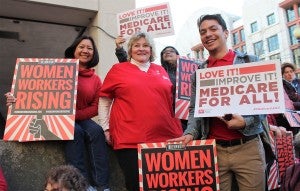 Twenty years ago, Patricia immigrated to the United States and became a citizen a few years later. She and her husband, a chef, raised a family in Gaithersburg, a Maryland suburb near the nation’s capital. She voted for the first time nine years ago for President Obama.

“I’m very proud of my daughters,” Patricia says. “It means a lot to me to be together with  them marching for women’s rights, and adding our voices especially on behalf of the vulnerable and marginalized, like the millions of undocumented immigrants who now live in fear because of Trump’s policies. As an immigrant working multiple jobs, I know we contribute immensely to this country. America welcomed me and gave me better opportunities to give my family a better life.”

Daughter Paula does her part of giving back to the community by being a mentor to Middle School students. Once a week, she meets with four to five students. “I talk to them about things they feel insecure about, about image problems or their sense of identity,” she says. “It’s empowering when you make them feel less alone.” 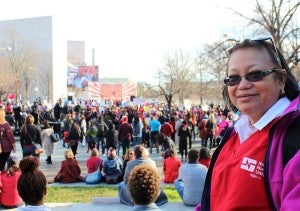 Joining the rally, she says, has taught her more about issues she never knew before. “As a young woman about to head into the world, I hope to be able to make the same amount of money as my male counterparts when I begin working,” she points out. “I’d also like to be able to choose what to do with my body.” She is a member of her school’s Feminist Club.

“It’s important for us to be involved because we are lucky enough to have the freedom to speak out about what’s bothering us,” she adds. “Just participating has an impact because it shows those oppressing us that we won’t go down without a fight.”

Other Filipino Americans who showed up at the march and rally were two union organizers from California. Grace Himatay and Billy Yates are activists with National Nurses United (NNU), the largest union of registered nurses in the United States. They are in the area to help nurses at Holy Cross Hospital form a union.

“Unionized nurses are in a better position to demand better pay and respect in the workplace,” Himatay says. “Women comprise 92 percent of RNs, with women of color 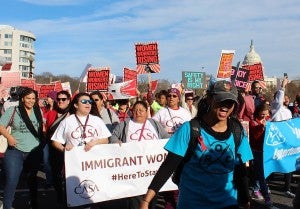 Hundreds of workers march from the Labor Department building to a park near Capitol Hill to demand pay equity, fair living wage, paid leave, labor rights at work and an end to sexual harassment and workplace violence and discrimination. INQUIRER/Jon Melegrito

comprising more than 21 percent.” She points out that ‘A Day Without A Woman’ in the health industry has an enormous impact. NNU was among the major sponsors of the strike.

According to the U.S. Census, women make up more than 47 percent of the workforce and are dominant in such professions as registered nurses, dental assistants, cashiers, accountants and pharmacists. They make up at least a third of physicians and surgeons, as well as lawyers and judges.

Women also represent 55 percent of all college students. Still, American women continue to be paid less than men, earning 80 cents for every dollar a man makes. The median income for women was $40,742 in 2015, compared with $51,212 for men.

Against repeal of Obamacare

Maria Ronquillo, an RN at the Veterans Affairs Medical Center in the District of Columbia was also at the rally to be in solidarity with other workers.

“I’m very much concerned about the repeal of Obamacare and its devastating impact,” Ronquillo says.  “People will no longer able to obtain Medicaid coverage under the law’s expansion, and lots of people would be unable to afford health insurance without the help of federal subsidies currently provided under the law. As a health professional, I am deeply worried.”

Ronquillo, who is also a member of NNU, has been actively involved in the last three years fighting for the Patient Protection Act and demanding action from the District City Council. The measure would require minimum numbers of nurse-to-patient ratios and solve understaffing at six District hospitals. In her 22 years at the VA hospital, Ronquillo knows how short staffing puts patients at risk. “I have experienced what it’s like, both as a nursing care giver and as a patient myself,” she said. 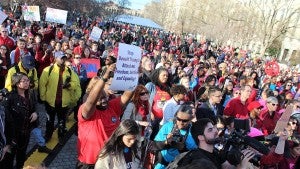 She adds: “Now more than ever, we – as women workers – must rise and demand fair treatment for our service and sacrifice. We call attention to the labor we provide because we deserve the right to be heard and treated with dignity and respect.”

Women in more than a dozen cities across the U.S. and 50 countries around the world protested on March 8. Organizers vow there will be more strikes in the coming months. 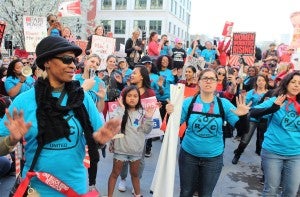 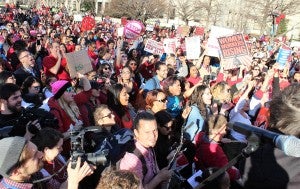