Getting to know H.E.R., the Fil-Am R&B singer with 5 Grammy nods

Getting to know H.E.R., the Fil-Am R&B singer with 5 Grammy nods 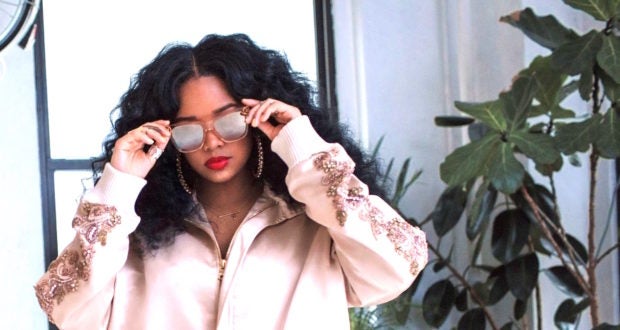 Propped in front of violinists and a harpist playing the dreamy intro to the single “Focus,” H.E.R. swayed in a haze of cyan and magenta fog as she struck the audience with the first line of the song, “Me? Can you focus on me?”

It’s less of a call for us to merely look at and acknowledge her as a strictly visual spectacle, but more of a petition to pay attention to the soulful expression emanating through the mic.

Like water, her voice is soft yet unyielding. Her flawless harmonies permeated the room with the power of unconstrained feeling and soul so rare to find in a rising star. Before she transitioned into “Best Part” with fellow R&B up-and-comer Daniel Caesar, she offered a robust electric guitar solo with skill and authority rarely seen in young musicians these days.

As music begins to rely more on computer programs and other digitized methods of producing and modifying, experiencing a truly live performance with instruments is becoming a rare bird. It’s even rarer that artists sound just as good — or in H.E.R.’s case, better than the studio versions.

Amid working on her debut album, H.E.R. (which stands for Having Everything Revealed) has racked up a fortuitous and busy 2019.

And that’s just the beginning. She’s also performing at the 61st Grammy Awards — airing this Sunday, Feb. 10 on CBS — and will be performing as one of the bigger acts at the Coachella Valley Music and Arts Festival.

She’s currently working on her debut album, which she briefly took a break from to speak with the Asian Journalon Wednesday, Jan. 30.

“I always say I could be taking a midterm right now, but I feel more blessed and grateful than anything that I get to do what I love every single day,” H.E.R. says in an interview, as her enthusiasm beams through the phone.

A performer through and through

Born in 1997 to Filipina-American Agnes Wilson and African-American Kenny Wilson in Vallejo, California, H.E.R. — whose real name is Gabriella “Gabi” Wilson — said she was raised with a “good balance” of the Filipino and black American cultures in her home. H.E.R. shared a photo on Instagram of her on a Spotify billboard in Brooklyn.

Her maternal grandparents were first-generation Filipino immigrants who made sure that Filipino traditions were not lost in their familial diaspora. They spoke Tagalog, and although she “doesn’t speak [it] as much as she used to,” she understands the language.

“I’m really grateful for my mom who encouraged me to be a hard worker, you know, that’s one thing about Filipinos, they’re really hardworking people,” H.E.R. warmly remarks.

And, of course, H.E.R. says that her household was no stranger to the ubiquitous karaoke machine(s) that exist in so many Filipino homes.

“She wanted me to sing Alicia Keys songs, Mariah Carey and all those love ballads, and I also sang some Tagalog songs, like I learned Sharon Cuneta songs, too. She’d bring her friends over to the house and ask me to sing for them,” H.E.R. remembers with a laugh.

But it wasn’t just karaoke that gave her exposure to the performance life. Kenny Wilson used to perform in a blues cover band which used to rehearse in their living room.

“It was a lot of James Brown and a lot of soul music and a lot of R&B,” H.E.R. shares. “And that influenced my own music heavily. I’ve always been drawn to that soulful and emotional music with real lyrics and those lyrics that make you feel something.”

Growing up biracial opens the door to a myriad of identity crises, but for H.E.R., it was a source of empowerment and an opportunity to connect with a diverse array of people.

“[Being biracial] helped me more than it did hinder me because I always tried to conquer any doubt I had in myself,” she remarks. “What I learned to do was assimilate, but not in a way where I had to conform or be something else that I wasn’t.”

She adds that she embraced a diverse upbringing and that music provided an interpersonal gateway for her to connect with people of different backgrounds in the cultural hub that is the Bay Area.

From teen prodigy to R&B sensation

When it became evident that she was a born performer, Agnes and Kenny Wilson fully supported their daughter’s aspirations in music.

When she was 12 years, H.E.R. was brought on the Today Show to cover Alicia Keys songs on the piano, and soon after, competed on Radio Disney’s “The Next BIG Thing.”

In 2014, she signed to Sony’s RCA Records and released a single called “Something to Prove” under Gabriella Wilson.

“For me, it wasn’t really a decision so much as it was a fact that this was what I was meant to do. There wasn’t really an alternative career path for me,” H.E.R. explains.

And then in 2016, she emerged with her new persona as H.E.R. to release her debut extended play “H.E.R. Vol. 1” which garnered acclaim from industry juggernauts like Usher, Pusha T and Wyclef Jean, as well as label-mate and childhood inspiration, Alicia Keys.

That EP would end up on many publications’ end of the year list, including NPR’s “5 Essential R&B Albums You Slept On.” In 2017, she released a follow-up EP, “H.E.R. Vol. 2,” which further hoisted her up.

Both albums represent a contemporary vulnerability with its beautifully crestfallen lyrics most people would turn to in the midst of heartbreak. We find solace in the resilient conviction she portrays, like in the song “As I Am” on the EP “I Used to Know Her: The Prelude” released in 2018.

In addition to collaborating with Daniel Caesar on “Best Part,” she has also worked with fellow rising R&B star Ella Mai, Khalid and Bryson Tiller. Clout. Flex. Influencer.Influencers flex to gain clout and more clout heightens your own influencer brand. This is all Internet speak for a new, millennial brand of prestige and celebrity shaped by the idea of one’s personal brand.

Amplified by the continued merging of pop culture and social media, this trifecta forms the millennial mission statement for social upward mobility. In this world where celebrity transparency and intimacy are everything, and mysticism in pop culture has become obsolete, it’s become rare for an artist to take the backseat and allow their art to be the selling point.

She only goes by H.E.R. and has curated an enigmatic persona, so much that for this interview, the Asian Journalwas instructed to address her as H.E.R.

For most performances, she wears dark sunglasses. In her album cover art, her eyes are blacked out and you rarely get a look at her face. And unlike so many stars, she’s never one to overshare and maintains a low-key profile.

“I wanted the music to be No. 1, I wanted it to get the attention, the forefront, the No. 1 focus, and I wanted people to just listen and love the music because sometimes we get caught up in the gimmicks, the looks, and the glitz: these things that don’t really matter to me,” she shares.

Social media has become a crucial application in celebrity promotion that is conducive to guerilla marketing that relies on gimmicks and stunts to spark conversation. The idea that all publicity is good publicity doesn’t jive with H.E.R., who has chosen to stay away from those means of influence.

Though she’s maintained anonymity, there is still a warmth in what she shares with the world. She’s vulnerable and honest in her presence and in her records, but at the end of the day, you still don’t really know her.

Despite straying away from the trend of increasing intimacy between celebrity and fan, she is rising in the ranks to become the next big superstar in, not only R&B, but in the music industry at large.

But achieving celebrity status is hardly the objective.

“I definitely don’t try to do what everyone else is doing at the moment,” she says. “I try to trust my gut and trust what’s got me this far, which were honest songs that I was afraid to do. Sometimes the most daring thing — the thing that you’re most afraid to do — is the thing that’s gonna get you from point A to point B. You have to dare to take risks and dare to be you. When you try to be successful trying to be someone else, the success eventually runs out.”