Walter Ang’s book, Barangay to Broadway: Filipino American Theater History, offers a beautiful, though sometimes painful, way to learn history. It’s a history not only of Filipino American theater, but also of the relationship between the United States and its first colony, the Philippines.

Ang’s history of Filipino American theater starts in 1902 and moves through the decades to the 2010s. I doubt there’s a single Filipino American play or playwright missing from this brilliant compendium, yet the prose really flows. 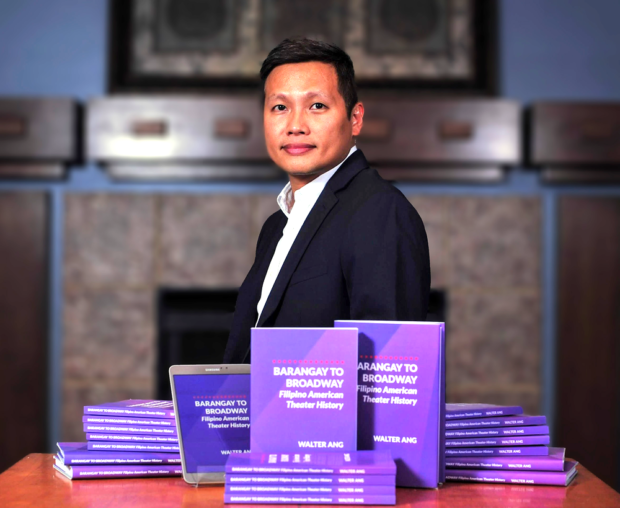 The book’s sometimes startling information reminds us that the relationship between the United States and the Philippines has been tumultuous. It remains within us and our artistic life as a subliminal handicap at worst and as a creative tension that finds brilliant expression, at best.

Ang begins with high drama, going back to August 1898, when the United States came “to help” the Filipinos, who had all but won the war against Spain. Excluding the Filipinos, the two powers agreed to stage the Battle of Manila. Spain “lost,” and for the sum of $20 million, Spain gave the Philippines to America. The entire show was a farce, but with very serious consequences: the Philippine-American War ensued and continued for a decade until full American victory.

Almost as soon as the Americans claimed the Philippines, they passed the Sedition Act, making it a crime for Filipinos to advocate for independence. The theater, however, was used as a vehicle of resistance. The drama simbolico, a drama form introduced to the culture under Spanish rule, became a very useful form of protest under American rule.

In the United Sates, at least one show—George Ade’s 1902 comic opera “Sultan of Sulu”—revealed objections to the U.S. occupation of the Philippines. Nevertheless, the Filipino characters in the opera were not played by Filipino actors.

Early performances by Filipinos in the U.S. were a much more blatant travesty: the exhibition of Filipinos at the World’s Fair in St. Louis, Missouri in 1904. There were dozens of Philippine exhibits, but the one that stole the show was that of the Igorots who were on exhibit with Africans, dwarves, and bearded ladies. By the time such exhibits were banned in 1914, “over 200 Bontoc men and women had performed … in cities such as New York, Chicago, Los Angeles, and San Francisco.”

In 1924, under U.S. colonial rule and exempted from the provisions of the Asian Exclusion Act, Filipinos were considered nationals and could move freely from the Philippines to the U.S.

They came to work in the fields of Hawaii and California or the fish canneries of the Northwest. However, they could not vote. Neither could they buy land or own a business or a house. They could not marry white women and the ratio of Filipino men to Filipino women was about 15 to 1. This meant trouble as you can imagine, and soon the Filipino Exclusion Act (1934 Tydings-McDuffie Act) was passed.

However, the pioneers were already here and writing for newspapers as well as for theater.

Ang takes us through the decades with interesting facts and beautiful moments, and, inevitably, through the continuing struggle of Filipinos in their relationship with the United States and to themselves.

Baltazar “Bob” Fernandez Flor immigrated to Seattle and, in the 1930s, established the Filipino Catholic Club Drama Guild.  His nephew, Robert, who was born in Seattle and became a playwright himself, unearthed and preserved the plays of Baltazar.

Writers up and down the West Coast and in Hawaii wrote for actors and dancers and musicians. Ang lists and describes artists whose surnames still resound as their progeny carried on “the work.” Valentin, Baclig, Baltazar, Lebornio, de los Santos, Inocencio and Salamanca.

One of the most recognized names on the West Coast is that of Lucia “Lucing” Funcion Cordova, who immigrated to Stockton and wrote and directed zarzuelas which were performed there in the 1930s.

Wandering into America’s Great Depression, writer Carlos Bulosan, whose rough and tumble beginnings took him through the canneries, the fields, and into the cities, became ill with tuberculosis and landed in a Los Angeles hospital. The Los Angeles Public Library was nearby, so as his condition improved, he spent most of his days in the library studying English, reading English, and writing in English.

By the 1940s, national magazines such as the New Yorkerand the Saturday Evening Postwere publishing his stories, including one about Magno—a short, unattractive, unkempt, Filipino boy in love with Clarabelle, a big blonde he has never seen except for a blurred photo in a Lonely Heartsnewspaper.

“The Romance of Magno Rubio” has been adapted for the stage by Nancy Rebusit for Northwest Asian American Theatre in Seattle in 1984 and by Lonnie Carter for Ma-Yi Theater in New York in 2002.

With this story, we return to drama simbolico:the poor brown nation (Magno) loving the ideal of equality with the rich white nation (Clarabelle). America does seem to believe that all men are created equal. But one is forced to wonder what is meant by the word “men.” It’s as blurry as Clarabelle’s photo.

Playwright Conrad Panganiban was inspired by Larry Itliong and Philip Vera Cruz, who risked their lives in 1965 by demanding to be treated with dignity, even in the fields. They called a strike that lasted from 1965 to 1970. Panganiban wrote “Welga,” a play about the now legendary and successful grape strike.

In 1968, there was also a strike in the City of San Francisco when 150 old Filipino and Chinese men, mostly bachelors, refused to leave the International Hotel where some of them had lived for 50 years. The manongs of the I-Hotel refused to follow the eviction orders served to them. In the end, they were evicted in 1977, but it had become clear that things were definitely changing. Their story was adapted for the stage by Philip Kan Gotanda in 2015 as “Remember the I-Hotel” based on a short story by Lysley Tenorio.

In the last section of his book, Ang interviews director Ralph Peña, noting that his theater company Ma-Yi in New York hadn’t “done a Filipino … play since ‘The Romance of Magno Rubio’ in2003.” Which is why they brought back “Flipzoids” (last staged in 1996), in a way, to bring back the Filipino audiences and because “there’s a new generation of Filipino Americans … [that we hope] will find it meaningful … Finally, the national discourse on identity has deepened.”

Walter Ang has completed a monumental project, covering one hundred years of Filipino American theater history. The playwrights, the plays and those who bring performances to the stageall comealive as we read about them in this excellent reference book.  From Barangay to Broadwayis very informative and is also a real pleasure to read.

Los Angeles-based Carlene Sobrino Bonnivier has published several novels and was Chief Editor of the anthology Filipinotown: Voices from Los Angeles. She is also the producer and librettist of “Warrior: The Musical,” which honors the nine-year struggle against eviction by the manongs of the International Hotel in San Francisco.