Three simple ingredients that when heated, mixed, poured into oiled or banana leaf-lined ramekins, steamed for an hour or so, and refrigerated for much longer, turns into a chewy and sweet cake that many look forward to during the Lunar New Year.

Take it a step further by slicing it, dipping it in egg and frying it on a skillet — the sticky treat transforms into a snack that’s gooey in the center, but caramelized on the outside, capable of bringing a taste of nostalgia to Filipinos of all ages. 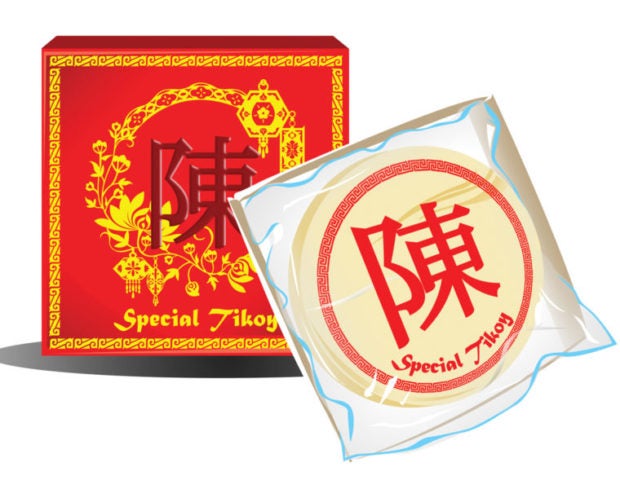 While it isn’t uncommon to eat tikoy throughout the year, it is undoubtedly the go-to dessert for Lunar New Year in many Asian countries including the Philippines where Chinese influence dates back hundreds of years.

Like much of the Chinese dishes that have become a part of Filipino cuisine, tikoy is believed to likely have been brought to the Philippines during the late 19th century by Hokkien migrants from the Fujian province.   The Filipino word tikoy comes from the Hokkien word tee keuh which translates to “sweet cake.”

The founder of the famous Eng Bee Tin bakery, Chua Chiu Hong, is widely believed to be the one responsible for its popularization when opened a simple stall in the heart of Manila’s  Chinatown to sell traditional Chinese delicacies in 1912.  Tikoy was, of course, included.

Today, Eng Bee Tin — though still a leader — is just one of the many sellers of tikoy during the Lunar New Year.  In fact, a quick walk through Ongpin Street in Chinatown, brings one to towers of red Tikoy packages, stacked up outside storefronts and ready to be given as gifts.

But how did Tikoy become such an auspicious Lunar New Year staple in the first place?

Meaning “year higher,” Nian Gao — the Mandarin translation from which tikoy was derived — has become the symbol of achieving something greater each year whether it be in health, in one’s career, monetary wealth, grades, or even a child’s height.

And because Nian Gao is regarded as one of China’s oldest foods, how it came to be such a symbol traces back to numerous different stories, from historical to mythological.

One origin story, which is told especially during Chinese New Year, involves a monster called Nian that stayed in a cave in the mountain but would come out to hunt when it was hungry.  But as animals went into hibernation during the winter, people feared that the monster would resort to eating humans to fulfill its hunger.

Along then came a villager named Gao who in anticipating the possibility of the monster coming down, left rice pastries outside the villagers’ doors for the monster to eat instead.

Upon finding and eating the rice pastries, the monster became full and went back up the mountain.  The villagers, who were spared the possibility of being eaten, celebrated their survival and named the rice pastries “Nian Gao.”

Another origin story dates back to pre-Imperial China where the rice cakes were said to have saved a besieged village of Wu (present-day Suzhou) from starvation.

The story says that a general by the name of Wu Zixu gave instructions to the villagers of his town to seek refuge under the city walls, should they ever be attacked.

After he passed away, the villagers did find themselves under attack and fell hungry.  Upon remembering the instructions, they dug under the walls and found enough rice cakes to sustain them.

To honor Wu Zixu, the villagers started a tradition of celebrating every New Year by making Nian Gao.

Then there’s the old legend of a “kitchen god” dating back more than 2,000 years ago during the period of Confucius.  According to legend, people would offer Nian Gao to the kitchen deity who would make reports on the family’s behavior throughout the year, much like the Western character Santa Claus.

But as it usually is with legends and myths, what has stuck throughout the years despite the different origins stories, is the rice cake’s auspicious significance.

As people get ready to celebrate this upcoming Lunar New Year with tikoy, its symbolism and ties to increasing prosperity will surely be kept in mind.