Police in China arrest content pirates that stole from ABS-CBN, others

Police in China arrest content pirates that stole from ABS-CBN, others

Photos of the illegal IPTV boxes found at the Shenzhen Welnavi office in China owned by Alan Zhou and Roland Lu show they’re marked as “Filipino Channel” and then marketed in United States, Canada and other countries as Filstream. CONTRIBUTED

DALY CITY, California – Police in Shenzhen, Guangdong, China arrested owners and operators of a company that illegally programmed pirate IPTV boxes and marketed and sold them around the world under the “Filstream” brand.

Arrested and charged with copyright infringement by the Shenzhen Police on Wednesday, March 2 were Alan Zhou and Roland Lu, the owners and operators of Shenzhen Welnavi Technology Co., LTD (“Shenzhen Welnavi”) factory.

Two senior programmers at the factory were also arrested and charged with copyright infringement with a maximum penalty of seven years in jail.  Shenzhen Welnavi has been completely shut down.

All those arrested are expected to remain in custody pending trial, which is likely to take place next year.  The Shenzhen police team conducted a raid of Shenzhen Welnavi on February 28, seizing the company’s servers and business records as part of the police team’s criminal investigation of the illegal distribution network.

The arrests in China were the culmination of an eight-month worldwide investigation spearheaded by the Philippine media and entertainment network ABS-CBN. 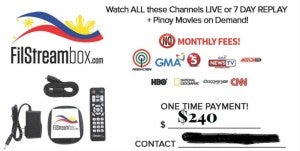 A sample of the marketing materials that distributors of the illegal Filstream box are posting on Facebook. CONTRIBUTED

To date, the investigation has resulted in the arrest and seizure of Filstream box distributors in Illinois and Florida. The criminal arrest and prosecution of additional distributors in multiple locations around the United States and Canada is ongoing and expected within the coming weeks.

“The police have determined that Alan Zhou and Roland Lu ran a global piracy operation with the intent to interfere with ABS-CBN’s legitimate business.  ABS-CBN/TFC distributes its content through cable providers, its own TFC IPTV boxes, as well as via digitally on tfc.tv.  Alan Zhou and Roland Lu have disrupted ABS-CBN’s legitimate business,” said ABS-CBN’s AVP & Head of Global Anti-Piracy Elisha Lawrence.

Lawrence also revealed that ABS-CBN plans to continue to enforce criminal and civil actions against anyone who steals its movies and TV shows and offers them via IPTV box, free websites or on Youtube, Daily Motion and Facebook.

“ABS-CBN spends millions of dollars each year producing these TV shows and movies and we will not allow these pirates to give them away for free,” Lawrence explained.

Photos of the offices of Shenzhen Welnavi in Shenzhen, one of the five largest and wealthiest cities in China. CONTRIBUTED

Lawrence had harsh words for Zhou and Lu. “I am glad to see them, and their distributors, being criminally pursued by every means under the law in China and the U.S.  I am very grateful for the excellent work by the police in Shenzhen, China, Illinois and Florida.  It is a global operation with an army of investigators throughout the world that helped us get the evidence to support the raids in China and the United States.”

“The management of ABS-CBN has absolutely no tolerance for content piracy. We will continue to do everything in our power to prosecute all who would attempt to pirate our content,” said Lopez.  “Piracy is like a cancer in the content industry. The pirates, in their selfish pursuit of short-term profits, have absolutely no regard for their negative impact on the industry. We will continue our vigilance in finding and prosecuting all pirates regardless of the cost.”

As the Filstream signal has been shut down, for all victims who purchased the Filstream boxes, call 1-866-746-6988 now to receive one-month FREE TFC subscription or visit www.tfc-usa.com/tfcbox for details.