Shutdown is over, is Trump over too? 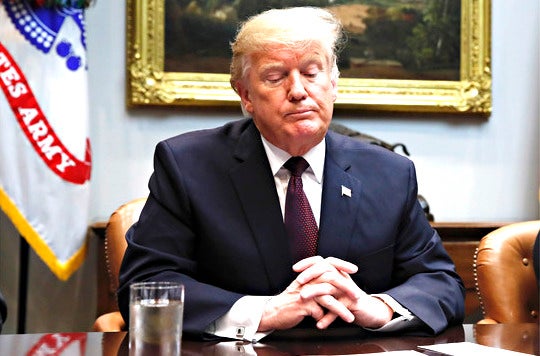 President Donald Trump pauses while speaking during a healthcare roundtable in the Roosevelt Room of the White House, Wednesday, Jan. 23, 2019, in Washington.AP PHOTO

My furloughed Filipino friend, the DC worker who has missed two paychecks due to the temporary government shutdown, reported to work on Monday.

But now he’s skeptical about the temporary nature of the shutdown’s end, not to mention Donald Trump, and the possibility that the worst president in U.S. history could use it again as a bargaining tool.

I’ve kept him anonymous to both protect him and allow for candor. He’s bitter about the misuse of a shutdown.

“The house should pass new rules to fix the appropriations process,” my friend who left a tenured position in higher ed to join a federal agency. He said automatic continuing resolutions would put an end to government shutdowns as a negotiating tool.

Agreed. Shutdowns only seem to be useful if you like shooting yourself in the foot. They should be banned from the political tool kit.

During the shutdown, my friend was prohibited by law from calling fellow furloughed workers to talk about the work that’s piling up. He couldn’t use his government-issued laptop or phone. Nor could he stop by his office.

But when Trump held his Rose Garden news conference alone last Friday, my friend was only mildly elated to see Trump blink.

“We have reached a deal to end the shutdown and reopen the federal government,” Trump said to his staff’s applause, perhaps the only ones in Washington compelled to celebrate.

What were they celebrating? Trump got nothing. No money for a wall. Nothing. The Democrats got what they wanted: a re-opened government, and continued talks.

And the 800,000 furloughed workers will get back pay “quickly,” as Trump promised. But my friend was still wary.

The agreement only keeps the government open until Feb. 15, a window of time to try to make a new deal. Essentially, the shutdown may be over, but Trump’s eyes remain shut.

Trump’s still dreaming about his wall. Trump said bipartisan discussions would take place, and he even threw a bone to the Democrats when he talked about a “smart wall,” not a medieval wall.

But he continued to make dubious claims about stopping drugs that come across the southern border and find their way “into schools.” And his favorite story about women bound and gagged in the trunks of cars and driven across the border. All of it, in Trump’s view, would  be remedied with his fantasy border wall.

“So let me be very clear, we really have no choice but to build a powerful wall or steel barrier,” Trump said in closing. “If we don’t get a fair deal from Congress, the government will either shut down on Feb. 15 again or I will use the powers afforded me under the laws and the Constitution of the United States to address this emergency.”

There’s the threat. After the longest shutdown in history could come “Shutdown: The Sequel.” And if not a shutdown, Trump’s still thinking of bypassing Congress and getting his wall money by his own regal signature.

“This was an (effing) waste of time,” my friend told me.  “Imagine all the stress (of all us federal workers) of not being able to provide for your family. It’s all on Trump.”

What about all those people cheering at the Rose Garden?

“Even in defeat, you got to call it a victory,” he said. “That’s the MO of entitled, mediocre white males: you never lose.”

The irony is the deal that’s on the table now is the same one that was there in December, which Trump had agreed to, but then changed his mind after right-wing pundits declared his presidency would be over if he gave in on the wall.

Shutting down the government and holding out for a wall created even greater security concerns from air traffic, to food safety, to unpaid military and law enforcement. Unpaid FBI agents had to arrest Trump campaign advisor Roger Stone on Friday. I’m sure that gave Trump a little push to change the narrative by reopening government. All that and the poll results showing that the public was blaming him for the shutdown.

Add it all up and you get the Friday Rose Garden performance, when Trump caved toward the left.

“Trump is weak,” my friend said. “He has no idea how to govern. If Democrats can’t beat him in 2020, this country will deserve his second term.”

It’s true. Trump blinked. Both eyes. And his eyes are still shut. It’s like he’s bird-boxing the presidency. But can the Democrats and Pelosi lead the way and unite the country?  We need real leadership now.

We don’t need a shutdown sequel.

Two more live performances in San Francisco, Feb. 1 and Feb. 7. “Emil Amok: Sex and Affirmative Action,” is about what Filipinos faced in the 1920s in America. It’s my father’s story entwined with mine.

Funny, tragic, and very Filipino.  At San Francisco’s Potrero Stage Theater,  it’s part of a solo show festival. A ticket gets you my show, and another performer that same night.

And use my special friends and family promo code:

Emil Guillermo is a veteran journalist and commentator who writes a column for the Inquirer’s North American Bureau.  Listen to him on Apple Podcasts. Twitter @emilamok