A medical mission and the lady with the external fixators

A medical mission and the lady with the external fixators 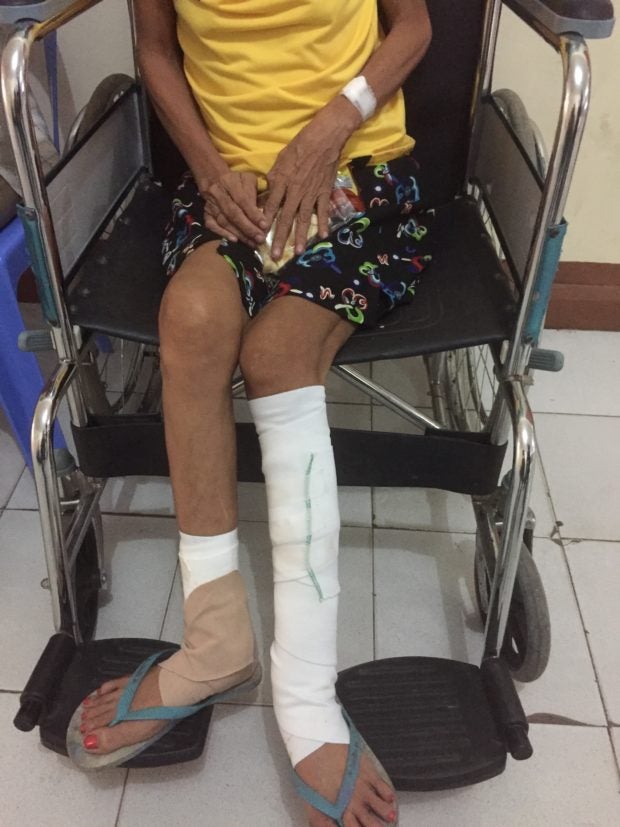 Medical/surgical missions are replete with war stories. Like the teenager who underwent a colostomy (an exteriorized segment of large bowel) when he was a child. Once recovered from acute illness, his intestine should have been reconnected, but the operation was deferred for lack of funds. Or the man who carried a gigantic tumor on his back, literally like a bulging backpack, for years. Or the elderly woman who came with a facial mass, which surprisingly did not bother her as much as her other surgical problem (see photo below).

But the lady with the orthopedic fixators, who was carried by family members to the hospital during the SPSA’s (Society of Philippine Surgeons in America) most recent mission is likely the most disheartening.

Maria, a 53-year-old Filipina was struck by a motorcycle 11 years ago. She had sustained multiple fractures of both legs (tibia and fibula) which were stabilized with external fixators (see photo).

The orthopedic rods and screws were to be removed six months later when the bones would have healed but that did not happen. Thus, Maria required constant help from family members because she was practically bedridden – for 11 years! 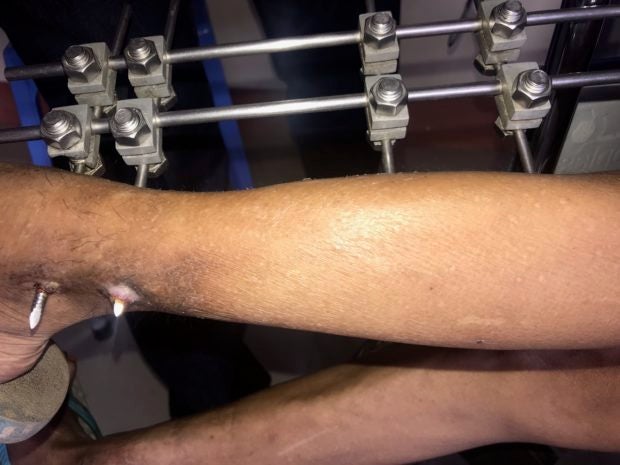 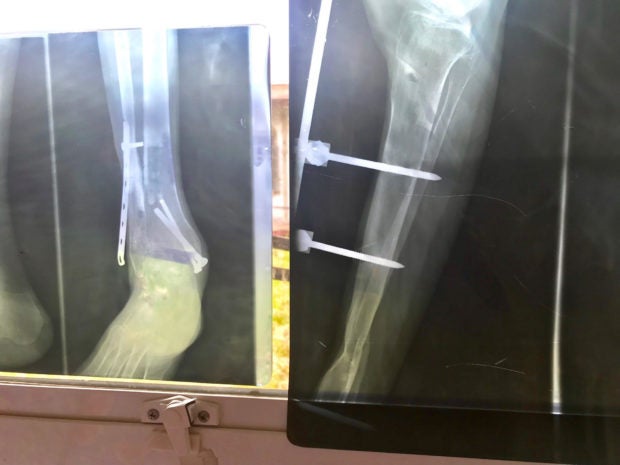 Maria’s mother told us that the culpable motorcycle driver had paid P80,000 ($1,500) for the emergency surgery and hospitalization. Thereafter, Maria was offered an additional P10,000 ($200) to settle the case. Anticipating additional surgery and physical rehabilitation, she declined. However, Maria’s husband compelled her to accept the offer. Reluctantly, she signed the settlement papers. Her husband promptly gambled away the money; then he left town, abandoning her to care for their three children.

Impoverished and emotionally spent, Maria came to see if the SPSA mission team could perhaps do something about the external fixators. SPSA orthopedic surgeon Dr. Napoleon Valdez examined her, reviewed the x-rays and scheduled the operation. With the assistance of anesthesiologist Dr. Ed Navarro, the external fixators were safely removed in less than an hour. Fortunately, there was no osteomyelitis or bone infection. ”

“Hallelujah!”an ecstatic Maria exclaimed. Dr. Valdez assured Maria and her beaming mother and daughter that, with some rehabilitation, she should regain muscle tone and walk again.

Such heartwarming stories encourage physicians and volunteers to continue organizing and carrying out medical and surgical missions. 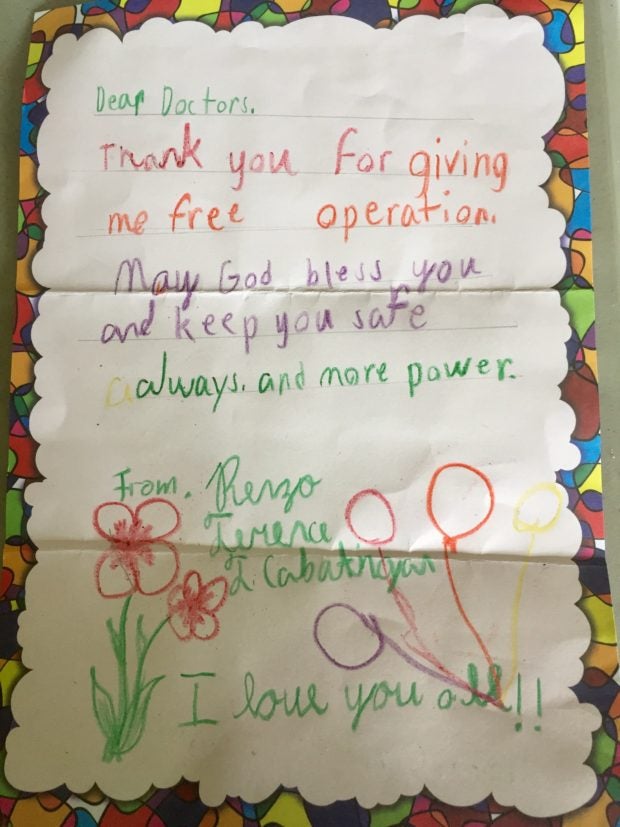 A thank-you note to the medical mission. CONTRIBUTED

Since 1992, a team comprised mainly of Filipino surgeons trained and practicing in the United States and Canada have conducted yearly surgical missions to various parts of the Philippines, from southern Cebu to as far north as Apayao. The initial SPSA surgical mission to the Philippines was coordinated by Dr. Mel Simon. Succeeding missions were directed by the late neurosurgeon, Dr. Manny Cacdac and Dr. Pacifico Dorado. The more recent projects have been directed by Dr. Eduardo Barcelona and Dr. Edward Quiros.

Every year, around January, board certified surgical specialists – general and vascular surgeons, orthopedists, eye surgeons, gynecologists, plastic and reconstructive surgeons, anesthesiologists, etc.  – and an idealistic team of dentists from Manila, bolstered by nursing as well as clerical and technical volunteers, converge for a week to provide free operations to patients who had been screened and examined by local physicians.

General and spinal anesthesia for major operations is provided by international anesthesiologists and their local Filipino colleagues while minor operations are performed with regional block or local anesthesia. The hardworking dental team from Manila treats hundreds of patients who require dental extraction and dental hygiene education.

Financed through an ongoing charity fund, the SPSA brings in surgical supplies, instruments and medicines. The local sponsors also contribute to medical supplies. 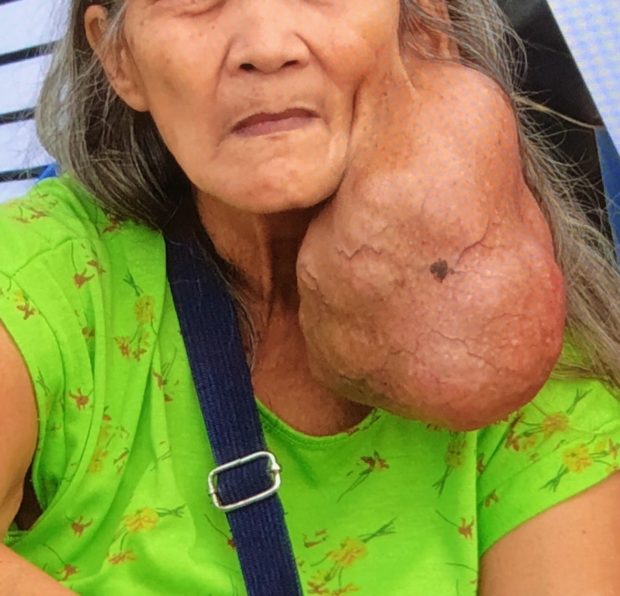 Woman with a facial mass. CONTRIBUTED

These missions are directed toward “the poorest of the poor” in urban and rural settings. Like the story of Maria and the boy with the colostomy, these patients have fallen through the cracks, unable to afford expensive surgery. Even those with some funds are often unable to have their surgery done. I recall operating on a child with a cystic hygroma, a congenital tumor of the chest and axilla. For years, the parents had approached various charitable organizations, but funds fell short.  The child awaited surgery for years until the surgical mission came to their locality.

Many outside of the medical field are not aware that restrictions have lately become onerous for medical/surgical missions, particularly in the Philippines. The intention of the government and Philippine medical authorities to vet medical missions is understandable. Regretfully, we hear of missions where postoperative surgical complications may not have been properly or promptly addressed.

However, the SPSA and other medical groups are comprised of highly trained specialists and ethical physicians. Services are provided pro bono.  International volunteers pay for their travel expenses. An advance team of surgeons survey the proposed sites prior to conducting the missions. After completion of a week-long mission, surgeons are assigned to stay behind to monitor postoperative cases. Patients are then properly endorsed for follow up by local physicians and surgeons.

Perhaps, stories like Maria’s, will lift or at least minimize undue restrictions placed on medical and surgical missions.  It would be a tragedy if the SPSA missions and similar other endeavors were terminated by burdensome restrictions imposed on such charitable projects.