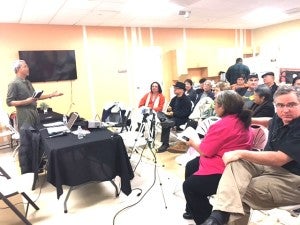 Billed as “ People and the Power of Resistance from 1986 to Today,” the event honored the peaceful toppling of dictator Ferdinand Marcos, the culmination of massive acts of civil disobedience in the Philippines from February 22-25, 1986.

California State University Northridge professor emeritus Enrique de la Cruz recalled “the arc of history” from the beginnings of Martial Law in 1972 to the EDSA revolution in 1986 and the successful struggle to remove the U.S. military bases, which was clinched by the Mt. Pinatubo eruption. 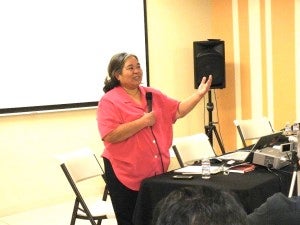 Other presenters included those who came to the United States later in the ‘90s like Myrla Baldonado and Lolit Lledo who survived the Marcos dictatorship. One of them was detained and tortured and the other’s husband was a political prisoner. 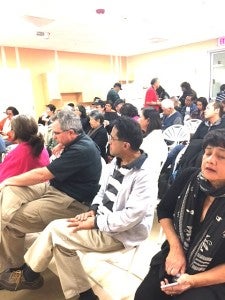 Event organizer Carol Ojeda Kimbrough, who taught cultural history at the University of Southern California and Cal State Fullerton, remembered her husband Lando Federis, one of the “disappeared” activists during martial law. She was part of the class action lawsuit filed in Hawaii on behalf of torture victims or their surviving relatives that was settled in 2011.

The speakers narrated personal stories about how they organized communities outside of the Philippines to oppose a dictatorship.

“It was not easy because we were always followed by spies and agents of the Philippine government then, every time we came from a rally or political action,” said Prosy who with her husband Enrique led the LA chapter of the National Committee for the Restoration of Civil liberties in the Philippines (NCRCLP). In a light moment, Prosy recalled, “One time instead of being scared I turned it around and followed the spy instead, and he soon disappeared.” 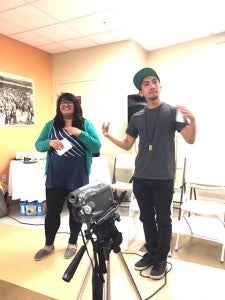 Geaga-Rosenthal who maintains her activism in local politics and the former president of the Pilipino American Los Angeles Democrats, remembered how “Marcos loyalists” participated in the community elections in an attempt of infiltrate local Filipino organizations and draw support for the regime in the Philippines.

Young activists and millennials came to detail their lives as community organizers today. Eddi Gana, Jr. And Stephanie Sajor, spoken word artists, based in Los Angeles, founded the “Sunday Jump,” an open mic series in Historic Filipinotown. They are leaders of KmB, Pro-People youth, a progressive organization that raises the next generation’s social consciousness through performances.

In the process of their advocacy, Eddi and Stephanie got married, a phenomenon that was observed as prevalent among past activists.

“We had a ‘people’s wedding’ in the ‘70s said Rose Ibanez who, with spouse Florante Ibanez, was part of the leadership of the Katipunan ng mga Demokratikong Pilipino (KDP) in LA. “A people’s wedding is when all your friends help,” Rose reminisced. Rose is a longtime city manager and Florante manages the library computer services at Loyola Law School and teaches Filipino American history. 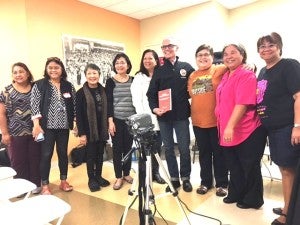 Councilmember Mitch O’Farrell of the 13th District of LA City Council came to support the celebration. He recently urged opposition to President Trump’s executive order declaring a travel ban on seven Muslim-majority nations. The 13th district includes Historic Filipino town, Echo Park, East Hollywood, Silver Lake and Hollywood. He said he was emboldened by the unity he sees among his constituents to support the campaign against the discrimination of immigrants.

“As long as there are policies that discriminate and threatens civil rights, human rights, freedom of religion and the free press, those are direct threat to everyone’s freedom,” O’Farrell said. 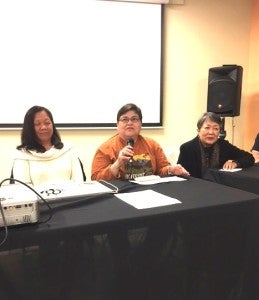 Others who spoke included Angela Bartolome founder of the organization AF3IRM. Born in the Philippines, her parents are Filipino activists. She narrated how she grew up amid anti-martial law activism and how this experience instilled in her effective organizing skills.

Art Garcia leads the Justice for Filipino American Veterans and Filipino American Human Rights advocates who are against extrajudicial killings in the Philippines and the burial of Marcos at the Libingan ng mga Bayani. His group also warns against the country’s move towards another dictatorship.

MORE STORIES
Who has the most dunks in the NBA?
NFL Playoffs – who’s predicted to go to the Super Bowl?
Pavia – a new virtual world from Cardano
Don't miss out on the latest news and information.