LA County vows to be ‘oasis of support’ for beleaguered immigrants

LA County vows to be ‘oasis of support’ for beleaguered immigrants

“We can’t afford to sit back. We have to stand up and speak,” LA County Supervisor Hilda Solis said at a media roundtable in downtown LA on Friday, Jan. 18. 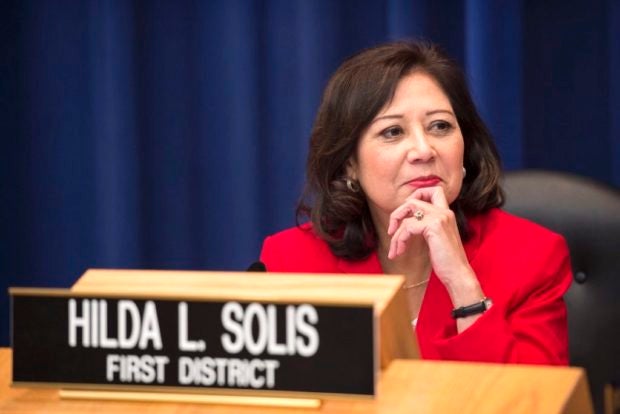 Speaking to various ethnic news media, local leaders affirmed LA County’s role as an “oasis of support” for all residents regardless of citizenship status while calling out the Trump administration for its proposals to “strip immigrants” of their rights.

Anyone who lives in LA surely knows the region’s large immigrant communities and their histories.

Rigo Reyes, executive director of the Office of Immigrant Affairs, highlighted the scope of the issue in a county as large and as diverse as LA County. The county has a higher population than that of 42 states, and 60 percent of all children have at least one parent who immigrated to the U.S.

And with the overall Asian American population swelling across the country, the Filipino immigrant population will continue to grow in the next few decades.

“It behooves us to make sure to promote the success of immigrants,” Reyes said, adding that the county’s primary goal for immigrant affairs is to guarantee services “from womb to tomb.”

Solis emphasized the injustice of the Trump administration’s decision to end the Deferred Action for Childhood Arrivals (DACA) program that granted benefits — such as work authorization and protection from deportation — to eligible undocumented youth who arrived in the United States as children.

“I, too, am a daughter of immigrants,” Solis said, citing that her parents “sought opportunities going through discrimination” not unlike many immigrant families struggling to make it in America today.

Solis said that the board of supervisors voted on 34 motions that would protect immigrants’ rights. It also established a Legal Justice fund that would provide legal counsel and representation for immigrants in court; so far, the fund has accumulated $5 million from the county and City of LA, and it is seeking another $5 million from foundations and private donors.

Roundtable panelists also clarified the status of the Public Charge policy that the Trump administration proposed in October 2018, saying that, if put into effect, it would not be “retroactive” and that eligible undocumented immigrants should still make use of the county’s public services, like Medi-Cal, Section 8 housing, food stamps and other assistance programs.

“Our message is that nothing has changed,” said Roxana Molina, chief of the county’s Department of Public Social Services. “If you are in need of cash assistance [or] medical assistance, you have the ability to get these services.”