On their own, SF cops return to PH for training exchange 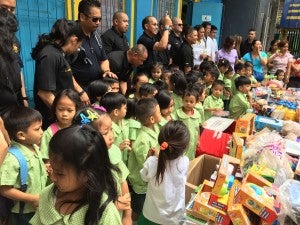 Elementary school kids are delighted by school and other materials donated by the FALEO team. At center with his hand up is retired Lt. Eric Quema. CONTRIBUTED

SAN FRANCISCO — Despite absence of official support from the San Francisco Police Department (SFPD), the annual trip to the Philippines of active and retired local law enforcers to train counterparts and do community work pushed through.

For the first time under the banner of the Filipino American Law Enforcement Officers-San Francisco (FALEO-SF), the 18-member composite team of volunteer trainers from various law enforcement agencies went on its own.

The previous Philippine Exchange Training Program (PETP) in the Philippines by Filipino American police officers had been suspended so that the San Francisco Police Department would not be associated with the Duterte administration’s bloody war on drugs. 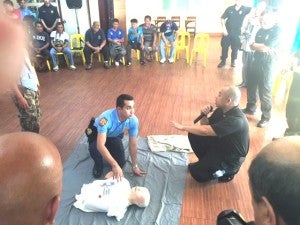 Cardiopulmonary resuscitation (CPR) training was among those given by the FALEO team in its school outreach. CONTRIBUTED

On the recent trip the FALEO team focused on teaching and guiding local youth, Bantay Bayan or barangay tanods, the Philippine National Police Academy (PNPA) as well as the National Police College (NPC) cadets and a conglomeration of various private security groups.

“Even without the blessing of the SFPD, we had a feeling of confidence in conducting this year’s exchange training program, after 17 years of fine-tuning this unique project having learned from mistakes and successes,” FALEO pioneer SFPD Lt. (ret) Eric Quema told INQUIRER.net.

“Once we met face to face with our Philippine National Police (PNP) counterparts, we had no feelings of uneasiness whatsoever despite going on with it by ourselves since our ties remained solid,” he added.

Quema also disclosed that in this year’s two-week experience, they learned that they spoke the same language as their Filipino counterparts, without the drama of politics or media hype. 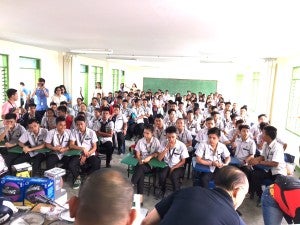 “We are here to protect and serve! That is what prevailed throughout our training,” Quema explained. “And we intend to continue this program next year, as it is the one true humanitarian issue that rises above unnecessary controversy.”

He is not too optimistic that SFPD will officially rejoin them the next time, but Quema said “it would take the active and physical participation of the top command staff to see for themselves firsthand the incredible good that is being done.” 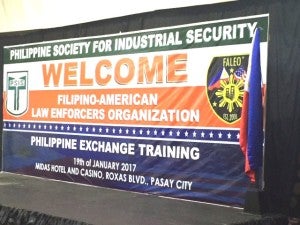 Welcome banner of the Philippine Society for Industrial Security (PSIS) to the FALEO team that conducted training at the Midas Hotel and Casino in Pasay City. CONTRIBUTED

It was also at the PNPA where they met and had lunch with Department of Interior and Local Government Secretary Ismael Sueño and PNPA cadets, among others.

The team also paid a courtesy call tp PNP chief, Gen. Ronald “Bato” dela Rosa at Camp Crame where the latter was sworn in as a FALEO member. They had a healthy discussion and even had a boodle fight lunch later. 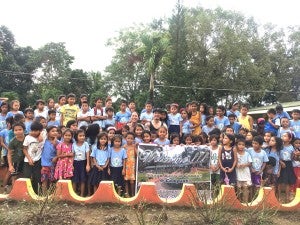 FALEO team members Shaun O’Connor (standing center with cap) and Jamie Garon (to his right) brighten up the day of Boholan children when they held lectures and training and donated school supplies. CONTRIBUTED

The team also gave a presentation-training at the Midas Hotel in Pasay City attended by some 250 officials and members of the Philippine Society for Industrial Security (PSIS).

It also held training programs for students in pre-schools, elementary and high schools in Barangays Ususan in Taguig City, Pinyahan in Quezon City and Panghulo in Malabon City. The schools were also given large volumes of material donations of new sports balls, toys, books, school supplies and computers.

Team members Shaun O’Connor and Jamie Garon had a meet and greet with local folks in Bohol province, where they also conducted basic training and distributed school and other materials to children.

“The partnership with our brothers and sisters in the PNP was a resounding success and the ties that bind remain strong and intact despite both political turmoil and mainstream American media misinformation. The global law enforcement community remains focused on law, order, preservation of life, protection of property and compassion,” a FALEO statement read.

San Francisco cops to do community work in PH instead