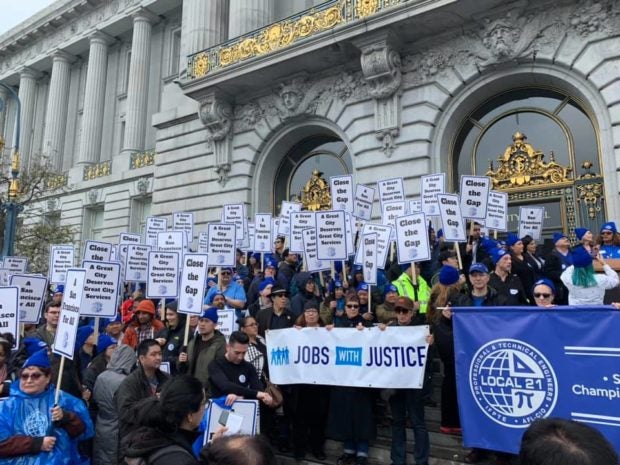 Members of International Federation of Professional Engineers (IFPTE) Local 21 rallying on steps of San Francisco City Hall, calling attention to the gap between the high cost of living in the city and their current pay. CONTRIBUTED

SAN FRANCISCO – Some 650 city employees, including many Filipinos, rallied at noon on Thursday, Jan. 17 to kick off their union’s contract negotiations with city hall and to call attention to the gap between the high-cost of living and their incomes, which they say is driving the middle class out of San Francisco.

The rallying members of the International Federation of Professional Engineers (IFPTE) Local21 represented 5,600 workers, such as architects, engineers, planners and IT professionals. Nearly 10 percent of the city workers represented are of Filipino descent; 37 percent identified as Asians and Pacific Islanders.

City Hall is negotiating 27 different contract agreements with 37 unions affecting roughly 30,000 workers before a May 15 deadline set by the City Charter.

“The City and County of San Francisco are often presented as a strong political voice on the issues of inequality that plague our national economy, but it is failing to close the gap as our city’s largest employer,” Gus Vallejo, Local 21 president, said in a statement. 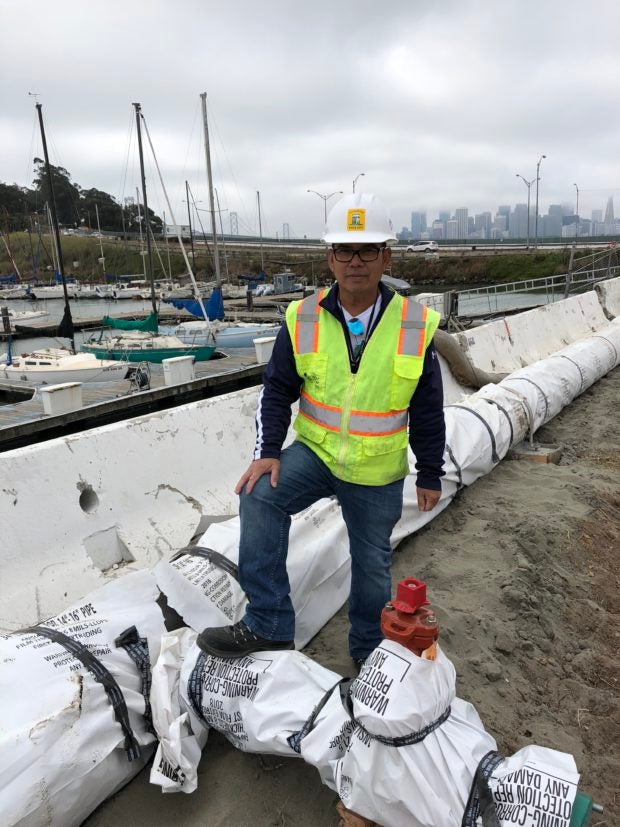 San Francisco City and County’s revenue has grown twice as it was in 2005 to $10.4 billion, but the percentage of the total budget spent on labor has dropped to 41 percent from the previous year’s 44 percent, according to the union.

A member of Local 21’s bargaining team, Marcelino “Mar” Bustos, of Daly City, said that he and other city workers are trying to catch up with the rising cost of living in San Francisco and the Bay Area.

By San Francisco standards their earnings are just slightly above the low-income threshold, added Bustos, a construction inspector at the San Francisco Public Utilities Commission and the vice president for Local 21’s Field Operations chapter.

“I moved to the U.S, because like many immigrants, I was hoping for a better life here,” said Bustos, who immigrated from San Fernando, Pampanga in 1999. “Every year I’ve lived here since 1999, things have just gotten more and more expensive. I want to retire here in the U.S. because of the medical benefits which I wouldn’t have in the Philippines, but I wonder if I can still afford to live here by the time I retire.”

Bustos added that many Filipinos city workers have been forced to leave San Francisco and move farther away elsewhere, as far as Vallejo or Hercules, just to afford housing. “I’m still lucky to be able to work and live closer to my job, but with San Francisco’s cost of living becoming more and more inaccessible, I wonder about my future.”

District 6 Supervisor Matt Haney, a union supporter, stated, “We gave so much money to the state that they gave some back to us,” referring to the $181 million windfall the city received from the state government. “Let’s invest in the people who are doing the work every day. We need to make sure that no one who works for the city is pushed out of the city because they can’t afford to be here.”