SAN FRANCISCO – San Francisco’s Presidio, the iconic former military installation that was once the embarcation point for US soldiers going to the Philippine-American War in 1898 to 1915, held the grand opening Saturday, February 25 of its new go-to-first center that tells Presidio Park goers what the 1,500-acre oasis in the heart of urban San Francisco has to offer.

“If you like history we’ve got lots of wonderful museums and historic sites. Everything you’re interested in you can find something in the Presidio and the visitor center is the place to start,” Fraser explained.

“The Presidio Center is for everyone across our diverse San Francisco area as well as around the world. Our exhibits are in multiple languages and we also have staff that speaks multiple languages because the core commitment of ours is to make sure that we are welcoming to everyone,” Fraser added.

Fraser also explained that the Presidio is actually where San Francisco started, having the oldest building in the city. El Presidio was actually built three months before Mission Dolores (founded in June 29, 1776). “We have an exhibit in that building and we would love to come and see where San Francisco really started. We also have Port Point, the historic Army Port, which is a wonderful place to come tour and we have 470 buildings on the National Registry of historic places,” said Fraser.

The Presidio transitioned from a military installation to a national park in 1994 and offers spectacular views of the Golden Gate Bridge, Marine headlands, San Francisco Bay.

Pelosi paid tribute to the Native Americans “who have been the stewards of earth of America who have been here for thousands of years,” and to the immigrants “who came to California mostly under the Golden Gate Bridge, which has been called the Western Statue of Liberty for bringing hope to so many immigrants.”

Fraser cited Pelosi, now in her 30th year in Congress, as champion of the Presidio, who worked “so hard to lead the fight to save the Presidio from being sold off to developers twenty years ago.”

Reminder of past mistakes

President and CEO of the Golden Gate National Parks Conservancy Greg Moore echoed Pelosi by noting that it the park celebrates “the many stories of the Presidio from the Buffalo soldiers, the Ohlone people, the Japanese Americans interpreters and many more. It also reminds us to not repeat mistakes that we deeply regret such as the internment of the Japanese Americans in World War II the (implementation of) which came from the Presidio.” 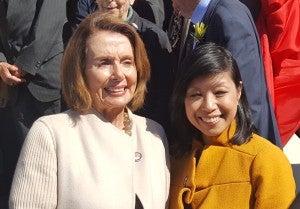 Craig Kenkel, acting general superintendent Golden Gate National Recreation Area (GGNRA), pointed out that the park maybe rich in history, “but this visitor center is all about the future.”

“The Presidio is becoming a world-class destination to welcome new audiences to a second century for the national parks. And now we even have a first-class visitor center that pays tribute to William Penn Mott,” Kenkel added.

Odette Alcazaren-Keeley, program host and Golden Gate National Parks Conservancy’s first Filipino American member of the board trustees, recalled that volunteer American troops came to the Presidio to be trained and shipped to the Philippines during the Philippine-American war in 1898-1915.

“As legal permanent residents, as citizens or whatever status we may have, we do have to play a role as voices of the immigrant population that is now under attack. And the national parks can actually play a role in this national healing, in solidarity, in coming together to make sure there is a place for families, communities and values and that all of our voices are represented,” Keeley stated.