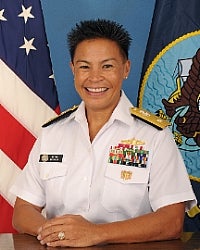 Bolivar takes over from Jackson after serving as commander of Joint Region Marianas. This will be her third such regional command.

Bolivar was born in Hawaii and raised in various locations in the Western Pacific by Filipino parents Ted Cereno Bolivar, from Camarines Sur and Virginia Dolor of Pangasinan. Cereno retired as a US Navy Chief Petty Officer.

Bolivar graduated from the U.S. Naval Academy in 1985 with a Bachelor of Science degree in oceanography. She also holds a Master of Science in management from Troy University. She has served in various leadership positions aboard five Navy ships, as well as commanding officer of Mobile Diving and Salvage Unit 1. Most recently, she served as commander of Joint Region Marianas from August 2014 to January 2017.

As commander of Navy Region Southeast, Bolivar is in charge of providing support and guidance for 18 installations within the Southeastern United States as well as the Caribbean.