I have a few Filipino friends who are federal workers. Not just TSAs, but in the office –professionals who are now wondering when their next paychecks are arriving.

I’m just sorry they don’t have a wall around our compromised president to protect them from this new thing he’s created: the payless pay period.

Zero point Zero-Zero is a triple-placeholder that does not compute as a fair wage for honest work.

My friends are hanging in there. But for candor’s sake I shall protect their identities. 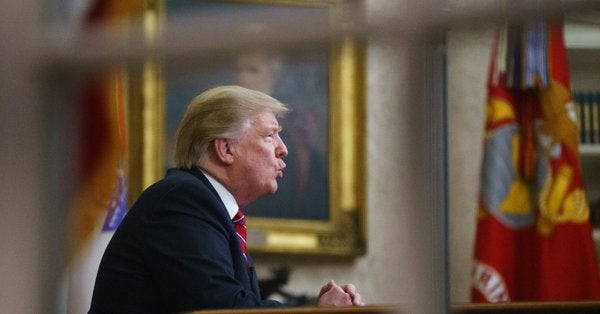 One is luckier than the other. Friend No.1’s job is with one of those departments that got appropriated in the fall. Nine other departments, like Interior, are caught in this shutdown. So, Friend No.1 has a check.  Friend No. 2 is in the latter category.

“Today was my first missed paycheck,” said No. 2. “One paycheck is doable. But I’m hoping we’ll get our next paycheck on Jan.25.”

Based on what happened Friday, I guess it’s possible. But I’d say unlikely. It presupposes President Shutdown comes to his senses.

Here’s one thing we’ve learned. It’s hard to negotiate with a congenital liar. Trump said he’d own the shutdown. Then he didn’t. He said Mexico would pay. Then he tried to weasel out of that (sorry, I should be more respectful to weasels than to compare them to a sitting truth-challenged president).

Friend No. 2, a highly educated federal worker, had this opinion of the President Shutdown’s tactics: “It’s a ridiculous way to have a policy argument! POTUS can’t get something appropriated via Congress so he shuts down the government? Apparently, he can’t win on the merits of an argument, so he has to hold the wages of 800,000 workers hostage.”

Friend No. 2 was just getting started.

“[Trump] seized on an elegant and powerful symbol during the campaign—the wall,” No.2 said. “But like Mario Cuomo said, ‘You campaign in poetry, you govern in prose.’ Trump boxed himself in with something so blunt and unworkable. Now he looks like a chump to his base for not being able to cough it up.”

Well, Trump is the least qualified person to ascend to the presidency. And we should have known from his past that something like this would happen. I mean how do you bankrupt a slam dunk like an Atlantic City casino where the house always has an edge? Only an incompetent could do that.

The way out is not looking so great, especially with every new Russia probe disclosure.

Is the president a witting or unwitting tool of the Russians? Is the President actually a Russian asset?

Patriots should be fired up that their boy could be a patsy. But Trump thinks he has his base by their racist gonads as he leverages the federal workers to push for the patriot’s fantasy—that darn border wall.

And so the stalemate continues. As everything continues to sink deeper and deeper into the New Swamp that Trump has created.

At this point, I say he’s looking for a fig leaf big enough for his ego. But who’s going to throw him one first?

Some Republicans are suggesting a fake emergency court delay that gives Trump an exit plan to open up the government and then blame the courts for not building a wall.

Others are suggesting a deal involving funding for DACA, but the same white nationalist base he’s trying to placate hates DACA more than a wall.  DACA recipients are real persons of color. The base will never go for it.

It’s hard to see anyone but the Republicans forcing Trump to be reasonable. They have leverage on Trump. Republicans need to buck up and push to re-open government for the country’s good.

Conservatives must be conflicted. They are getting to live their “No government/Small government” fantasy. Anything Republicans have done is sort of half-hearted, besides voting themselves a tax cut that will raise the U.S. Treasury Department’s estimate of the federal deficit in FY2019 to more than $1 trillion.

Republicans should be motivated to have a heart-to-heart with the man  New York Times columnist Tom Friedman  called an “ignoramus” on cable news.  GOP Rep. Tim Scott is concerned about his fellow Republicans’ silence on Iowa Congressman Steve King and his racist remarks. They all ought to be more concerned with silence over Trump.

Democrats have shown what it’s like to negotiate with a liar. But Pelosi and pals have a lot of leeway before they reach “a pox on both houses” territory. If they don’t budge–and why should they–it remains Trump’s tantrum until further notice.

And that means more pain ahead.

The longer President Shutdown remains unmovable, the more our federal workers, Asian Americans among them, are the real victims. But the federal workers are just the obvious victims.

As new details of the Russia probe come into view, we see an America slowly sinking.

Where I talk about the themes of my American Filipino story. Come see it Jan. 27, Feb. 1, and Feb. 7th in San Francisco. And if you’re not in SF, tell your friends there to come.  Or bring me to your town!

For reading this, use the special discount code:

Emil Guillermo is a journalist and commentator. He writes a column for the Inquirer’s North America bureau. Twitter @emilamok.   Find him on Apple Podcasts.