As more states introduce bills to pass full-scale legalized sports betting, the NBA wants their cut from all betting enterprises. 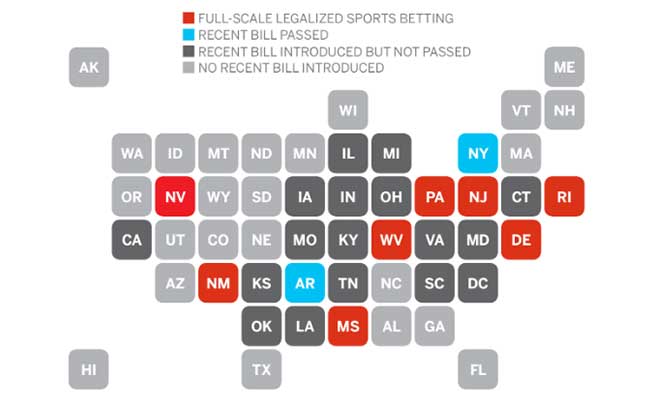 Sports betting operators are looking at the possibility of having to pony up 1% of the total amount of bets on its games to each league, NBA Senior VP and assistant general counsel Dan Spillane declared in a statement to the New York Senate Standing Committee.

“Sports leagues provide the foundation for sports betting while bearing the risks that sports betting imposes, even when regulated,” Spillane said in the statement. “Without our games and fans, there could be no sports betting. And if sports betting becomes legal in New York and other states, sports leagues will need to invest more in compliance and enforcement, including bet monitoring, investigations, and education.”

“To compensate leagues for the risk and expense created by betting and the commercial value our product creates for betting operators, we believe it is reasonable for operators to pay each league 1% of the total amount bet on its games.”

The National Basketball Association says it is entitled to a cut of sports betting money because its business would suffer from a betting scandal.

NBA Senior Vice President Dan Spillane says the league should get one-quarter of 1 percent of the total amount bet on basketball games.

Spillane says sports betting is based on the league’s product: basketball games.

Spillane was responding to a call by former New Jersey Gov. Chris Christie on Friday for states to oppose a bill that would give the federal government control of regulating sports betting.

Christie told lawmakers from gambling states they should resist so-called “integrity fees” as well as the mandatory use of official league data.

Leagues have been unsuccessful so far in getting states to agree to pay them a cut of sports betting.

Former New Jersey Gov. Chris Christie is telling states to oppose a bill that would give the federal government control over regulating sports betting.

The Republican said Friday at a conference of legislators that state have proven they can handle the job. Christie began a court battle against the major pro and college sports leagues that ended with the U.S. Supreme Court clearing the way for all 50 states to offer sports betting.

Christie also urged states to resist granting the leagues “integrity fees,” which are essentially a slice of the action on sports bets. Leagues have pushed for the fees unsuccessfully so far in the states that have legalized sports gambling.

The leagues support federal regulation of sports betting in a bill that was introduced last month.