Diokno: Fight the fear, sing our own song

Diokno: Fight the fear, sing our own song 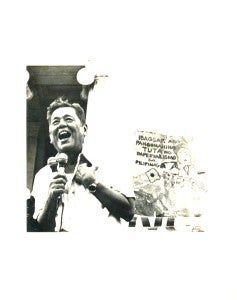 Jose Diokno was the activist-intellectual, the human rights warrior and the brilliant, fearless opponent of dictatorship we revered and respected. Ka Pepe was the hero of my generation.

This week, we mark his 95th birthday and the 30th anniversary of his death.

Amid the gloom and bitterness as the nation reels from another fascist ruler, it was a stunning surprise to read the Diokno name in the news recently.

“‘Fight the fear’ under Duterte rule, FLAG’s Diokno urges Filipinos,” read the headline in a story in the Philippine Daily Inquirer last week.

It was, of course, a different Diokno featured in the story. It was his son Jose Manuel “Chel” Diokno, now the national chairman of FLAG and dean of the De La Salle University College of Law.

I share the view of many Filipino activists of my generation who believe that any struggle for freedom and democracy must be based on collective action, not the glorification of one individual or one family.

The Dioknos believe this, too. Despite the prominent role Ka Pepe played in the defeating the dictatorship and in advancing the cause of human rights in the Philippines, the family has kept a fairly low profile since the 1980s.

I wrote about Pepe Diokno in September, on how the nation badly needs a leader like him in the age of Duterte. One of Ka Pepe’s daughters, Maia Diokno, an old friend, thanked me for it, though she said she was “embarrassed to like” the article partly because of her family’s “horror of self-promotion.”

But as the country struggles under the leadership of another Marcos, when a state-inspired bloodbath has led to the deaths of more than 6,000 Filipinos, it was inspiring to read what Chel Diokno had to say about the state of the country, and what needs to be done.

In fact, to appreciate his words, one really has to read and even watch Chel Diokno’s complete statement. The headline, “‘Fight the fear’ under Duterte rule,” doesn’t capture the complete essence of his message.

Those of us who lived through the Marcos nightmare would understand Chel Diokno’s message. Just like for many Filipinos today, the Marcos years were a time of fear. We were afraid and we had to accept that it made sense for us to be afraid.

But we also learned to tap into that fear and transform it in the fight against the regime. As one of our popular sayings back then went: “Fear is contagious, but so is courage.”

And no courage was more contagious than that shown by Pepe Diokno.

The news story about Chel Diokno quickly reminded me of “To Sing Our Own Song.” That was the 1983 BBC documentary on the Marcos dictatorship that was narrated by Pepe Diokno.

I still think it is the most compelling documentary about the Marcos years, and I encourage you all to watch it on the Diokno website.

Amid what some portray as the perversion of the country’s legal system by Duterte and his allies, Ka Pepe’s advice to young lawyers and law students during those dark years comes across as powerfully relevant today.

“Don’t ever confuse legal rights with justice,” he says during a FLAG gathering featured in the documentary. “As lawyers and as law students, our function is not only to cause respect for law, it is improve law.”

That was precisely the role he played when he joined the administration of Cory Aquino after Marcos was overthrown.

Diokno helped introduce legal reforms to better protect the civil and human rights of Filipinos in the post-Marcos era. He spearheaded the creation of the Commission on Human Rights, now led by activist Chito Gascon, and now a besieged institution under Duterte’s fascist government.

Rabid Duterte supporters will likely dismiss Ka Pepe as another “yellowtard,” a diehard supporter of Cory Aquino. Young Filipinos who are still on the fence on what to believe about that period should know this: On issues of human rights and sovereignty, Pepe Diokno took strong positions that were sharply opposed to Cory and her cohort.

By the end of his life, he had become a critic of the elitist hacendero order under Cory Aquino. He was in the hospital when farmers and their supporters were mercilessly gunned down and killed outside Malacanang in what is now known as the Mendiola Massacre.

Ka Pepe was deeply affected by the massacre on Jan. 22, 1987. “It was the only time we saw him in near tears,” Ka Pepe’s daugher Maris Diokno recalled.

Pepe Diokno died a month later, a day after his 65th birthday.

“To Sing Our Own Song” was Ka Pepe’s call to the world to support the struggle of the Filipino people against the Marcos dictatorship.

It took guts for Ka Pepe to agree to narrate the documentary, which came out when Marcos was still at the height of his power. Even watching the documentary was dangerous. Remember, this was the time before the World Wide Web and YouTube. We had to watch it secretly, usually during house meetings using Betamax machines.

“To Sing Our Own Song” is about an hour long, but you can go to the 4:00 mark of this video clip to understand the power of the documentary:

As the documentary ends, Ka Pepe looks at the camera as he denounces the repression and injustice under Marcos.

“How can such a government stay in power?” he asks. “Because powerful nations principally the United States support it. And they support it because of my country’s strategic location and the profits that their multinationals make here….

“It looks impossible for my people and people of the Third World to get out of this trap. But we will,” Ka Pepe declares. “It would be a lot easier if you of the First World were to give us your sympathy and your understanding and prevail upon your governments to stop supporting repressive governments like the one in my country.”

Then comes the part that I still like watching over and over again, for it never fails to make me feel profoundly moved and inspired by this great Filipino:

“But whether your governments do or not, I know my people, I know other Third World people. I’ve worked with them I’ve lived among them.

“Whatever your governments do, whatever our own elites and our own rulers do, and even if we have to wade through blood and fire, we will be free, we will develop. We will build our own societies. We will sing our own songs “