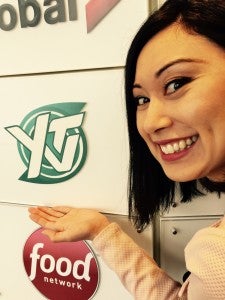 The character Pam Fontaine is one of the mainstays of “The Stanley Dynamic,” a 26-episode, half-hour live action sitcom that features a typical family (the Stanleys) with a twist–one of their twin sons is human–Larry (Charles Vandervaart) and the other, Luke (voiced by Taylor Abrahamse) is an animated cartoon.  For the Stanleys and the world around them, Luke is a regular kid living in a three-dimensional world.

Michael Barbuto is cartoonist dad Lane, who chronicles his family’s adventures in his comic strip.  Kate Hewlett plays his wife Lisa, who is the resident chef in the Brock (Brockdale Community Center).  Madison Ferguson plays Lori, the Stanleys’ youngest daughter.

Queried on how she landed the role of Pam, Jorge explains that Ken Cuperus was a staff writer on “Mr. Young,” another show where Jorge appeared.  He asked her to read for “The Stanley Dynamic” and the rest, as they say–is history. 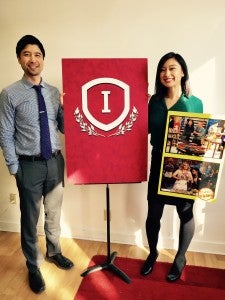 Husband Fane Tse and Josette contribute to the arts community for the youth in Toronto. Visit: www.ivyspeechartsacademy.com. INQUIRER/Marisa Roque

Cuperus is executive producer/showrunner with Michael Souther and Teza Lawrence also serving as executive producers.  Victoria Hirst is producer.  Cuperus as been nominated for a 2017 Canadian Screen Award for his writing on “The Stanley Dynamic.”

Filmed in Toronto, “The Stanley Dynamic” is produced by Amaze Film+Television Inc., in association with YTV.  Animation is produced by 9 Story Media Group.  The series is co-created by Cuperus, Jocelyn Hamilton and Jamie Piekarz.  It is distributed by Nelvana Enterprise.

Jorge honed her acting chops in Vancouver, British Columbia. “I was born in Richmond, actually,” she clarifies, this youngest daughter of Dangal (Danny) Jorge (family from Bohol and Bulacan), and Enya (Boots) Bautista (family from Baguio).  Both Josette’s mom and dad are graduates of UP (University of the Philippines). She has an older brother, Jonathan, who is in IT, and a sister, Joen, who is in human resources. 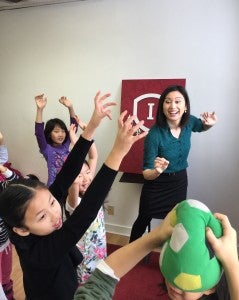 With acting students: Whoever catches the ball adds a word to a collective story. INQUIRER/Marisa Roque

Her childhood idol is Lea Salonga.  “I really looked up to her,” says Jorge, “and I took music lessons–voice and piano.  My parents always asked me to sing and play the piano for relatives.  Karaoke?  I absolutely love it,” she adds.

Performance seems to have been set as the path for Jorge, and she obtained her theater degree from Simon Fraser University. She also received a certificate as a teaching associate in speech and drama from Trinity Guide Hall in the UK.

Jorge is a Jessie Richardson Theater Award nominee for her work in Vancouver’s Solo Collective’s Play with Monsters and was the first recipient of Vancouver Asian Theater’s Walk of Fame Award, which acknowledged her work with the Asian-Canadian Theater Community.  Jorge was featured as an Actor to Watch in Georgia Straight’s Fall Arts Preview (2013). 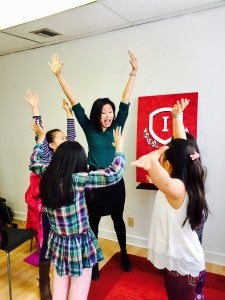 Jorge is married to Fane Tse, a fellow actor she met at an audition in Vancouver. Together, they run a school (Ivy Speech Arts Academy) for young people in Toronto.  “We teach public speaking and elocution, and it is a joy to help children develop social skills through speech arts,” she adds.

Josette Jorge advises aspiring Filipino Canadian actors and directors to keep on perfecting their craft. “Get your stories told–we need more Asian faces on screen and stage.  Pursue the arts,” she says.

Season 2 of “The Stanley Dynamic” premieres February 27, airing Monday to Friday at 6 p.m. on YTV, a Corus Entertainment Network.