Los Angeles wants to combat homelessness with more than housing 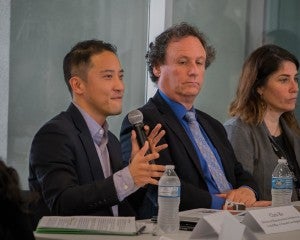 Director of Homelessness Initiatives for the United Way of Greater Los Angeles, Chris Ko (left), Director of the Los Angeles County Homeless Initiative, Phil Ansell (center), and the Director of Access, Referral and Engagement for the Housing for Health Program, Libby Boyce, outline the scope of LA’s homelessness crisis and how Measure H will seek to address it during a press conference hosted by New America Media on Friday, February 3. NAM/Eric Licas

LOS ANGELES – At 19, Reba Stevens was caring for an elderly woman in exchange for housing. But when the homeowner died, Stevens, a single mother, was left with nowhere to go. Leaving her two-year-old daughter with relatives, she went on to spend the next 21 years on the streets of Los Angeles, in and out of homelessness.

Stevens eventually turned to drugs and alcohol in order to escape despair. She would often seek refuge and anonymity by aimlessly riding public transit, and resorted to shoplifting so that she could feed herself as she cycled through abusive relationships, shelters and jail cells.

“I lost me,” says Stevens. “Homeless is a very scary place to be.”

Repeated petty theft arrests led to a court-ordered visit with mental health professionals, who diagnosed Stevens with post-traumatic stress disorder and major depression. She says that without their services and guidance, she might never have found the hope she needed to begin building a life that would keep her off the streets.

More than food and shelter

People struggling with homelessness need access to more than food and shelter, according to Stevens. She says Los Angeles County’s Measure H, a proposal for a countywide sales tax increase of a quarter-cent to fund services for the poor, will address many of the underlying circumstances that perpetuate what officials in Los Angeles have a called a homelessness crisis.

“Homelessness is something where we have the cure, and we just need to figure out how to administer that,” says Chris Ko, the Director of Homelessness Initiatives for the United Way of Greater Los Angeles.

The number of people living on the street in Los Angeles rose from some 39,500 in 2013 to more than 44,300 in 2015, an increase of 12 percent, according to a report by the Los Angeles Homeless Services Authority (LAHSA).

And homelessness affects all communities, according to Ko. About 750 Asian Americans and Pacific Islanders in the city currently struggle to find shelter on a day to day basis, and many more live on “the brink of homelessness.”

According to research by Enterprise, a nonprofit advocating for affordable housing, AAPIs represent five percent, or over 900,000, of the 19 million housing insecure families nationwide. In Los Angeles, nearly 45,000 AAPIs live in a state of housing insecurity.

And while the county is making progress, it needs more dedicated funding. “It is impossible for the County of Los Angeles to address the ongoing need for funding to combat homelessness within its own existing resources,” says Phil Ansell, the director of the County’s Homeless Initiative. “Most of the strategies that will be funded with Measure H revenue are well beyond the scope of the County’s statutory responsibilities.”

The money generated by Measure H will go toward projects that will help identify and support those in danger of becoming homeless, in addition to efforts to house and care for those already living on the street. Many of these programs, like multilingual outreach campaigns and specialized services for veterans and victims of domestic abuse, seek to deliver aid to those people with unique needs who might be especially at risk.

The proposal would work in conjunction with Measure HHH, which won overwhelming support from voters during the November election. The previously approved measure permits the city to finance up to $1.2 billion in bonds to pay for new housing as well as mental health and addiction treatment centers for the homeless.

Proponents of both measures say they will save the city money in the long run. They cite research that suggests it is more cost effective for communities to provide people living on the streets with housing, along with preventative and holistic care, than it is to keep up with the medical and legal fees that accumulate as a consequence of homelessness.

“They’re already paying for [homelessness] today in the hospital system, in the jail system, in the mental health psych wards,” says Ko. “We can be cheaper and more proactive and humane about it, or we can be more expensive, reactive and kind of punishing.”

Some opponents of increased spending on homelessness issues have said that existing funds ought to be used more efficiently and have doubted whether or not simply giving more money will solve the problem.

However, LAHSA estimates that programs which provide support to the unsheltered in Los Angeles face a $450 million shortfall each year. Measure H would address that gap by generating a projected $355 million in tax revenue annually.

Ko concedes that many the city’s efforts to eradicate homelessness could benefit from cost-saving analysis.

However, he says, “Right now, we spend about $25 million to $50 million a year, so … literally everyone [in the homeless population] receives only a fraction of the services they need. Resources do matter and save lives.”
In order to pass, Measure H must receive approval from at least two-thirds of Angelenos voting in the upcoming municipal election on March 7.