Did the Warriors or Stephen Curry get sucked into “James Harden’s MVP talks”?

Both Stephen Curry and James Harden were drafted in 2009. Stephen Curry is a two-time MVP and a three-time NBA champion even though Harden rallied Rockets in OT to edge Warriors Thursday night.  Regardless of a regular season loss. Stephen Curry is still a runner up in MVP talks. but let’s get the facts straight, but was James Harden on another planet or what? with his step back dagger 3 closing out the warriors. None of that can discredit the back to back champs.

OAKLAND, California — A defender on either side of him, James Harden let it fly one last time for an improbable game-winner in the waning seconds of overtime before falling backward and hitting the floor.

It took his second triple-double of the week, fifth straight 40-point performance and sheer will to rally the Houston Rockets past the Golden State Warriors 135-134 in a thriller between Western Conference powers Thursday night for their sixth straight victory. 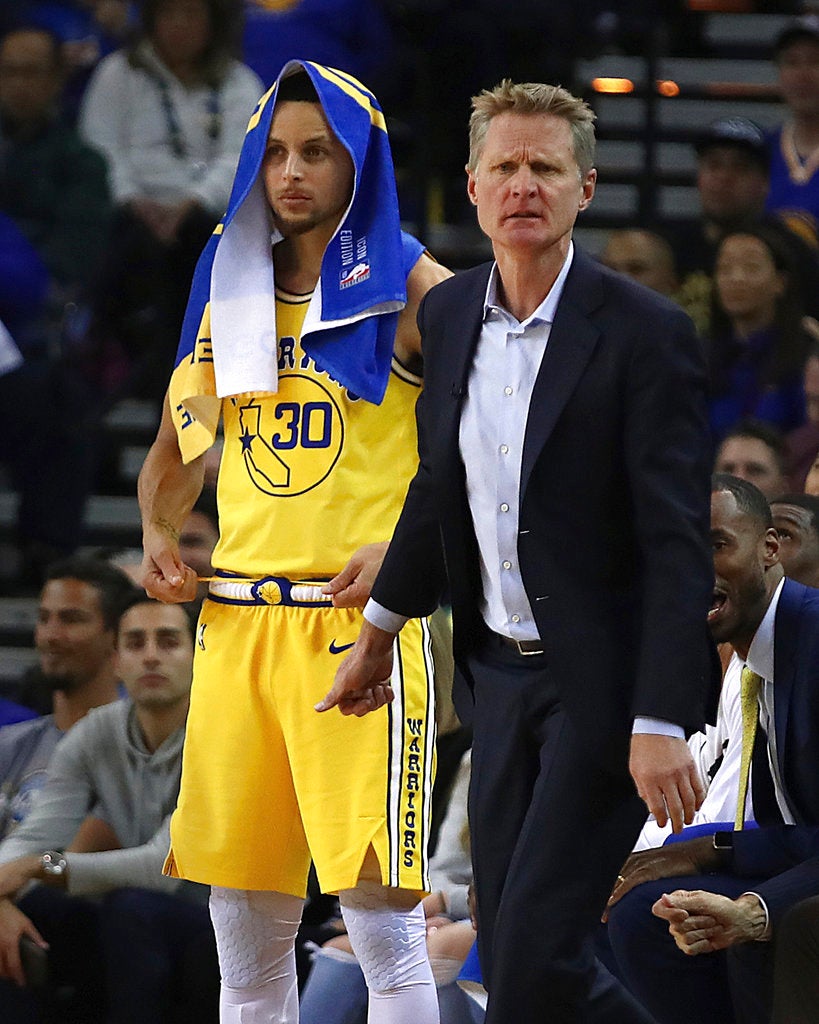 Golden State Warriors’ Stephen Curry, left, and coach Steve Kerr watch from the sideline during the first half of the team’s NBA basketball game against the Houston Rockets on Thursday, Jan. 3, 2019, in Oakland, Calif. (AP Photo/Ben Margot)

Harden hit a contested 3-pointer with 2.7 seconds left in OT and finished with 44 points, 15 assists and 10 rebounds. The reigning MVP’s team had trailed by 20.

“I take my shots, I drive to the basket,” Harden said. “I shoot my step-backs with confidence and live with the results.”

Kevin Durant’s long 3-pointer missed as the buzzer sounded in what will go down as one of the best games this regular season — a rematch of the seven-game Western Conference finals won by two-time defending champion Golden State.

Stephen Curry put the Warriors ahead with 23.1 seconds remaining in OT on the way to 35 points, a basket that shouldn’t have counted because Durant was clearly out of bounds when he flung the ball back in.

Durant said he knew it, too, and “I could believe it because the refs were missing a lot tonight.”

Harden, however, had one more incredible, acrobatic moment still in him. He released the ball swarmed by two defenders — Klay Thompson to his left and Draymond Green in front of him.

Harden also hit 3-pointers at the 3:52 and 2:02 marks of OT in a game featuring dazzling displays on both ends by some of the game’s biggest stars.

“I don’t know where it ranks but I’m just happy to come away with the win,” Harden said. “I just had to go out and do my part on the highest level.”

Thompson made a go-ahead layup with 40.6 seconds left in the extra period, then Harden tied it at 132 on a pair of free throws with 33.5 seconds left.

“He just did what he does,” Warriors coach Steve Kerr said. “He’s the master of the isolation, the step-back 3 and drawing fouls.”

Harden also had a triple-double Monday against Memphis of 43 points, 10 rebounds and 13 assists, but he was disappointed with nine turnovers he thought gave the Grizzlies too many transition opportunities.

Including his 50-point game Dec. 13 against the Lakers, Harden has scored at least 30 in 11 straight.

Kerr’s simple message about defending Harden, who went to the line 27 times Monday: “Don’t foul him!”

Harden shot five free throws in the first quarter Thursday and nine in all.

His jumper with 5:37 left in regulation cut Golden State’s lead to 112-111. He also got the Rockets close by knocking down two 3-pointers and assisting on another basket in the final 1:26 of the third as Houston cut its deficit to 98-92 going into the final quarter.

“We had a 20-point lead and lost. It doesn’t really matter what happened at that point,” Green said.

Thompson scored 26 points and hit consecutive 3-pointers late in the first half. After struggling to find his stroke from deep, Thompson is 10 for 17 on 3-pointers the past three games.

With his first 3 at the 7-minute mark of the opening period, Durant became the 32nd player in NBA history to reach 22,000 points.

Falling backward as he released the ball over Harden, Durant swished a 3 with 59.2 seconds left in the first half.

The cold-shooting Rockets fell behind 70-53 at halftime. Houston was just 6 of 23 from long range, 3 for 9 by Harden, while the Warriors shot 62.8 percent.

“I don’t think we played with that killer instinct in the second half,” Thompson said. “I think we relaxed up 17 points.”