We Compare Laptops: Which MacBook Should You Actually Buy?

We Compare Laptops: Which MacBook Should You Actually Buy?

Let us assume that you are a die-hard Apple fan, so much that you are uninterested that Windows and Chrome OS laptops are much cheaper and just as well designed as the Apple ones; and you are shopping for a laptop. I am a declared supporter of your Apple fanaticism and have been one for over 20 years now, and I agree that you should spend some more money to get a quality laptop with awesome OS and top-notch hardware. That being said, we compare laptops and tell you which MacBook should you buy. I have a simple answer to the above question: The MacBook Pro with Touch Bar. Presently, it is the only 13-inch laptop existing with Intel’s new HK-series of CPUs, making it the fastest 13-inch laptop in the market. It has a battery life of 10 hours, 4 Thunderbolt 3 ports, a gorgeous Retina display with a 2560 by 1600 resolution and the wider DCI-P3 color gamut that offers a wider range of yellows, reds, and greens than the more common sRGB gamut. The Pro is just simply amazing.

The starting price of the Pro is $1,800. Not many people can afford this because this is a huge amount of money.

If you are on a budget and you wish to buy an Apple, it might be more difficult than you think. Presently, here are four Apple laptops that go for about $1,300 or less. While they all have their advantages and disadvantages but making the right choice can be a problem when you consider the fact that Apple does not update their laptops with new CPU releases from Intel. That is why you see some laptops having different price with the same CPU within them, even though they are years apart. Sometimes, you even find that the more expensive laptop has an older system within it. For most people though, the MacBook Air would be the best option.

We just recently reviewed the new Air, which has a starting price of $1,200, an amount I think is too much, although you can find it on sale at $1,000, a price that matches its quality. However, since I just wrote a review bashing the new Air, let us do a little MacBook comparison with some of its competitors in the sub-$1,300 MacBook range so that you do not get confused on which MacBook to buy and end up regretting your purchase. 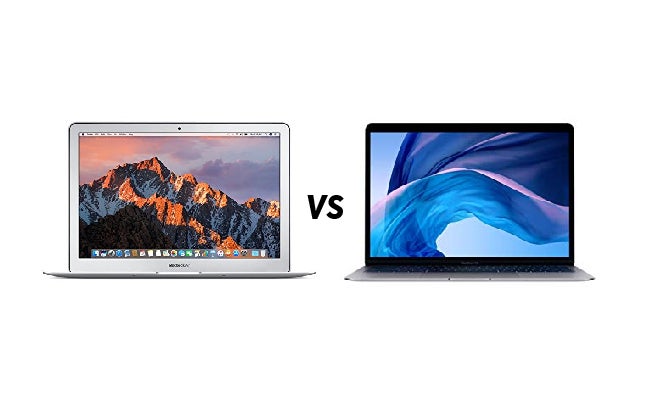 The old Air vs new Air

You can still get the old MacBook Air for $1,000. It has a nicer keyboard, USB-A ports, and a built-in SD card reader compared to the new one, as well as a 5th-generation U-series processor from 2015 in it, making it very slow. Another annoying thing is the 1400 by 900 13.3 inch display it has. It is nowhere near as bright or colourful as the new Air’s display, and it cannot produce the same kind of detail. The old Air is also heavier, weighing 2.96 pounds against the new Air’s 2.75, as well as an additional .07 inches in thickness.

Also contained in the new one is a Retina display with a 2560 by 1600 resolution, a much larger touchpad, two Thunderbolt 3 ports which can accept anything from SD card readers to external GPUs and a power button that doubles as a Touch ID sensor powered by Apple’s T2 processor which allows you to store your biometric data without the fear of people hacking it (which would have been totally possible if the laptop’s primary CPU handled the authentication).

Without question, you should buy the new Air. 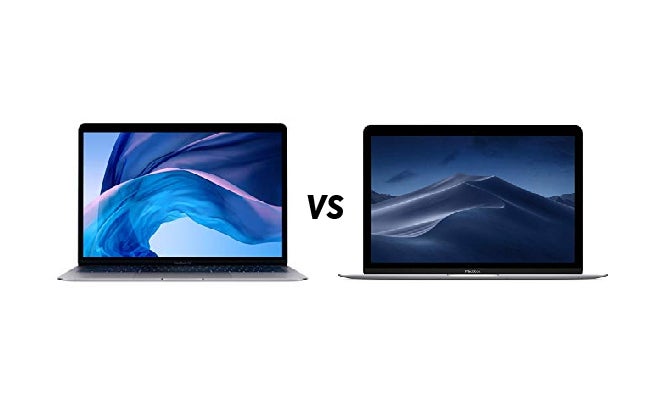 The New Air versus MacBook

With the relaunch of the MacBook in 2015 by Apple, everyone thought the Air was going to be replaced. The MacBook looked smaller and cheaper. It is still smaller and lighter than the Air, weighing 2.03 pounds compared to Air’s 2.75, but its starting price of $1,300 makes it more expensive than the Air.

So why spend an extra $100 on the MacBook? The MacBook come with about 256GB SSD at that price, something you’d have to spend $1,400 to get in any Air. Unfortunately, that’s as far as the benefits go.

The MacBook contains a 12-inch 2304 by 1440 Retina display and a 7th-Gen, not 8th-Gen, Y-series processor, and this means your work is limited by small screen and slow speed. Also, the Air has two Thunderbolt 3 ports while the MacBook has only a single USB-C port with no Touch ID.

Unless size is the only critical factor in your MacBook comparison or whenever you compare laptops, you should select the Air. 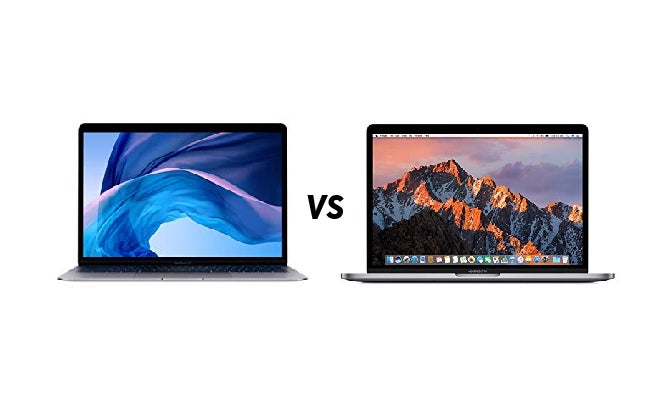 The New Air versus MacBook Pro without Touch Bar

The features of the two of them are similar in that you get the same 128GB of storage and two Thunderbolt 3 ports, as well as a Retina display with a 2560 by 1600 resolution. However, the Pro supports the wider DCI-P3 color gamut, and even though its CPU is from 2017, it’s a U-series CPU, which tends to be faster than the Y-series.

Although we haven’t tested the 2017 model, the 2016 version is very similar in comparison to the Air and has an hour and half extra on its battery life. We also believe that the 2017 version has an even longer battery life, and more speed.

This cool benefits in the MacBook Pro does come with some disadvantages though. The Pro is much heavier (3.02 pounds) and its keyboard is also more susceptible to dust and crumbs than the Air’s keyboard, since it is the previous year version. In addition, there is no Touch ID.

With all these said, if you are more interested in portability and security, take the Air. However, if battery life and performance are important to you, go for the MacBook Pro.

Better still, save up (if you can) to get the MacBook Pro with a Touch Bar. It is an awesome laptop.