For immigrant family, America was the right choice

For immigrant family, America was the right choice 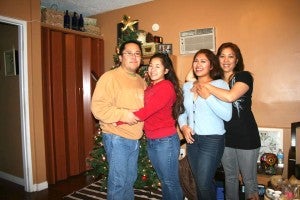 Getting out of their comfort zones, looking for more opportunities for their children and trying to find out why many Filipinos are choosing America over all other nations in the world were among the reasons young Filipino couple Rafael and Rachel Jimenez left the Philippines in 2001. Their two daughters, Brigette, was seven and Basille was five at the time.

“Living in the United States was really Rachel’s dream since she was a child. I just supported her, and I know she would support me too,” Rafael says.

Rafael had worked in sales and marketing at Goodyear Tire and Rubber Company while Rachel was an HR manager at Superior Maintenance Services in the Philippines. Both were making enough money, but the “American Dream” beckoned, and it was in the form of a friend’s recommendation.

A property management company in Los Angeles was looking for a skilled human resource employee. Fortunately, a friend highly recommended Rachel after seeing her impressive resume.

The company urged Rachel to apply for an H-1visa (working visa) with the whole family as dependents. The whole process took less than six months. By December 2001, the Jimenez family spent its first Christmas in Los Angeles, California.

Homesickness struck Rafael immediately. He missed Philippine mango, chicharon and the usual after-office drinking sessions in a nearby “sari-sari” store. He admits that until now he misses those things.

After a few years, while their kids were in school, Rafael took accounting lessons in a community college while Rachel took social work courses. Rafael is in the property management industry in Van Nuys as a staff accountant/accounting manager. Rachel now works in a skilled nursing facility in Studio City where she is currently a social work director.

The Jimenez siblings had grown up with nannies and helpers in the Philippines. In Los Angeles, they have had to do everything by themselves to get through the day.

“It was a reality check for us. In the Philippines, after a day’s work, we would just sit in front of the TV and food would be served by the household help,” Rafael recounts.

However, Rachel and Rafael found out later that being independent was an advantage for their children.

“They learned everything–washing, cleaning and operating the microwave. They are on their own most of the time. I think this kind of independence also taught them to speak their minds,” Rafael shares. 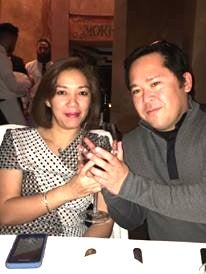 Keeping the faith in God and being faithful to family are the Jimenezes’ keys to success and survival. CONTRIBUTED

Raising kids in Los Angeles is a challenge. Rafael believes that the children’s exposure to the diverse cultures in school and community makes them tend to forget “who they are” and “their own set of values from the home country.”

“Oftentimes, a normal conversation would lead to arguments. All the values and traditions and, yes, even the ‘fabricated values’ we grew up with, we try to impart to them,” Rafael explains.

They speak Tagalog at home. Rafael and Rachel even scold them in Tagalog, but the kids would just nod and smile. Oftentimes, his daughters correct his English pronunciations. He does not take it as a sign of disrespect, instead he realizes that their children are now well adjusted to the American culture.

Filipino restaurants and groceries also play part in raising the Jimenez kids. The couple brings the kids to famous Filipino fast food chains to give them a taste of home.

In 2008 the family became American citizens.

“For me, it was a feeling of accomplishment and relief. Finally, we are now really part of America. Most importantly, we can vote and our voices are heard,” relates Rafael.

Having a different passport has advantages, which includes not queuing at the long line of immigrants from other countries at the airport. 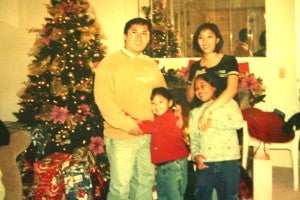 The Jimenez family during their first Christmas in the United States in 2001. CONTRIBUTED

Rafael says that the value of money is also greater in the United States compared with the Philippines.

“We can go to Disneyland anytime. Seriously, even the minimum wage-earners here can buy cars, houses and the basic necessities,” Rafael laughs.

Brigette is currently in Florida at a US Navy Boot Camp while Basille is in third year studying speech therapy at Cal State University in Northridge, just a 20-minute drive from their home.

For Rafael and Rachel, surviving in any country all depends on the perspectives of an individual. Despite misunderstandings, they rely on each other. Life in America is too fast-paced for dramas to be shared with other people. They do not let work interfere in their family. They work hard for better a life; hence, they always find time to enjoy the fruits of their labor with their children.

“Faith in God, faith in yourself, being faithful to your family and of course, put humor in your everyday life. These will surely help you succeed anywhere,” Rafael says.