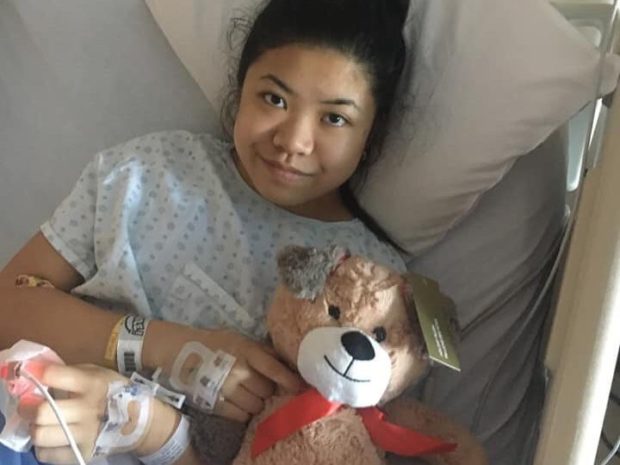 Roshlind Mance has fortunately found a stem cell donor match for a transplant that could cure her rare disease. CONTRIBUTED

“That was very good news for the family,” Joel Sanjuan, who helped organize a Winnipeg drive to try to find a compatible donor for his niece, told the Winnipeg Sun. “It was such a great thing. We weren’t expecting it although we were still hoping that we were going to find someone pretty soon but not this soon.”

Mance suddenly became ill while attending a summer school class in Calgary in July. She was diagnosed with aplastic anemia and paroxysmal nocturnal hemoglobinuria (PNH), both life-threatening diseases requiring twice-weekly blood transfusions and putting her at a high risk for infections and uncontrolled bleeding.

“It’s not a perfect match,” said Sanjuan. “It’s a nine out of 10 match so it’s close. Now the transplant team at the Alberta Children’s Hospital is going to go ahead and begin treatments.” Treatments are expected to begin early next month.

When Mance’s family in October issued a call to Winnipeg’s Filipino community to get tested in hopes of finding a donor with the matching stem, more than 500 new registrants from Winnipeg were tested and added to the registry of One Match Stem Cell and Marrow network by early November. Similar drives were held in Calgary, Edmonton and Vancouver.

Complicating matters for the search for a donor was the fact that Roshlind required a match from her own ethnic group.

According to Sarah Jasmins, Canadian Blood Services stem cell territory manager for Western Canada, there are currently over 400,000 registered in their data base, but less than 1% are people of Filipino descent.

Anyone under the age of 60 still interested in joining the donor registry can contact Canadian Blood Services or register online at http://www.blood.ca.