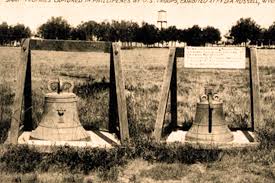 NEW YORK—The bells are back!

This Christmas the townspeople of Balangiga, Samar, truly have cause to celebrate.  After an absence of 117 years, the town’s three church bells, stolen by the U.S. military during the 1899 Philippine-American War, were air-shipped to Manila on December 11, then on to Balangiga three days later.

Once more, these bells will ring out, full-throated, to mark the town’s festive and mournful occasions.

I had little hope that the bells would ever be lodged once again in the belfry of the San Lorenzo de Martir church. I knew that repeated claims to have the war booty returned to its rightful owners have been made over the years, the earliest at least a little more than 50 years ago, when the late Jesuit historian, Fr. Horacio de la Costa of Ateneo de Manila University, wrote a letter to the Thirteenth Air Force’s command historian Chip Wards at Clark Air Force Base, declaring that the bells should be returned to the Philippines.

Until fairly recently, the lawmakers of Wyoming, a staunch Republican state, and war veterans had opposed the move. To them, the church bells were war trophies. Their justification?

On the morning of September 28, 1901, one of the three bells tolled—and the toll was horrific.

It signaled local Filipino revolutionaries, dressed as women, with their bolos hidden under their voluminous skirts, to ambush Company C of the 9th U.S. Infantry Regiment as its 78 members were having breakfast.

Forty-eight were killed, 22 wounded, four escaped, and four went missing. The locals lost between 20 to 25 men but gathered about 100 rifles and 25,000 rounds of ammunition. 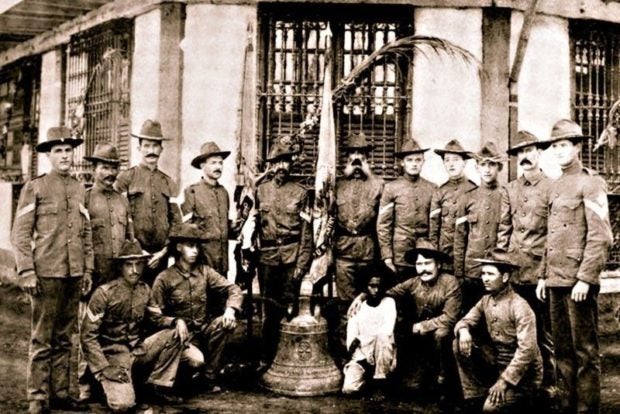 The bells were treated as war trophy

Exacting revenge and wishing that Samar become a “howling wilderness,” General Jacob Smith commanded his men to gun down any Filipino male above ten years of age. The church bells were subsequently seized and transported to the States. The general and his aide-de-camp, Major Littleton Waller, were later court-martialed for atrocities committed against the islanders. Only the general was found guilty. His punishment? An admonition and forced retirement. The public however viewed him as a hero. In keeping with the bigoted and popular views of the time the dead were viewed as less than human, as savages. Charges against Smith were later dropped.

One of many individuals who worked behind the scenes to have the Balangiga bells returned is R. Sonny Sampayan-Sampayan, a U.S. Air Force veteran. (He also happens to be the grand nephew of the late Carlos Bulosan, author of the immigrant classic America Is in the Heart.)

Sampayan has written about the efforts to reclaim the bells, in The FilAm, an Inquirer.net news partner, self-described as a magazine “for Filipinos in New York” (https://thefilam.net/archives/29003) and his role in it, specifically as Special Envoy of the Diocese of Borongan, which encompasses the parish of Balangiga. By 2018, resistance to the return had all but disappeared.

According to Sampayan, Congress directed “Secretary of Defense James Mattis to return the bells if certain pre-conditions were met. By this time, several groups of people working independently of each other had been coordinating with top-level officials for the return. They had access to high-level officials of the U.S. government and funds available to pay for the required cost. We didn’t coordinate with them, they didn’t coordinate with us.

“On November 14, Mattis announced the return of the Balangiga bells to the Philippines in a ceremony at Warren Air Force Base. I credit Mattis, Dr. Joseph Felter, who is his Deputy Assistant Secretary of Defense for Southeast Asia. I also credit [Philippine Defense] Secretary Lorenzana and members of the U.S.-Philippines Society for the turn of events.”

His account ends with this touching note: “One month later, my wife Edith and I visited the tomb of Company C Commander Capt. Thomas Connell at West Point. The Roman Catholic faith is a forgiving institution. As a Special Envoy of the Diocese of Borongan, it is my duty to forgive those who were involved in the Balangiga incident.”

The Balangiga episode figures prominently in Gina Apostol’s latest novel, Insurrecto.  Company C’s enlisted men and their officers are among the myriad characters in her compelling, time-traveling narrative that blends fiction with history. (To be continued)