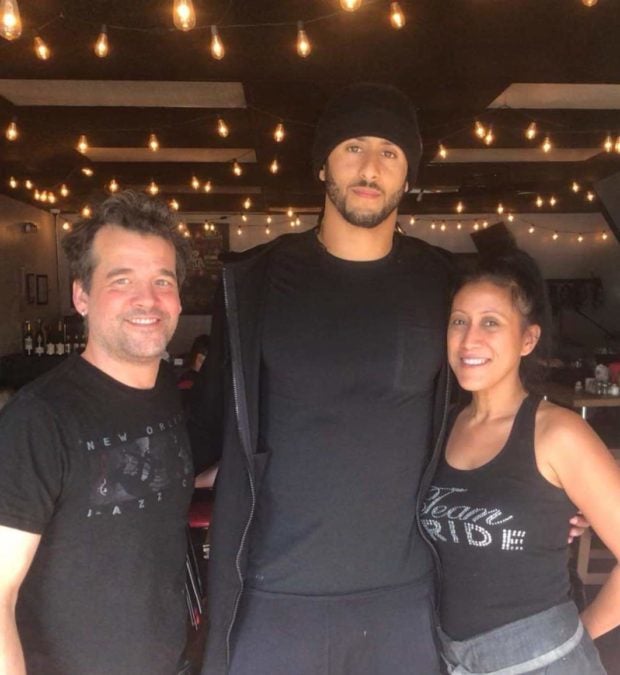 DALY CITY, California — Where Filipinos thrive, so do restaurants offering the typical and familiar. That’s why Filipino restaurants are everywhere in the San Francisco Bay Area. More often than not these serve up the greatest hits or traditional dishes high in calories, dripping in fat, and focused on meat, leaving the health–or ethics–conscious looking longingly elsewhere.

And then there’s Nick’s Kitchen, perhaps the only Filipino restaurant by the Bay that prides itself as herbivorean.

Owners Reina Montenegro and Kenny Annis promise their food is “100 % plant-based” and reminiscent of their favorite meals as children but minus the usual ingredients.

Yes, both are vegans. This kamayan spread at Nick’s Kitchen is all plant-based. CONTRIBUTED

Philippines-born Reina confesses to having been a lifelong pork-eater who learned to cook watching her grandmother Irene Montenegro in their ancestral hometown Dumaguete City. Reina’s life partner Kenny was vegetarian when they first met and dated. Eventually their tastes melded, opening their consciousness, prodding them to eliminate animal products from their diet.

Nick’s Kitchen, which entered their lives four years ago, evolved with them.

“I was a corporate caterer in San Francisco and Kenny owned his own construction company,” Reina, a computer science grad from Silliman University, told this writer about her serendipity. “We turned vegan four years ago and I was in need of a kitchen as a caterer. I used to eat at Nick’s and the owners knew me. They had decided to retire and offered me the restaurant. I said no at first and decided to do it and take the leap.” 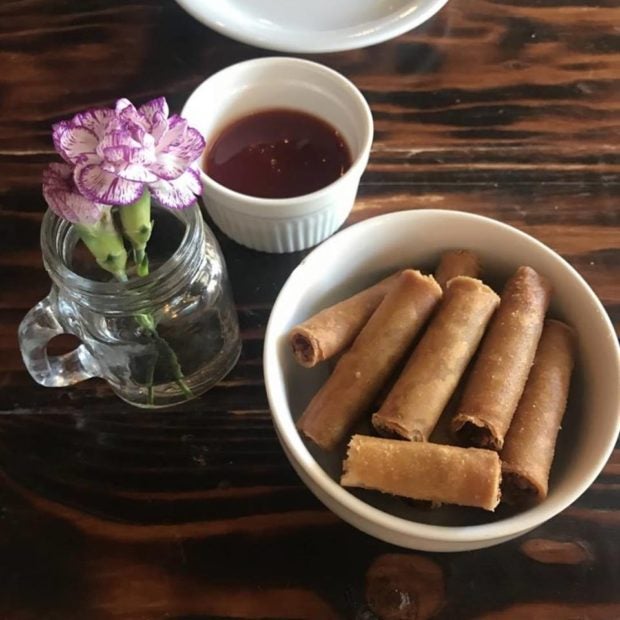 In the beginning, their menu starred meaty entrees. But plates stayed shelved.

“It was failing for many reasons,” Reina said. “One was that our hearts were not in it. And for me as a chef, I couldn’t eat anything we offered. We continued it as a meat-serving restaurant because we were worried that people would stop coming.”

They had to come up with a solution quick.

“Kenny finally said, ‘you know what, either you change it to vegan or close it.’ So after going back and forth, we closed for a week, saged the place, changed the equipment, did some minor upgrades and opened September 1 of last year.”

Touting the new all-plant-based menu, the restaurant lured a neglected sector of foodies.  The unexpected response floored the dauntless entrepreneurs. 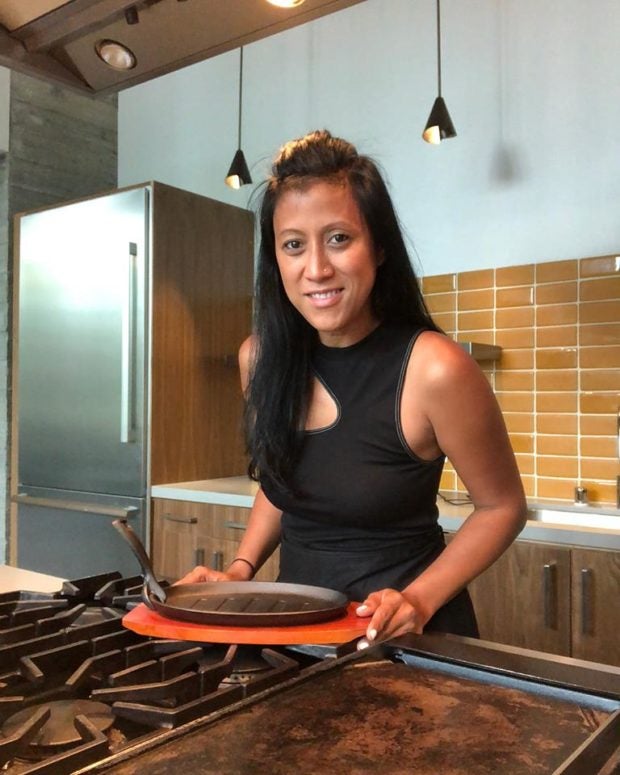 “It exploded,” Reina recalled the dramatic turnaround. “We were so busy we couldn’t keep up with the demand. It was insane — the support we got from vegans and non-vegans. It was so successful, we opened a second location in less than a year.”

Consider the marquee items in most Filipino restaurants vegans and vegetarians eschew by choice or by doctor’s orders: Sisig. Lechon Kawali. Kare- Kare. Tapsilog. Caldereta. In Montenegro’s hands these are reincarnated cruelty-free, to use a vegan principle.  Even their beer and wines are certified vegan.

Reina is her own R&D department, replicating recipes to cater to her target clientele.

“I tried to make dinuguan one time just because someone asked, but it’s really not my favorite” she admitted. “I am proudest of the Lumpia Shanghai, Leche Flan and Ube ice cream. Just because it took months to perfect. The taste I can nail down quickly, but the texture– being vegan, is tricky. Once we get it, its gold!” 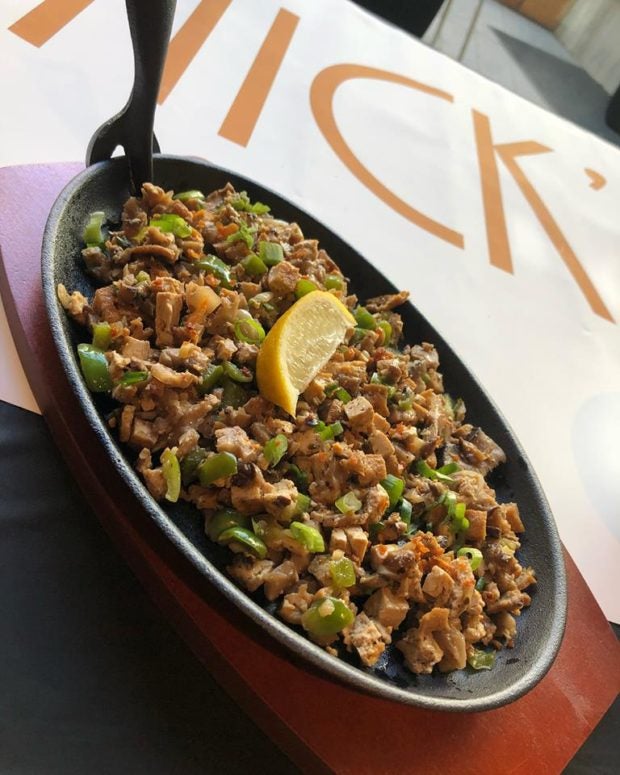 They knew they hit a veritable mine when ex-San Francisco 49er Colin Kaepernick, who launched the silent protest against police brutality by kneeling rather than standing during the national anthem, comes by to quench his vegan cravings.

Quite a feat for someone without formal training in business or culinary arts but honed an “interest in cooking by watching my grandma since I was nine years old, creating dishes and seeing how people react to it.”

Grandma was faithful to recipes from the old country, of course. But going meatless sprang from necessity rather than a business model.

“We turned vegan because of a skin issue that Kenny had for 30 years,” Reina explained. “We’ve gone to doctors and did the elimination diet and nothing worked. We thought it was gluten but when he would have cheese, he would break out. One night I came across videos on YouTube about dairy and how it has a direct effect on skin issues and so I told Kenny ‘I bet you its dairy.’” 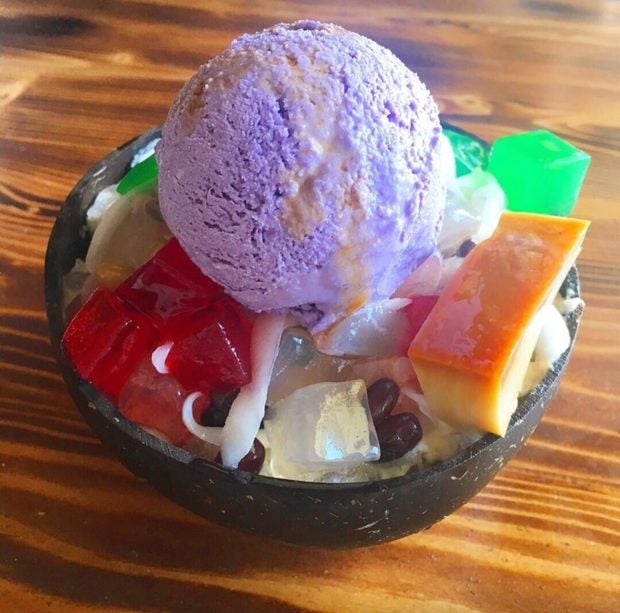 “Within two days, that awful thing went away. We are total believers (in veganism) and we both converted immediately. Kenny had been vegetarian for 30 years before we met, so ethics was a factor for him. But for me growing up Filipino, I didn’t make the connection. Filipinos are heavy meat-eating people.”

Their restaurant menu reflects their values.

“After a few months of becoming vegan, something switched and clicked and I realized how awful it was to slaughter an animal for someone’s meal. I saw a few documentaries to confirm that and opened my mind and eyes to this.” 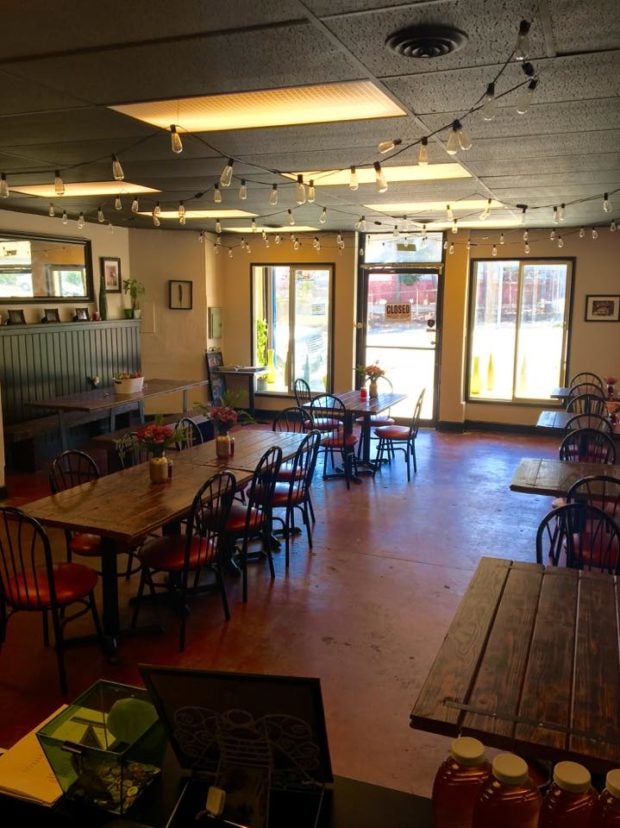 It’s unfair to ask Reina to share trade secrets, but any carnivore would raise an eyebrow if a dish lacks the fifth flavor called umami naturally present in animal products. Not sweet or sour, bitter or salty, umami is akin to savory, perhaps synonymous with what’s called “linamnam” in the Philippines. Can plants develop such a taste?

“We use wheat gluten, soy, mushrooms and textured vegetable protein. We use the same spices as we would for meat to achieve that umami flavor. It proves that you don’t need meat to achieve this deliciousness.”

The life and business partners hold special events every so often, like the Dec. 17 Kamayan Night, and vegan cooking classes Monday through Thursday nights.  They offer full-service or drop-off catering.  Kenny, who has a degree in music, books bands for parties.

From their flagship restaurant on Geneva Avenue where Daly City meets San Francisco, Nick’s Kitchen has regenerated on South San Francisco’s Grand Avenue, a hub of diverse cuisines including a Filipino haunt for pork and chicken barbecue. Yes, vegan definitely fills a void there.

Besides Filipino staples, vegan versions of Philly Cheesesteak, B.L.T, and Tuna Melt, Smoked Ribs and Mac & Cheese are offered in a casual setting.

“It’s good for everyone,” Reina, a mom, vouches. “Our grand location is open seven days a week. Our Geneva location closes on Tuesdays and Wednesdays.” 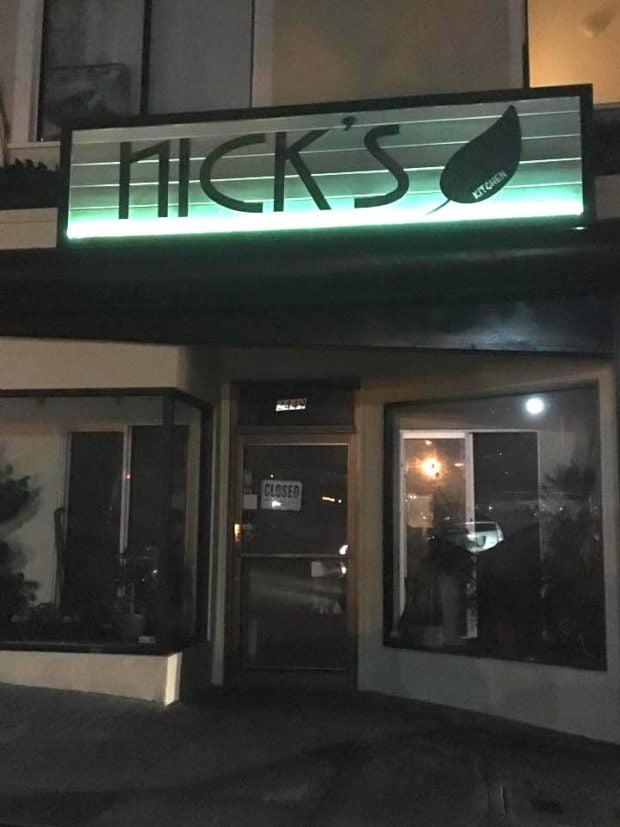 Reviews on TripAdvisor and Yelp laud both sites for the food and cleanliness.

“We would say eating at Nick’s leaves you feeling nostalgic and comforted,” Reina summed up their intended dining experience. “It’s a place you go to remember your family if they are far away, and your childhood. It’s a place you can eat as much as you want and not feel guilty. But still satisfied.”

Appetizers start at $12 and silog or that harmonious combination of fried rice, mock eggs and a protein all cost $15. Lechon Kawali and Caldereta are the big tickets at $18.

Patrons appreciate the time, effort and passion poured into recipes to soothe their homesickness and satisfy their hunger for a beloved cuisine.