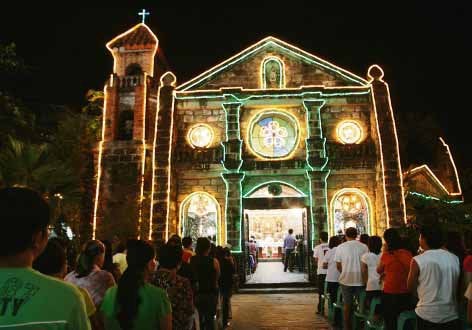 “The noble Church in the Philippines now stands among the great Catholic nations in the entire world,” said Pope Francis in a letter to Manyo Cardinal Maeda of Osaka (November 15, 2018).

Why? Because of “the lively faith of the pastors and of the Christian faithful,” viva fide pastorum et christifidelium, said the Holy Father, a lively faith manifested in the annual celebration of Simbang Gabi, for one.

During this time of the year, de Aparri hasta Jolo, from Italy to United Arab Emirates, From Australia to Canada, Filipinos from all walks of life joyfully celebrate the Simbang Gabi, a time-honored pre-Christmas tradition since 1699.

Y despues la Misa la mesa for Filipino families. As the historian Edward Gaylord Bourne (1860-1908) nicely put it: “By 1605, thanks to the missionary zeal of Spanish Augustinians, Dominicans, Franciscans, and Jesuits… since that date the Filipinos have been overwhelmingly Catholic in numbers, and they remain so today.”

Today, devotees still feel the deep impact of that evangelizing effort as they join and enjoy the Sinulog-Santo Niño Festival held on the third Sunday of January in Cebu City and Dinagyang of Iloilo City, both adaptations of the original Kalibo’s Ati-Atihan Festival, known as “The Mother of all Filipino festivals.”

In the Philippines, Christmas, Good Friday, Easter, Immaculate Conception are not only Catholic “holydays” but also government-declared-and-observed national “holidays.” Walang pasok!Moreover, year in year out, the entire nation stops during the day-long traslacion of the Black Nazarene from the Grandstand in Luneta to the Minor Basilica in Quiapo. Viva fide pastorum et christifidelium (Pope Francis).

As President Duterte lambasted the Catholic Church and called her a hypocritical institution, in contrast, Pope Francis praised the Philippines “for continuously sending missionaries to other regions,” missionarios alias in regiones continuo mittere.

Consider how the CBCP established the Missionary Society of the Philippines (MSP) in 1965, exactly 400 years after the actual period of evangelization by Legazpi and Fray Andrés de Urdaneta, OSA, in 1565 – a “living memorial” of the Filipino gratitude to YHWH God for the gift of Faith that we have received from the early Spanish missionaries.

Come of age, the Philippine Church assumed a most beautiful commitment to humankind ad extra and ad gentes, that is, “share to other (nations) the Faith we (the Filipino people) have so bountifully received.”

But not just the clergy but also the Filipino laity are missionaries. An estimated ten million of OFWs are residing far away from loved ones and legally or illegally employed in North and South America, Europe, Middle East, Africa, and Asia (International Labor Organization).

Our OFWs offer the best years of their adult life to country and Christianity (pro Patria et Ecclesia), resembling the Spanish missionaries who came in the name of the Crown and the Cross, captivating by their Christian Faith and Pinoy talents the hearts and minds of their non-Christian employers.

Singing Hontiveros songs during Simbang Gabi, OFWs fill up the once dormant churches in the United States, Hong Kong, Kuwait, Italy, Spain, Austria, New Zealand, Australia, and many other countries. In fact, they have taken over the pews formerly occupied by Irish Americans at Saint Patrick’s Cathedral in New York. “In Brunei, most of the 20,000 Christians are Filipinos,” Cardinal Tagle announced with pride.

As President Duterte has publicly suggested the “killing of bishops,” whom he described as “useless,” in contrast, Pope Francis keeps on trusting and appointing Filipino prelates to sensitive posts in the global Church.

Early this year, Pope Francis has expressed his prayerful solidarity with all Filipino bishops during their 116th Plenary Assembly in Cebu City. Full of trust in the Filipino spirit, Pope Francis has chosen Bicolano Bishop Adolfo Tito Yllana as Apostolic Nuncio to Australia; and Filipino-born priests Fr. Pedro Baquero, SDB, and Fr. Rolando Santos, C.M. as the bishops for Papua New Guinea.

As Filipinos share to the world the Faith we received, truly, “the noble Church in the Philippines now stands among the great Catholic nations in the entire world” (Pope Francis, 2018). Deo gratias!