Duterte to Trump: ‘Grab them by the puso’

Duterte to Trump: ‘Grab them by the puso’

This was according to the organization that is serving as a liaison between the two administrations, the Committee for the Advancement of Creative Imagination and the Systematic Institutionalization of Rodrigo’s Aspirations, better known as CACI SIRA.

“President Duterte quickly came to the aid of his very good friend by offering valuable insights into how to handle the media,” CACI SIRA said in a statement.

CACI SIRA released a transcript of a phone conversation between Trump and Duterte after the US president’s controversial press conference:

DUTERTE: Hello, Donald, I just watched your solo press conference. How are you feeling, my friend?

TRUMP: Oh, Rodrigo, I just don’t understand. I was clearly impressive, but the US media, those fakers, they’re making fun of me and attacking me. Terrible.

DUTERTE: Don’t let it get you down, my friend. Even here, media people are disgusting and stupid. They keep asking me to explain what I’m doing like it’s anybody’s business. These idiots won’t accept that I’m the president and that everything I say is true. 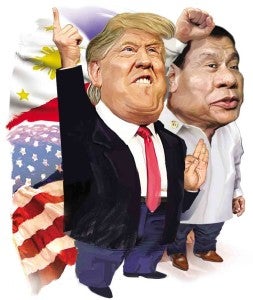 TRUMP: And it’s the same here in America, my friend. Sad.

DUTERTE: Well, don’t worry Donald. It will get better. It’s only been four weeks.

TRUMP: I know Rodrigo. It’s been a rough four weeks. How were you able to do it? I mean, you’ve said many crazy things too. And heck, your administration has even caused more than 6,000 deaths. I haven’t done anything like that. But look at you, my friend, you’re still in charge. I’m impressed.

DUTERTE: Well, let me give you some tips, Donald.

TRUMP: I would appreciate that, my friend. I was hoping to get some advice from Vlady, but he hasn’t been returning my calls.

DUTERTE: Yeah, that friend of ours, he’s unreliable. I’ve been calling him too about being my protector, but he’s been ignoring me. Deadma.

DUTERTE: But here’s one tip: you should hold press conferences at 3 a.m.

DUTERTE: Yes, but it has worked wonderfully for me. The reporters are so tired and sleepy, they don’t have the energy to ask tough questions. Here, let me send you a YouTube clip.

TRUMP: Wow, Rody, you really killed it. Those reporters were like sheep. They even waved and said good night to you, even after you left suddenly cursing and without even bothering to say good bye. I’m impressed my friend.

DUTERTE: Thank you, Donald. You should try that tactic. I guarantee that will help give you more control of the media. It will also make it easier for your columnists in the big newspaper to do their work.

TRUMP: Columnists in major newspapers? What are you talking about Rodrigo?

DUTERTE: Don’t you have people pretending to be columnists at the big newspapers like the New York Times or USA Today?

TRUMP: No, of course not. I’d never get away with that. You mean you have columnists at major publications in your country?

TRUMP: That’s simply amazing my friend. How the hell did you arrange that?

DUTERTE: Ah, Donald, They could not resist me, and some of these editors and publishers in our country aren’t very smart in the first place.

TRUMP: You are the man, Rodrigo. I still can’t believe you’ve gotten away with the many wild and outrageous things you’ve said.

DUTERTE: Come on, Donald, don’t be modest. You still won after being caught making crazy statements yourself. Like the video clip in which you said very naughty things about women.

TRUMP: Yeah, I thought I was a goner after that came out.

DUTERTE: I actually tried to call you after that came out. I wanted to give you some advice.

DUTERTE: You should have said people misheard what you said on the video clip. That you didn’t really say “grab them by the pussy.” That what you actually said was a Filipino word you learned from me. The word for “heart.”

TRUMP: I love it! It even sounds romantic! You’re really too much, Rodrigo. What will I do without you, friend.

DUTERTE: Ah, Donald, I’ll always be here for you, my buddy.