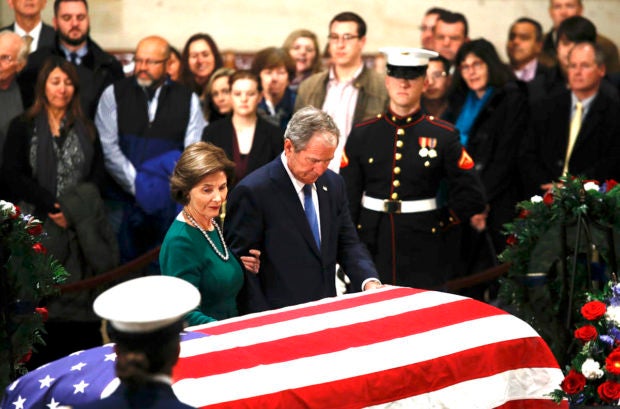 Every day Donald Trump comes closer to perfecting his Rodrigo Duterte impression. The CIA briefing on the Khashoggi murder essentially confirms that the Washington Post journalist was killed, then dismembered. There’s no directive to “kill him.” But as one U.S. senator said, “There’s a smoking saw.”

But what do we hear from Trump about the culpability of the Saudi Crown Prince BSM?

It’s still “Maybe he did, maybe he didn’t.” That’s the president of the free world, sounding like a White Duterte.
ADVERTISEMENT

In that sense, the 41stU.S. President George H.W. Bush departs the living at a good time. He lies in state, while the current president just lies. That was Bush’s main role in current politics. He was a throwback to when politics sort of worked. Better than now.

But I don’t want to overpraise Bush.

Earlier this year, Vogue’s Anna Wintour was called a “fur hag” by animal rights protesters in New York. But in any doting hagiography, Wintour would be hailed not as a “hag” but as a “saint.”

Of course, she’d have to die first.

I’m thinking about the term “hagiography” a lot lately because when someone famous dies, like a president (George H.W. Bush) or a prominent aspirant (John McCain), there’s a tendency for those in the media to pull their punches and go into super-adulatory mode.

Bush and McCain certainly were war heroes and political leaders. But saints? Hardly.

If McCain was such a great leader, how would you explain how he foisted Sarah Palin on a nation? His gift to conservatism?

And Bush the First?

At the Pen Oakland awards event I emceed last weekend, the esteemed writer Ishmael Reed, (see New York Times, “Black Male Writers for Our Time”) started speaking of Bush. He reeled off the former president’s greatest flaws–from Panama, the rest of Central America, and his CIA post, to the drug infestation of the inner cities. Reed didn’t even have to mention the Willie Horton campaign ad, the Gulf War, and the demonization of Saddam. The first few references were enough to strike a chord of truth that does not lie.

As an Asian American, I’d go back even further to Bush’s days as vice president under Reagan. Do you remember when Bush with a straight face said publicly about the Philippine dictator Ferdinand Marcos: “We love your adherence to democratic principle and to the democratic processes.”

Somehow that has never been erased from my mind.

But I do want to show respect for the dead.

There should be some safe period, some snark-free zone to allow us all to dwell on the finer qualities of any person in question.

Even Nixon, who at one time was considered the worst president in American history, got a free-pass period when his obits were written. Did you know the EPA was created under his watch? What a guy!

I lived and worked in Washington during Nixon’s death, and it was like the world had agreed to forget Watergate even happened.

It’s a form of grace, what I call “milk of amnesia.” You drink it when you have to deal with the contradictions of life and politics that come up in things like state funerals.

But the effects should last no more than enough to blow a hanky. Just one, if that. Maybe we need some middle ground. Just no public relations cleansing. We need a way to realistically honor a great man ceremoniously.

But we also need the media at the same time to remind us of the public person we are actually burying. We bury the man. But not the truth.

It actually leads to a fuller, more authentic picture.

How to mourn Bush in the current political climate

I think I know where the line is.

I lived in Texas for four years during Bush’s rise as a politician during my formative years as a reporter. I know people who absolutely loved the person they called “Daddy Bush.”

Bush certainly was a transplant from the patrician Northeast. He was a Yale Skull and Bones man who found himself lured by oil money to the Southwest, where he transformed himself into a hybrid—a homespun southern Yankee.

There were things about that unique Bush personality that came out in his presidency that were humane and “admirable.” But it also served his politics.

Was it really admirable to cut taxes for the rich and cut services to the poor, and then foist that responsibility on our churches?

Was a “thousand points of light” a call to service and volunteerism? Or was it government insisting it had no responsibility for its people? Maybe we should all help each other. Bush tried to make “Love your neighbor” work in the broader public realm. It sounded good in church. But “kinder, gentler” did not compute in a self-interested, self-absorbed America.

Boomers were maturing after the disco era and concocting schemes to redo America and get rich. The digital IPO wasn’t the enrichment mode back then. MBAs were out to remake mature businesses, buy them out, cut them to the bone, and fire workers for profit. The Leveraged Buy Out. Bush was president during those times. It was the harbinger of the upheaval to come in the next millennium, spurred by technology, when mature industries themselves would be threatened.

But Bush was an oil man. America doesn’t run on Dunkin’. Oligarchs like Bush always finish on top. And he paved the way for what we see now—an America where the one-percent got even richer.

There was also a shift in the media. Rush Limbaugh was becoming hugely popular on talk radio. Limbaugh merged humor and politics and began to model for the masses a post-Reagan American conservatism.

Bush was on top during all that and was its beneficiary. But Limbaugh came on with such an aggressive, in-your-face braggadocio. Bush, for all his conservative traits, always showed his belief in a genuine sense of humanity. But the style of the day was changing.

He was as good a Republican a non-Republican could expect. But he was the wrong man, in the wrong time, with policies that didn’t add up.

SO why praise Bush?

The best thing about Bush is that he tried to overcome his oligarchical tendencies. He was a patrician businessman who believed in public service.

Some people’s rise in politics is all about power. But for career politicians like Bush, the idea of public service comes through. It helps forgive his mistakes.

And that in the end may be the thing I won’t forget about the Bush presidency.

He knew what being a president meant. He respected the office. And he genuinely knew what decorum meant as a leader of the premier democracy known as the United States.

It was worth keeping united, not divided. And if Twitter had been invented, he sure wouldn’t have been tweeting.

In Bush, we had a man who, despite his politics, tried to let his humanity always shine through. His attempt was genuine, though the results weren’t always great.

A friend of mine told me yesterday that he couldn’t forgive Bush for appointing Clarence Thomas to replace the great jurist Thurgood Marshall. Me neither.

But the best thing about Bush: For all his flaws, you still sensed that he was looking out for all of us.

He was not a divider. He was a little out of touch, maybe. But he was the last of the great Republicans in a time when people in politics didn’t feel like they had to be at each other’s throats. When bipartisanship was a real possibility. When my old boss, Norm Mineta, could proudly claim as his friends staunch Republicans like Alan Simpson and Henry Hyde. You don’t start hearing about gridlock or obstruction in earnest until 1989 or 1990.

Current Republicans should take a lesson from this mourning period.

Under their watch, the presidency has changed even more. And so has the country–for the worst.

Is there anyone who doubts we’d be in a different place if there was someone from the GOP leading us who was a lot more like George H.W. Bush?

His death is like a public service announcement to the world and all of America on presidential decorum, and what being a world leader means.

As Bush lies in state, think of the current guy who just lies.

Emil Guillermo is a veteran journalist and commentator. He writes a column for the Inquirer’s North American Bureau. Twitter @emilamok  Listen to Emil Amok’s Takeout on Apple podcasts.