SOUTH SAN FRANCISCO, California — Two Philippine-born Filipino Americans have achieved in dramatic fashion what their U.S.-born counterparts for decades tried in vain to accomplish in this Northern California town.

First-time candidates Mark Nagales and Flor Nicolas claimed two of three open seats to the City Council here in a stunning upset of one incumbent in the last midterm elections.

Nagales, a former congressional aide, and Nicolas, a biotech executive, see-sawed for second and third place when the count began after poll closing at 8 p.m. on Nov. 6. Final tally will be ratified Dec. 7.  At press time Dec. 3, Nagales took 8,340 votes or 18.81% and Nicolas had 8,042 or 18.14 %, leading the unseated incumbent by 205 votes.  If the trend holds as expected, both will swear in on Dec. 11 as the first Filipino Americans ever elected to govern South San Francisco. 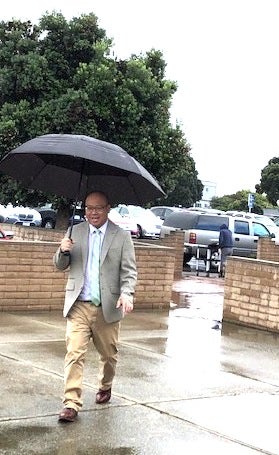 Nagales has asked his mentor and former boss U.S. Representative Jackie Speier to swear him in.  Nicolas is giving the honor to her husband, Nenar Nicolas, the first of many to whom she says she “owe(s) this election.”

Prior to the double victory the first and only known person of Filipino descent elected in what’s familiarly called “South City” was the late Andrew Estigoy, who served on the District School Board before getting elected to the San Mateo County Board of Education in the mid-1980s.

While Nagales had had his eye on political office as a schoolchild fascinated by government, Nicolas comes from a politically entrenched clan in Batangas, Philippines, but kept politics at bay only to face formidable personal challenges soon as she decided to step into the ring this year. They represent two generations of Filipinos who immigrated in the 1980s:  Nagales, who was brought over from Manila as a baby by his parents, Cesar and Virginia Nagales, represents the Millennials, and Nicolas, who arrived with an engineering degree from Mapua Institute of Technology and MBA studies at Ateneo de Manila, the Baby Boomers.

Nagales, 38, now Outreach Coordinator for fair housing nonprofit Project Sentinel, began his professional life in the world of politics. He was aide to his former South City High School History teacher Gene Mullin, who was elected to the SSF City Council and then the State Assembly.

After Mullin retired, Nagales joined the 14th congressional district under Speier, ending his service this year as Director of Constituent Services to run for city office.   A past president of the Filipino American Democratic Club of San Mateo County, he graduated with a double major in History and Political Science from San Francisco State University.

Nicolas is senior director of pharmacovigilance or the science of drug safety at Forty Seven, Inc., which she describes as a “clinical-stage immuno-oncology public company that is developing therapies licensed from Stanford University targeting cancer immune evasion pathways.“

A master of Public Health from the University of Massachusetts at Amherst, she is also immersed in her faith community.  She and her husband received the “Parishioners of the Year” honors from All-Souls and Mater Dolorosa Catholic Churches for their volunteer work.

Nagales and Nicolas both invoke the name of their city’s most famous Fil-Am resident, Alice Bulos, for their achievement, saying she would have been proud to witness the milestone.

Nagales confided that his was a “12-year process of gaining invaluable experience working on issues” to follow in his role models’ footsteps.

Calling himself “big on family,” Nagales in 2013 rethought his plan to chase a city council seat “because I had a very young family, and I wanted to make sure that I spent time with them; if I had run, I knew that it would take valuable time away from my family,” he told INQUIRER.net.

Five more years gave him quality time with wife, Amy, and their children, Aidan and Josephine, and boosted his resolve to occupy that coveted seat. As his family grew, so did his anxiety about the affordability of residing in his home town.

“It became really expensive to live here with the rising cost of rent,” he said, relating a personal experience that motivated him to seek elected office.  “I asked my family the question, ‘Do we need to move away?’ Fortunately, we were able to stay, thanks to a first-time homebuyers’ program. I know that other families go through similar experiences every day. I relive those experiences every time a housing project comes up for a vote in the Planning Commission because I want to make sure there is affordable housing in the project…(and) have been successful in getting some developers to provide more BMR’s (below-market rate housing) in their projects. By building more affordable housing, we can help more people stay here.”

Voice for his demographic

He sees himself as a voice on the city council for his demographic.

“Young families have a lot of concerns and issues that they want addressed. It was important to have a council member who’s going through the same thing and who can speak to those issues.  When I asked my wife should I run, she said, ‘Yes. The city needs you, they just don’t know it yet.’”

Close to a fifth of the city’s electorate did know, giving thumbs up to his platform: “Improving public safety, cutting traffic congestion, improving infrastructure, and revitalizing SSF’s Downtown area.”

Equally important, said the Council member-elect who grew up in his parents’ home near St. Augustine Catholic Church on Callan Boulevard, is to “improve the quality of life for all families, including providing more childcare, upgraded parks, and accessible parks and recreation services accessible.”

Though he received endorsements from high-powered officials and organizations, this successful campaign taught the incoming freshman valuable lessons.  His biggest takeaway: “Don’t take anything for granted. A lot of people are relying on me, and I take that responsibility very seriously.”

Soon as poll results were known, he said he left a voice message on Nicolas’ phone to congratulate her and offer to “talk soon.”

When Flor Nicolas and her husband immigrated in 1988 on petition by Nenar’s sister, they chose to settle down in South San Francisco because they were adamant on enrolling their children Genevieve-Marie, then 9, and Elijah-Giuseppe, then 6, in a Catholic school.  All-Souls, the oldest church in town and the only one with a parochial school accepting new students, ended the Nicolases’ search and gave them an extended family.

Its parishioners formed a circle of support around them when their house burned down two days before Christmas in 1990 while they were visiting Nenar’s sister in Chicago.

“The whole All Souls community embraced us and made us feel so loved,” Nicolas told author.  “The school wrote off my children’s tuition fees for the rest of the school year and various church organizations provided us with food, groceries, clothes and monetary donations.”

Giving back raised her profile as she was elected president of the parish women’s club, the first Filipina to take the post, she pointed out.

Her faith is the source of Nicolas’s courage and strength.

They had barely settled into their new home on Baden Avenue when Flor was diagnosed with cervical cancer, requiring an 8-hour surgery and chemotherapy. Recovery deepened her resolve to be more active in church as a lector and eucharistic minister.

Her involvement in her parish and the Police Activities League amped up her reputation. It caught the attention of city leaders, who recognized her skills and readiness to serve on commissions.

Council Member Karyl Matsumoto, herself a barrier breaker as the first Asian American and first of now three females elected to the City Council, thrice made overtures to Nicolas to run for office.  And when Nicolas discerned the timing was ideal, in the middle of this year, she turned to her church pastor about her decision.

“What finally sealed the deal was what he (Mater Dolorosa Pastor Rev. Roland De la Rosa) said to me after quoting the call for service in our Catholic belief: ‘Flor, you are being called to serve.’ I believe in what I have done and the relationships I had built as a community and city volunteer in the last 30+ years, but I did them all not in preparation for running for office but because I genuinely felt that this City and this community is mine.”

Days before filing candidacy papers she received news that a niece in Southern California had met a fatal accident on the way to work.  The Nicolases stepped in for their niece’s parents, who were in Manila, to comfort the bereaved husband and son.

Nicolas had barely completed the candidacy process when she jetted to Vancouver for a class reunion confirmed a year before.  She returned home to hit the campaign trail while attending to her tasks at the day job she had started in May.  She even managed to attend a fund-raiser for Nagales, whom she has known since his days as an Assembly aide. With her husband’s assurance to “be with me every step of the way,” she managed to organize support.  “There are a lot of ups and downs and there were sleepless nights.  Nenar reassured me every time that this is for the best and everything will happen according to God’s Divine Plan.  It will be His will and I should just do what is humanly possible to the best of my abilities.”

Her not-so-secret refuge is saying the rosary.  “Calms me down every time,” she said.

Nicolas expressed unease speaking to this writer before results were officially certified. What she was certain from the start is her capacity to give as promised, particularly to preserve the character of the town that welcomed her family and “protecting it for our future generation.”

“I hope that we will continue to be a city proud of its diversity,” she said, noting the significance of the rise of Fil-Am and other leaders of color. Filipinos’ “apathy and lack of representation” she said had accounted for the long absence of elected Fil-Ams in South San Francisco.

Like her fellow Fil-Am Council Member-elect, she wants collaborative interaction and the “revival of Alice Bulos’ ideals” to empower the community by inspiring Filipino American engagement.