Becoming dual citizens — having the best of both worlds 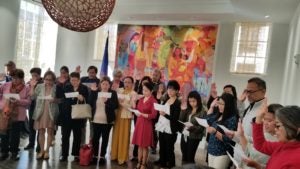 WASHINGTON, DC — Romulo A. Alejandro became a naturalized U.S. citizen in 1992, following the established legal processes. During the oath-taking, he says there was a brief twinge of sadness as he was renouncing his allegiance to the country where he was born and raised. He was reminded, he recalls, of an oration entitled “I am a Filipino and Proud to be One.”

However, it did not take long for him to fully realize that “I am an American and I am Proud to be One.”

“Becoming an American became very real when I voted for the first time as an American,” Alejandro adds. “I felt then that I had a voice that counted in an election process that was not rigged. I made a conscious and deliberate decision to embrace the American culture. It was time to assimilate not isolate with my fellow Filipinos. To me this is the only way to live and be an American.” 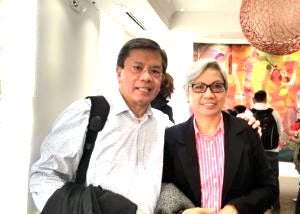 Romulo Alejandro and Eleanor Macalma smile for the camera after their swearing-in as dual citizens. BING BRANIGIN

Having cake, eating it too

It is like “having your cake and eating it too, and having the best of both worlds,” Alejandro muses. “I say unequivocally and with strong pride and conviction that I am an American and a Filipino and I feel great. I simply say, I am a Filipino by birth and an American by choice!”

Like Alejandro, Eleanor Macalma of Richmond, Virginia. has also applied for dual citizenship. “At first, I did it for the properties in the Philippines which we are trying to update and upgrade,” she explains. “Also, my husband and I are preparing for retirement in the Philippines, which will be economically be better for us.  When I took my oath to become a Filipino citizen 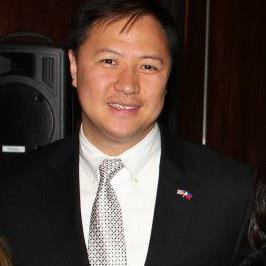 again, it was very emotional for me as national pride swelled in my heart. I am home again where I was born and raised to be an adult. The heart never left. Being an American citizen gave me the chance to raise my family and avail of many opportunities. It’s a good feeling now that I have two countries, I can call home.”

To Maria Lourdes Moody, becoming a dual citizen means being able to work in both countries without applying for work permits or visas. “Now I can purchase properties, go back to school, work, vote and elect leaders,” she points out. “My family owned several properties in the Philippines, and I am going back to invest more. More than that, what I had learned as an American is the power to vote, and I will certainly exercise my duty as a returning Filipino.”

Best of both worlds

“As a young Filipino American, I was raised enjoying the best of both worlds,” he says. “So now, I would like to give back, and invest in the Philippines. I want to do that legally, so I have to acquire Filipino citizenship and abide by the rules. As an active member of the Filipino American community in the US, I would like to be able to invest not only economically but also politically through voter education and making enlightened decisions in choosing leaders.”

Dulce Guevarra has lived in Gaithersburg, Maryland. for many years. She finally decided to become a dual citizen. Her reasons: “Primarily to vote and invest in the country. Take advantage of the ease in facilitating the sale of properties we now have acquired.  And participate in the country’s electoral process.”

Guevara and her husband, Precy, are active member of Feed the Hungry, Inc. Each year, they join missions to provide assistance to the less fortunate and support projects that raise scholarships, build schools, and promote livelihood initiatives.

Indeed, the benefits of dual citizenship have drawn more Filipino Americans to take this important step.