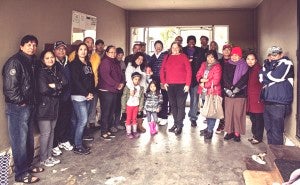 Tenants of the Bay View Apartments in Alameda with Alameda Renters Coalition, Tenants Together and Filipino Advocates for Justice gather in Alameda City Hall to speak to the City Council. ARC/Joe Klien

Tenants at the 470 Central Avenue or the Bay View Apartments prevailed in their court fight against landlord Matt Sridhar, after the Alameda Superior Court last December ruled that the landlord’s eviction notices did not comply with the law.

“We are incredibly relieved to be able to stay in our homes,” said longtime tenant Rommel Laguardia. “We’re also proud to have won this fight, and we hope this example shows other tenants that yes, we can win.”

Thirty-three families had been threatened with eviction since Thanksgiving of 2015 when the building was bought by Sridhar Equities, an investment firm from Silicon Valley.

Kristal Osorio, a tenant at the Bay View, together with other Filipinos Advocates for Justice (FAJ) youth leaders, responded by mobilizing their peers and holding events on campuses to raise awareness. Kristal Osorio, a tenant at the Bay View Apartments and Filipinos Advocates for Justice (FAJ) youth leader, led the fight against eviction of the Filipino American families from the apartments. VIDEO GRAB

Last year, youth as young as eight years old and other tenant advocates spoke out at numerous Alameda City Council meetings to stop the evictions and the huge rent increases.

The City Council, however, responded with Ordinance 3148 last November, which continues to allow no-cause evictions and does not cap rent increases. It enables landlords to create a climate of fear and intimidation. It even allows 25 percent of tenants to be evicted annually without cause.

Tenants are also not protected from landlord harassment campaigns if the landlord wants to empty the building.

Despite the setback in City Hall, the fight continued for tenants like Osorio and support groups like the Alameda Renters Coalition, Tenants Together and FAJ, who never wavered.

“There were actually about three to five families in 470 Central who continued their fight in the court. They fortunately won, but we are still communicating with each other to prepare ourselves from future threats of eviction. One way that we gather is having a potluck in our apartment complex once in awhile to discuss further steps we are going to do to resist and stand in solidarity in the future,” disclosed Osorio.

Sridhar purchased the building in late 2015 and tried to find tenants who would pay nearly double what current renters pay.

Despite losing in court, Sridhar immediately retaliated against tenants by trying to evict once more this past January. The attempt was based on a three-day “pay or quit” notice he sent to tenants whose back rent had accrued when he reportedly refused to accept tenants’ rent payments while the court case was being heard. The eviction cases based on the three-day notices were also dismissed recently.

Renter advocates and tenants at 470 Central are pushing for an end to no-cause evictions as part of their comprehensive plan to improve the city’s current rent stabilization ordinance. 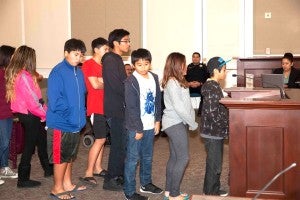 Children and adolescents ranging in age from 7 to 17, representing the 33 families go up together, and one by one explain to City Council members why they want to stay in their homes. ARC/Joe Klien

Osorio added that ARC and FAJ were able to put a ballot initiative called M1 last November election that includes a sustainable rent increase and protection for renters, but the initiative did not pass.

“Our fight does not end here, because Alameda Renters Coalition, Filipino Advocates for Justice, renters and our allies are still continuing to organize and plan out our next campaign to achieve our goals to have rent control in our island and protect renters from unjust evictions,” said Osorio.

Mari Perez-Ruiz, president of ARC maintain said that with Tenants Together and FAJ they will continue to push for an end to no-cause evictions.

“We know that greater demand for housing has driven real-estate prices and rental costs ridiculously high,” Perez-Ruiz explained. ”This demand, however, should not come at the expense of the most vulnerable members of our community. The fight to end no-cause evictions is about defining what kind of community we want to become,”

Ubaldo Fernandez, of East Bay Community Law Center, who represented the tenants in the lawsuits, said, “These families’ homes have now been put in jeopardy on two separate occasions by meritless lawsuits. Without just cause for eviction protections in the city of Alameda, these families will remain exposed to eviction without any fault of their own.”