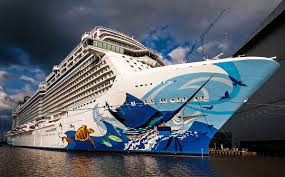 Two unnamed Filipino crewmen had to be airlifted from the cruise ship Norwegian Escape after suffering second degree burns. WIKIPEDIA

ROCKY MOUNT, North Carolina  — The U.S. Coast Guard has flown two crew members from a cruise ship after they suffered burns during an accident in the engine room.

The two Filipino crewmen were in their mid-20s and suffered second-degree burns. That means their injuries involved swelling, blistering and possible damage to the deeper layers of the skin.

The Coast Guard said in news release that the incident occurred Monday, Nov. 26 aboard the Norwegian Escape. The ship was about 24 miles from North Carolina’s coast. The 1,000-foot ship is part of Norwegian Cruise Line and was built in 2015.

The cruise ship contacted the Coast Guard shortly before 4 p.m. The service dispatched a Jayhawk MH-60 helicopter to take the men to an airport in Rocky Mount where emergency crews were waiting.