The joy and tragedy of my family’s chain migration

The joy and tragedy of my family’s chain migration

We should have expected the skirmishes on the southern border that occurred over the weekend. When Donald Trump sends military force to the border, you are relieved that all you hear about is tear gas.

But you’re dismayed because there’s no good reason the situation couldn’t have been handled more peacefully.

Maybe the president needs a less jaundiced, xenophobic view of immigrants–one that would make him realize separating families at the border is just wrong. 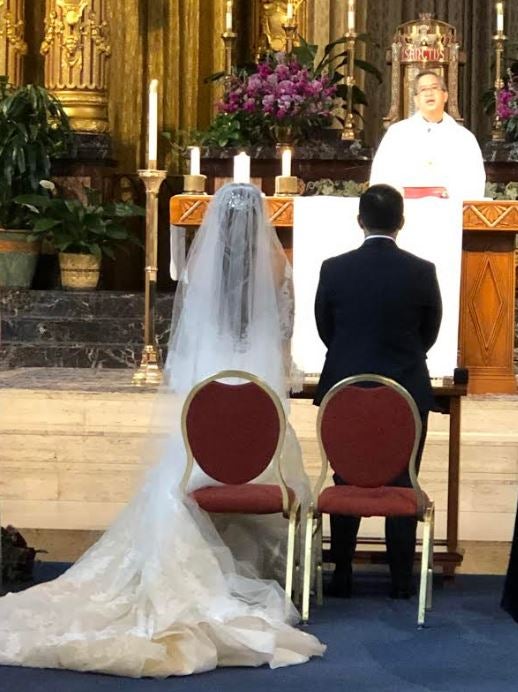 Maybe Trump needs to see how positive a family unity policy in immigration can be in developing the kind of individuals and values that truly make America great for generations.

If the president wants to see what immigration can really do for our country, he should have been at my nephew Daniel’s wedding this past weekend.

Three-hundred guests. An open, hosted-bar at the reception. A four-course sit-down meal with wine. Dancing till the wee hours.  The immigrant families of the bride and groom pumped some serious money into the economy. And not to a Trump property.

I didn’t hear one person mention politics all night.

Despite all the polls that show the Filipinos as the Trumpiest among Asian Americans, this was a celebration of love and unity, not hate and division.

In fact, Trump could have crashed Daniel’s wedding party before or after the money dance. It was near the airport in San Francisco. But he could have made it. And he would have been welcome as long as he left his ICE agents outside. None needed at this celebration. Everyone was legal, as far as I know.

And there was no caravan.

This was a real celebration of the merger of two immigrant Filipino families. The kind of story that shows how great America has become because of immigration, that great American institution that Trump has maligned and mischaracterized since the day he took office.

Daniel’s story predates his own birth and goes back to my father’s arrival to America as a colonized Filipino in 1928. My father arrived with his brother Joe during the Depression. Anything was better than life in the far north rural provinces of the Philippines. Even the racism and discrimination found in America.

My dad arrived in America to get his democracy direct. Here he was still a colonial, an American national, better than slave, but not by much. A ward of the state. Under the circumstances, few Filipino women were allowed to enter, and the shortage of Filipino women meant there would be few Filipino families started here.

It was made worse when Filipinos were seen as taking jobs and women, specifically white women.

Sexual jealousy of Filipinos ran high among white men. “Little Brown Brother” was anything but. He was seen as dashing, romantic and a threat to white male masculinity. It caused a kind of “Filipinophobia,” as I call it in my show, “The Amok Monologues.” There were riots and violence against Filipinos in California, even lynchings.

Anti-intermarriage laws ensued. There could be no Filipino weddings or families. I thought about all that as I watched Daniel and his bride Kristine say their vows for the first time.

My father ultimately got married to a Filipina, but only after nearly 30 years passed since his arrival in America.

My father was 50 years older than me. Great, because it shows things still worked. But not so great because older dads just weren’t the norm. I always thought it was just because he was lacking in social skills.

I didn’t realize it was racism.

It was only after the 1965 Immigration and Naturalization Act that my father and his brother petitioned to get the son of their older brother to come to America. And when Nerring finally arrived a few years later, it took him nearly ten years to be able to petition for his three brothers, his sister and all their respective spouses and ultimately, children.

From that time on, it took 17 years of waiting before the brothers and sister arrived in 1994. And 17 years is considered a short wait.

Two years later in 1996, all the American-bound Guillermo family arrived in San Francisco (many still remain in the Philippines). Thirteen in all.

And that’s what Trump calls “chain migration,’ the brothers and sisters visa he has said he wants to end.

But chain migration has not only achieved family unity for millions. For the Guillermo family, it has produced contributing members of the American middle-class since 1928.

Honoring Daniel
Daniel arrived when he was just nine years old. He lived in the South of Market in San Francisco with his family who recycled the past and worked their way through retail and restaurant jobs to raise the kids. His parents, Susan and Brillante, did an amazing job to herd Daniel and his younger siblings through the public school system. 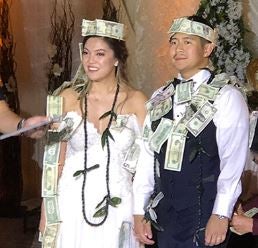 Here’s Daniel and his bride, Kristine, after doing that Filipino wedding tradition, the money dance. You pin a high denomination bill or two to indicate your faith in the marriage. A buck is not encouraging. But a Fifty pinned to the bride’s train shows real optimism and gets a dance with the bride or groom. I wonder if Melania–when she tied the knot with Trump–got a money dance? INQUIRER/Emil Guillermo

After graduation from San Francisco State University, Daniel took his degree and began work in the computer field. He’s been with a top company ever since, earning a good salary, but living frugally. He pooled his resources with his family and bought a pricey home in San Francisco. He met Kristine, herself an immigrant, while they were both students. Now they’re married. Something that was far too difficult in my father’s day.

This is the typical legal immigrant story, especially for Filipinos. Long waits of more than 20 years  in some cases before entry, and then hard work before achieving real success as productive members of society.

Daniel’s story has nothing in common with Trump’s hateful stereotype of immigrant criminals who are gang members and must be feared. In fact, most immigrants are like Daniel. Humble, hardworking types–people you won’t see in any headlines.

Or you’re shot, like another nephew who came from the Philippines with Daniel.

I have written about Stephen’s case  extensively. After a night of drinking, celebrating his impending graduation from SF State, he went into the wrong apartment and was gunned down. The gunman was arrested but, the laws in California permit people to shoot to kill if an intruder enters their home.

Stephen was not an intruder looking to do harm to another tenant. He was a smallish kid with a big smile. Didn’t matter. A naturalized citizen. Didn’t matter. San Francisco DA George Gascon doesn’t like to prosecute cases he can’t win. He would not challenge the so-called Castle Doctrine and didn’t charge the shooter, who killed the wrong guy. Gascon has a reputation for going after the low-hanging fruit, releasing minor drug criminals, expunging records of pot arrests, and the like. After three days in city jail, Stephen’s gunman was set free.

There’s no statute of limitations, but the police investigation was limited. Now the case has been allowed to go cold. And the family remains helpless.

There’s been nothing new, just Daniel’s wedding this past weekend, coincidentally days before another significant family marker this Tuesday. It’s Stephen’s birthday on Nov. 27th.  This week, he would have been 31 years old.

His death, a bureaucracy’s silence and inaction on a pro-gun law, always feel like punches in the gut.

But like other immigrant families that came before them, our family stays resilient, as it moves forward and grows, in spite of the tragedy it will never forget.

We danced on Saturday. On Tuesday, we remember Stephen–born in the Philippines, naturalized in San Francisco, gunned down in America.

Emil Guillermo is a journalist and commentator. He writes a column for the North American Bureau. Twitter @emilamok. Listen on Apple Podcasts.