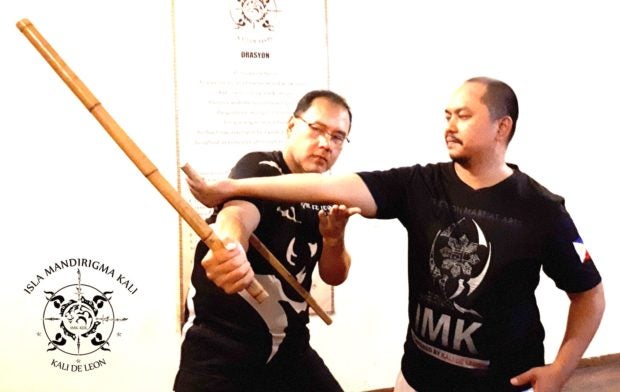 Roland Isla (in eyeglasses) and a student showing the KDL using arnis. CONTRIBUTED

To most immigrant Filipinos in North America, going home “for good” to the Philippines may not be on top of the agenda. Career, family, culture and political stability are just a few of the considerations one has to make before making the big move.Roland Isla, a Filipino Canadian, did make the biggest decision in his life — moving back to the Philippines.

He left his lucrative job as a quantity surveyor to build a life in the country that his parents had left.  Eventually, he established the Isla Kali Mandirigma Martial Art School in Manila.

“I felt a sense of affinity that made me believe that I belong here not in Canada. Completely irrational (to some). I moved to the Philippines in August 2001,” Isla, now 54, says.

In the early ‘60s, Filipinos began immigrating to Canada to work in the garments, sales and manufacturing fields. Later in the ‘70s, more Filipinos came under the family reunification program. In the ‘80s, the recruitment of caregivers paved the way for more Filipino immigrants. Presently, there are 851,410 Filipino Canadians. Most immigrants settle in Ontario, but many are scattered in the different regions.

According to the Vancouver Sun, Canada is attractive because it ranks highly by objective measurements — economic opportunity, pollution levels, health care, tolerance, access to education, low corruption, the rule of law, personal freedom and government stability.

In 1970, the Isla family immigrated in search of a better life. Isla recalls that in the ‘70s there was hardly a Filipino community. Oftentimes, they were the only Filipinos in places they moved to. Canadian society then was not as open to diverse cultures as today.

“My parents were transitioning to an often shockingly different culture as much as we kids were. This meant trying to fit into that new society as best we could,” he says.

At home, they taught their parents to speak English, instead of the other way around.“My siblings and I understand Tagalog, but the ability to speak it fluently is tenuous at best,” Isla explains.

Isla also admits that like most Filipino Canadians, he found aspects of Filipino culture, history and politics embarrassing.

“I didn’t have any Filipino friends. My best friend jokingly referred to me as The White Guy because I acted ‘whiter’ than he was,” he says.

Yet, the Isla family remains Filipino in many ways, like showing respect and deference to elders. The family is still their safe place when the going gets rough in larger society.

Food also connects Isla to the Philippines. “What we ate was a good 90 percent traditional Filipino cuisine.  We had rice with every meal every day. Our family’s favorite meals included adobo, longtganisa, kare kare, baked ham and lumpiang toge,” Isla says.

Isla was a junior at The University of Toronto,studying the politics and history of African and Latin American countries, when the EDSA People Power that toppled the Marcos dictatorship took place in February 1986. It eventually changed his outlook on life.

“I felt like I had to know something about what was happening because all of my classmates were fascinated by it and kept asking me questions about it.  All of a sudden I saw the heroism of everyday Filipinos who put their lives on the line to defend an election,” Isla recalls.

Strangers congratulated him, patting him on the back, telling him that Marcos left the Philippines and the good guys won. It was then that he wanted to be a Filipino again.

And to become a Filipino again, he discovered an ancient Filipino self-defense martial art.

As an athlete throughout his school years, Isla wanted an activity to keep him physically fit after graduation. He did Kung fu and was already an instructor when he discovered Kali.

Kali is an indigenous Philippine martial art focusing on the use of sticks, knives and hand combat.  Kali is interchangebly used for eskrima and arnis. Guro Jun de Leon is the founder of Kali de Leon (KDL) martial arts in Toronto. In Filipino, guro means teacher.

“I heard about a Kali teacher not too far from where I lived and that’s how I found Ama (father)Guro Jun DeLeon,” Isla says.

Known for its selectivity, KDL has students from various ethnicities who are able to comply with the skills requirements and the demand “to demonstrate humility, openness, and compassion.”

Isla studied KDL in Toronto until he moved to the Philippines. It took him 20 years of study and training before he was officially made a “guro” or teacher.

In 2003, Isla put up Isla Kali Mandirigma in San Andres, Bukid in Manila. It is the Philippine branch of KDL Toronto. Presently, the school has students from the Philippines and overseas. He frequently travels abroad to conduct workshops and trainings on KDL.

Isla says that anyone can start martial arts training at almost any age, from 5 years old and above, as long as the person is relatively healthy.

“I think martial arts allow us to communicate with others on a personal level without necessarily talking and more importantly without need of a computer screen or internet. It facilitates that human connection we all want,” Isla explains. 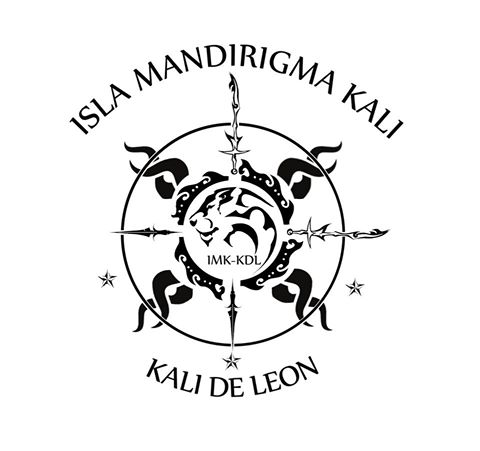 Isla also explains that martial arts are inherently dangerous, hence, learning to control physical strength and emotions is important when dealing with training partners. Trust is also important because during training each has to allow himself or herself to become vulnerable. Respect and self-respect are gained through these interactions.

Isla believes that the characters in Asian martial arts films are good role models in terms of ethical and moral make-up as well as their skills.

“But we’re just human beings like anyone else. We can lose fights as easily as we lose our tempers. We have to work as hard as anyone else in maintaining our moral compass. Our advantage is that our practice reminds us of this all the time and we’re probably more self- aware than most people,” he explains

Living in the Philippines, for 17 years now, has its advantages and disadvantages, Isla finds. Getting accustomed to crowds, noise, traffic, the weather and some customs was not easy. It took Isla two years before he found the courage to drive in Manila. But his desire to embrace the Philippines was stronger than any second thoughts, especially when he got married and his children were born.

During school vacation, his family travels to Canada to maintain their kinship with their second country.

“Filipino migrants should come to visit the Philippines and see as much of the different parts of it as they can. So that they can see for themselves what the country and people are like. Appreciate the country the way non-Filipinos do and don’t have preconceived notions or judgments,” Isla advises.