‘I Am a Filipino’ cookbook a manifesto of identity

‘I Am a Filipino’ cookbook a manifesto of identity 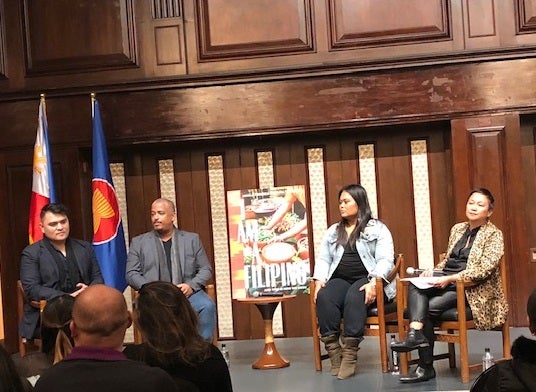 Nicole Ponseca and Miguel Trinidad (center) being interviewed by Penguin publisher Elda Rotor during the book launch at the Philippine Consulate. Another guest, Jose Antonio Vargas (far left), spoke about his own book “Dear America.” THE FILAM

“I Am a Filipino” is best remembered as Carlos P. Romulo’s patriotic anthem. Where I went to school back in the day, we were required to memorize it and declaim it in front of the class, complete with knowing when to pause and when to enunciate the dramatic phrases.

More than half a century later, “I Am a Filipino” – with the addendum “And This Is How We Cook” — is being resurrected thousands of miles away as the title of a cookbook written by life partners Nicole Ponseca and Miguel Trinidad. They are the founders of Maharlika Restaurant and Jeepney Gastropub in Manhattan, the duo widely credited for drawing mainstream attention to Filipino food. Nicole, who also serves as the creative director, acknowledged CPR’s essay was an inspiration.

“When I was growing up our food was literally a joke,” recalls Nicole in her introduction to the book. It was through shows like Fear Factor or Howard Stern that she learned to be embarrassed by the food she ate at home. Later, her education revealed that Filipino food is nothing to be embarrassed about.

She launched Maharlika in the East Village in 2011 and Jeepney a few blocks away the following year, motivated only by a longing for an eating place “more boisterous and lively that felt like home.” It did not matter that her background was in advertising. She was looking for a Filipino restaurant that served good food and was easy on the eyes. The mostly turo-turo style (“point-point”) eateries served delicious, filling food but were not very personable when inviting guests to dinner.

In San Francisco, where she grew up, she worked in only one restaurant and left after one day. It was in NYC where she got a more well-rounded experience working as “hostess-server-busser-dishwasher-bartender-manager” at night, while working as an advertising executive by day.

The daughter of a nurse and a Navy man, Nicole said it was her father, who cooked in the Navy, that inspired her love of food.

“It was in the kitchen where my father and I talked about Kare Kare and Pancit and feeding me Bagoong, Spaghetti with ketchup, Hamburger Helper,” she said at the October 29 launch of her book at the Philippine Center. “So that is the first knowledge that what I’m eating at home is different, and therefore I am different.”

Finally, Nicole decided she would open a Filipino restaurant. She invited Miguel Trinidad, who is of Dominican ancestry, to be the chef. He is not Filipino, but she knows him to be an “excellent chef and a good leader.” Together with another friend, mixologist Enzo Lim, they unfurled the curtain on Maharlika, initially as a pop-up restaurant. They rode on the wave of the pop-up craze where the risks of bankruptcy are lower. “We didn’t have enough money and I was getting impatient,” she told The FilAm in a 2011 interview. 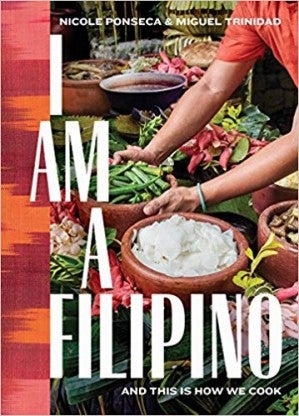 “When we embarked on the restaurant,” she told her audience at the book launch, “It’s all these ideas, preconceived notions, what’s right what’s wrong, how should it be priced at? One of the first conversations about restaurant food was what are the things that held us back? Why didn’t Filipino food come forward until recently?”

She continued: “Take a look at us, we had the U.S. military, we speak English, our numbers are large and yet there weren’t very many Filipino restaurants. There were some, Cendrillon, Ihawan, and in California, Barrio Fiesta. But why were we not pushing the dialogue. So, those were the first things I wanted to understand. When you push the conversation, you’re going to receive flak, you’re going to have resistance. But if you understand how resistance works it’s really building resilience.”

Nicole has recently added Tita Baby’s Panciteria in Williamsburg, Brooklyn to her expanding real estate, establishing yet another footprint for Filipino food to be savored, appreciated, and recognized.

“The title is very emotional for us,” she said, grateful that her publisher, Artisan Books, signed off on the title that allows her to make a statement.

Nicole’s friend, journalist Jose Antonio Vargas, said it is more than a cookbook. “It is a manifesto of identity.” © The FilAm 2018