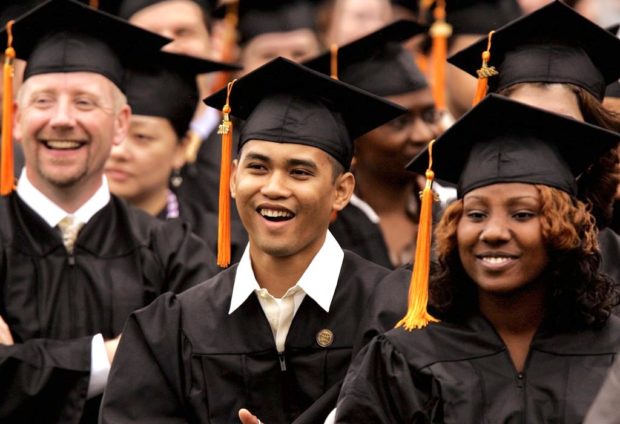 The number of foreign students heading to U.S. colleges and universities fell again last year, the second straight decline after more than a decade of growth, a new report finds.

Enrollment of new international students dropped by about 7 percent in fall 2017, according to an annual report released Tuesday by the State Department and the Institute of International Education, a nonprofit research group based in New York.

The overall number of foreign students in the U.S. still increased slightly, by 1.5 percent, fueled by growing numbers of students who stayed for temporary work after graduation. But the number of newly arriving students slid to about 271,000, the lowest levels since 2013.

The report’s authors cited sharper competition from other countries including Australia and Canada, along with the rising cost of education in the U.S. They largely dismissed worries among some colleges that the White House’s policies and rhetoric surrounding immigration could be driving students away.

“We’re not hearing that students feel they can’t come here. We’re hearing that they have choices,” Allan Goodman, president and CEO of the institute, said in a call with reporters. “For the first time, we have real competition.”

But some schools contacted by The Associated Press say the political climate in the U.S. has made international students feel unwelcome and has contributed to declining numbers.

State Department officials underscored that the U.S. hosted nearly 1.1 million international students last year, more than any other country in the world.

Yet the 1.5 percent growth is the slowest since a period from 2002 through 2005, when international enrollment fell by 4 percent following the Sept. 11, 2001, attacks, according to data provided by the institute.

Among new students, the steepest losses came from Saudi Arabia, South Korea and Mexico, while China and India continued to send the largest numbers, accounting for more than half of all foreign students in the U.S.

The 15 percent decrease from Saudi Arabia comes a year after the kingdom scaled back a scholarship program that covered costs for Saudis studying abroad.

Although the report focuses on data from 2017, some schools contacted by the AP said declines have continued this year. At the University of Central Missouri, foreign enrollment surged to 2,600 in 2016 before plummeting to just 650 this year.

“We have had conversations with parents who feel like their children will not be safe here, that their son or daughter may not be physically safe,” said Karen Goos, the school’s assistant vice provost for enrollment management. “I do think that it’s a contributing factor.”

At Purdue University, one of the nation’s biggest hubs for international students, total foreign enrollment fell by 2 percent this year. Officials said they intentionally admitted fewer undergraduates from abroad amid worries that they might not accept the offer.

“There was concern that students might not find the U.S. to be as an attractive destination given certain political rhetoric these past two years,” Michael Brzezinski, Purdue’s dean of international programs, said in an email.

Losing foreign students can carry financial implications for schools that rely on them for revenue. Unlike U.S. citizens, who often get scholarships or discounts, students from abroad are typically charged full tuition.

At Central Missouri, the declines have worsened a budget hole that led to more than $20 million in cuts last year.

At the same time, some other nations have drawn surging numbers of students from abroad. Canada reported a 20 percent jump in 2017, while Australia saw a 12 percent increase. Both countries have set ambitious goals to bolster international enrollments in the coming years.

Yet officials in Australia said they shouldn’t be blamed for America’s slowdown. Phil Honeywood, CEO of the International Education Association of Australia, said pinning it on competition is “pure blame shifting,” adding that Australia hasn’t significantly changed its recruiting strategy over the past two years.

“Rather, everything we hear from prospective students and their education agents in Muslim countries and Latin American nations is that they no longer feel welcome or safe studying at U.S. colleges under President Trump,” Honeywood said in a statement.

Despite the downturn in new students, officials behind the report are optimistic that the U.S. will rebound. While foreign students account for a heavy share of the overall enrollment in Australia and other countries, they account for just 5 percent of all students in the United States.

“The U.S. has real competition,” Goodman said. “What we have going for us, though, is we have more space and capacity.”