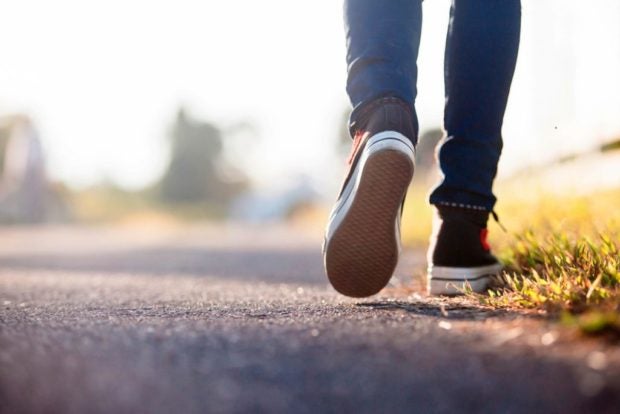 Kadlilakad. That was how we used to refer to walking, when it made more sense time-wise and cost-wise to just walk to where you wanted to go. Don’t have a Cadillac? Just use your feet.

After I moved to the U.S., kadilakad became an important part of my life. Walking has kept me healthy, grounded, sane for more than 20 years now.

I’ve been walking longer than that, of course. But it was in the mid-‘90s that I started to get hooked on walking.

I had been a runner in Manila, but several years of working out at the Quezon Memorial using bad shoes that did little to protect my knees on the concrete path, left me with an injury that ended my running days.

I was living in a small apartment near San Francisco’s Great Highway when I discovered the joy of walking fast on a dirt path running along Ocean Beach. On my best days, my walks were magical, with a soothing sea breeze blowing into my face and a giant golden sun setting in the Pacific.

Walking as a workout has been referred to as brisk walking or power walking. I just refer to it as walking fast. There was a time when I even studied techniques used in Olympic racewalking.

Eventually, I discovered my own pace and technique. Walking became my workout and my time for meditation. I even included walking in my daily workday. In downtown San Francisco where I worked for many years, a quick half hour brisk walk on the city’s steep hills became a perfect midday workout.

When we moved to a suburban neighborhood in the late ‘90s, I found perfect routes in nearby canyons and hills.

But walking is a great exercise for the legs and glutes. It’s also an effective aerobic workout, and ideal for developing leg strength.

Most important of all, especially for one-time runners who stopped due to injury, walking “won’t jar your joints,” making it the perfect low impact workout.

Walking has helped me get through tough times when I reached middle age. The American physician Paul Dudley White once said: “A vigorous five-mile walk will do more good for an unhappy but otherwise healthy adult man than all the medicine and psychology in the world.”

When the midlife blues hit, when the road ahead seems unclear, and life’s meaning becomes unclear, I know of one clear way to lift up my spirits, a long, brisk, quiet walk.